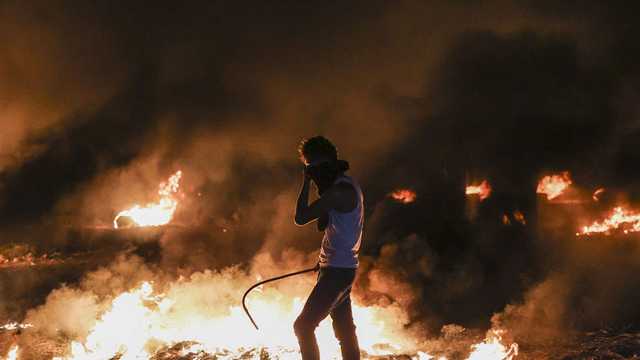 ​A fire incident in Gaza has left at least 21 people, including children, women, and in some cases, entire families. The fire broke out at a residential building at the Jabalia Refugee camp on Thursday.  Iyad Al-Bazm, the spokesperson of Gaza’s interior ministry, said preliminary investigations reveal that a large quantity of gasoline was stored in the four-storey building, causing the fire to spread quickly, killing everyone inside.

The fire was said to have started during a birthday celebration in one of the apartments. Officials said the candles used for the celebration might have caused the deadly incident.

“Deeply saddened by the tragic death of 21 people after a fire broke out in Jabalia Refugee camp, north of Gaza,” The United Nations Relief and Works Agency for Palestine Refugees in the Near East (UNRWA) wrote on Twitter. According to reports, among the dead are at least 8 children, 4 women and 1 retired UNRWA staff.”

Soon after the fire outbreak, ambulances and other emergency services arrived at the scene. Eyewitnesses said they could hear the cries of the burning souls, but there was nothing they could do to help. For over one hour, firefighters struggled to keep the fire under control, but it was already too late to save anyone from the burning house.

Israel and Egypt, which maintains a blockade on Gaza, said they would allow those needing medical treatment into their countries. An Israeli military official said Israel would provide necessary assistance through the transit point.

Gaza has a total of eight refugee camps. Jabalia is one of them. It is one of the most densely populated areas in the world, and home to over 2 million people. Residents in Jabalia have been living under sea, air, and land blockade following restrictions from the Israeli government since 2007.