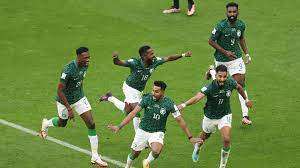 The 2022 World Cup suddenly sprang to life today when a shock of seismic proportions occurred in the opening game of Group C, in the Lusail Stadium just outside Doha. One of the tournament’s strong favourites Argentina, were expected to roll over their first opponents the un-fancied Saudi Arabians, without too much trouble.

However, they reckoned without the fighting spirit of Qatar’s close neighbours, and fell to a 2-1 defeat in front of huge numbers of supporters from each team, who left the game with deeply contrasting emotions.

Many people’s favourites to win the tournament

Argentina came into the competition on the back of a fabulous 35 match unbeaten run, which naturally had them elevated up to the top of the betting charts to be the eventual winners of the trophy. With Lionel Messi orchestrating things, they were the team to fear and very few would have believed the Saudis could live with them.

Indeed, many “experts” dismissed them out of hand and were talking in terms of a complete miss-match, suggesting real thrashing likely to be handed out, possibly bigger than the one that England delivered in their 6-2 thumping of Iran yesterday (November 21).

Everything going to plan in the early exchanges

Everything seemed to be going to script when the Argentines took the lead within ten minutes, as they took advantage of a soft penalty award, after the referee consulted the pitch-side monitor on the instruction of VAR. There was wrestle in the box which the official deemed enough to warrant a spot-kick and Messi calmly slotted home.

Many then settled back to enjoy an avalanche of goals, but the Saudi team had other ideas. They bravely played a very high line to squeeze the South Americans and restrict their space. It was a dangerous tactic which on three occasions was breached and resulted in “goals”, but each time, twice marginally, they were ruled out for offside.

Saudis buoyed by half time scoreline

Half time arrived and the Argentines in the crowd seemed happy enough, probably thinking that the victory was in the bag and the crucial second “killer” goal would arrive sometime in the second half, and the game could be put to bed. The players too, seemed to have an approach where they believed it was just a matter of time and had an almost arrogant air to them, seemingly thinking they were so superior and could get the result they needed, without being fully at it.

Stadium shocked by complete turn around

The Green Falcons on the other hand were encouraged by the fact that they had restricted their heavily backed opponents to a single goal, and that was courtesy of a disputed penalty. They came out for the second half a completely different animal and tore into their illustrious opposition, ranked number three in the world, and were level within two minutes of the re-start.

Saleh Al-Shehri showed good strength to hold off a challenge and neatly place a left-foot finish across the keeper Emi Martinez, and suddenly it was all square. The green half of the stadium were now in full voice and just five minutes later they were in dreamland, and it was their talisman Salem Al Dawsari who put them there.

A high ball at the edge of the penalty area was brilliantly brought under control, then he skipped past two half-hearted challenges, side-stepped a third, before curling a fantastic shot, which Martinez could only help into the top corner of the net.

Fighting for the badge and flag

What followed was a display of national pride on the pitch and in the stands. Bodies were put on the line with blocks, tackles, and interceptions, with the fans singing their hearts out, as the Argentines who had been completely shell-shocked, tried desperately to find a way back.

They couldn’t and the final whistle was greeted with delirium. They had become the first non-European team to beat Argentina at the World Cup since Cameroon did so back in 1990. Possibly a crumb of comfort from that statistic is that they actually went on to reach the final that year.

What went wrong for Argentina?

They definitely missed Giovani Lo Celso in midfield and Messi just couldn’t find the time and space to influence the game as he so often does. There was no creativity, but above all there was no fight. You have to win the battle before you can win the war is a line often trotted out by coaches, and if ever that was the case, it was here.

They were lacklustre to begin with and when they needed to step up the pace, they were found badly wanting and seemed rattled and intimidated. There was no desire, no drive, no intensity, and worryingly, no will to win.

Need to massively raise their game if progress to be made

It was a deeply humbling experience for them and somehow they need to lift themselves for the remaining fixtures against two dangerous sides in Mexico and Poland. Of course things can change very quickly and if this defeat means they end up qualifying second in the group, that could be a blessing in disguise. They will have had to find some sharpness, plus they will find themselves possibly avoiding the Brazilians, which until today seemed nailed on as a definite semi-final match.

In contrast, Saudi Arabian fans can celebrate long into the night. They can be mightily proud of their team; only Ghana of the 32 nations competing in this tournament are ranked lower. They brushed off the blow of conceding early, refused to abandon their high line and were obviously heartened by the fact they had limited Argentina to just one goal in the first half.

They were not given a hope by anyone outside of their country and deserve the highest praise for a sensational victory.