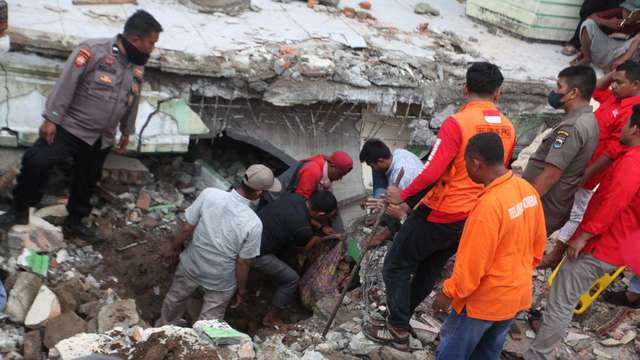 More than 48 hours after a deadly earthquake hit Indonesia, the search for survivors is still ongoing. As of Wednesday morning, rescue operators had reduced the number of missing victims to about 40. Unfortunately, there is also an increase in the number of casualties. The latest death toll stands at 271, while over 1000 have sustained injuries.

Indonesian Disaster Mitigation Agency (BNPB) said Tuesday that about 22,000 houses were affected by the 5.6 magnitude earthquake which struck 12 districts.

“The 5.6 magnitude earthquake affected 12 districts, as many as 6,570 houses were lightly damaged, 2,071 were moderately damaged, and 12,641 were heavily damaged,” the agency wrote on Twitter.

The effort to rescue the missing victims will likely continue for some days, as several bodies are still under the rubble. Families of missing victims and personnel of the Disaster Mitigation Agency are working tirelessly to find missing persons.

“As many as 90 personnel and supporting equipment, including sniffer dogs, were sent to the search point,” The Disaster Mitigation Agency (BNPB) said on Wednesday morning.

In other places, like the village of Cibereum, family members managed to dig through a concrete floor to find the body of the family’s eldest son, who is 28 years old.

“We have to dig through the concrete of the second floor that crushed the victim. But we have seen the body,” a military official, Sergeant Payakun, told the BBC.

Other members of the family survived because they were on a higher floor, but the eldest son was on a lower floor when the house collapsed on him.

President Joko Widodo, who visited the region on Tuesday, said his goal is to rescue the remaining trapped victims.

“My instruction is to prioritise evacuating victims that are still trapped under rubble,” the country’s president said.

After Monday’s earthquake, the Java region continues to experience several shocks. Ridwan Kamil, the governor of West Java, said the region had experienced at least 140 shocks since the disaster struck on Monday.

For each rescued victim, the people rejoice. However, finding something to eat after surviving such a disaster has become a challenge for many. Following the disaster, most families, especially children, are left without food and potable drinking water.

President Jokowi promised to compensate the victims and the affected communities, including those that lost houses and other valuables.

“Children are terrified, and we need to get food, water and shelter to them and ensure they’re not at risk of separation from parents and caregivers,” a spokesperson to Save the Children said.

With the extent of damage, the Indonesian government might have to work for months, if not years, to return the Java region to its original state. Until then, the people of West Java just need what to eat and a safe place to lay their heads.