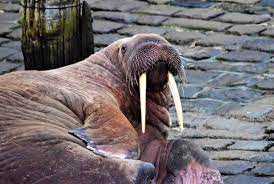 As most towns and cities across the UK celebrated bringing in the new year with dramatic firework displays and lots of general excitement for the first time in three years, after Covid restrictions had meant the last two had to be severely curtailed; one town had to abandon its own plans due to an uninvited visitor taking up temporary residence in its harbour.

Although Scarborough’s show of pyrotechnics would not have been any match for the spectacular event down in London, which attracted over 100,000 people to the Thames Embankment – to watch an amazing 12-minute display which was said to be the largest in Europe – it still promised to be a great night; but the appearance of a huge Walrus to the vicinity over the weekend, persuaded the authorities to cancel at the last minute for fear of causing the animal too much distress.

Once in a lifetime sighting of magnificent creature

It was early on New Year’s Eve when the mammal was first spotted by Stuart Ford, who runs the Sea Life Safari boat tour agency in the popular Yorkshire seaside resort, on the English North East coast. He said: “I was going down to my boat and there it was on the slipway, looking absolutely magnificent.” Before adding: “It has got to be half a ton in weight; I think it is a once-in-a-lifetime, first-time-ever thing to see in this town.”

Council left with no choice but to cancel

Leader of the local council, Steve Siddons said he was naturally disappointed to have to call off the fireworks, but that the “welfare of the walrus had to take precedence.” He added that the final decision was taken after consulting with and consequently listening to the advice of the British Divers Marine Life Rescue (BDMLR), who had been monitoring the marine creature from its first sighting.

Chris Cook, from the BDMLR charity said that it really should not be disturbed so was very appreciative of the authorities agreeing to cancel the planned display. He said: “It is extremely rare that an Arctic walrus should come ashore on the Yorkshire coast”; before reassuring concerned members of the public that the animal just needed time to rest and recuperate before continuing on its way.

RSPCA Inspector Geoff Edmond also had words of comfort for worried onlookers. He said it does not appear to be sick or injured, and encouraged people to enjoy the sight from a respectful distance, reminding everyone that it is a wild animal so any temptation to approach it should be avoided.

Walruses need to preserve energy for long journey’s and lots of unusual noise can be unnerving. They are also obviously unfamiliar with domestic animals so dogs would be especially alarming for them.

The Walrus is actually believed to be the very same marine mammal that drew huge crowds to a south coast beach three weeks ago. That was locally nicknamed ‘Thor’ after resting for a few days around Calshot beach in Hampshire.

Wildlife experts have suggested that the hefty creature is likely to be an Atlantic walrus and was probably an adolescent “vagrant” swimming south alone, and could have travelled from as far as the Canadian Arctic.

Every chance of survival

WWF’s chief polar adviser, Rob Downie said that provided that ‘Thor’ was able to feed on his usual diet of clams and mussels off the seabed, there was no reason why he could not survive in British waters, although he was quick to add that the animal would eventually want to return to colder Arctic waters further north.

Crowds turning out in great numbers

A local Scarborough resident said the crowds in the town attempting to catch a glimpse of ‘Thor’ were evocative of the height of the summer season in the resort. Richard Coulson, 51, said the place was absolutely teeming with cars and people. He added: “We see seals quite regularly round Scarborough coastline, but nothing of that size; it is enormous.”

The creature is known to have also visited the Netherlands, Dieppe and Brittany in recent months. Fully-grown walruses can weigh up to two tonnes, measure as much as four metres in length, and can live for anything up to 40 years.