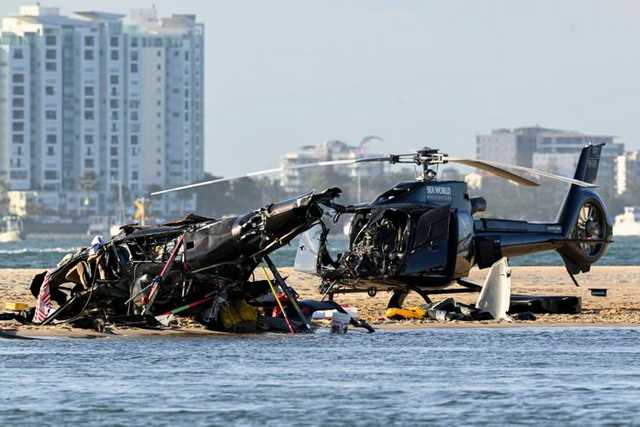 In an unusual crash, two helicopters collided mid-air in Australia, killing four people and leaving three others in critical condition. The incident occurred at about 2 pm local time close to a park on the Gold Coast.

Although officials are still investigating the circumstances that led to the crash, preliminary findings reveal that one of the helicopters was taking off and the other was landing when they clashed mid-air.

“There was a massive, massive bang. It was just huge,” John, an eyewitness, told Melbourne radio station 3AW.

“I’m not sure if it was the propellers or whatever hitting against each other. But there was this poor lady and her son near the helipad in tears,” he added.

Apart from the four deaths recorded, all nine persons in the two aircraft sustained injuries. They are currently receiving treatment. Pictures from the scene showed one of the helicopters lying upside down while the other seems to have landed safely after the clash.

“One airframe had the windscreen removed and it has landed safely on the island, the other airframe had crashed and it was upside down,” Mr Worrell, Queensland Police Acting Inspector, said.

Worell added that it was difficult for emergency workers to gain access to the scene because it was located on the sandbank.

“Due to the area it’s located, on the sand bank, it was difficult to gain access, to get our emergency services to the scene to manage it appropriately,” he said. “Members of the public and police tried to remove the people, and they commenced first aid and tried to help these people to safety.”

Sea World Helicopters, the company thought to be the owner of one or the two helicopters, released a statement soon after the crash, saying they were devastated by the incident.

“We and the entire flying community are devastated by what has happened and our sincere condolences go to all those involved and especially the loved ones and family of the deceased,” Sea World Helicopters said in the statement.

However, the company did not confirm if it owned and operated the helicopters that clashed but added that they are cooperating with the authorities in the investigation process.

Australian Prime Minister Anthony Albanese described the incident as a “tragic” one that shocked most Australians.

“My thoughts are with all those affected, including first responders, and my deepest sympathies are with those who are grieving,” Albanese wrote on Twitter.

At the time of this report, the Australian Transport Bureau had not released any official statement regarding the cause of the crash but said an investigation was underway.