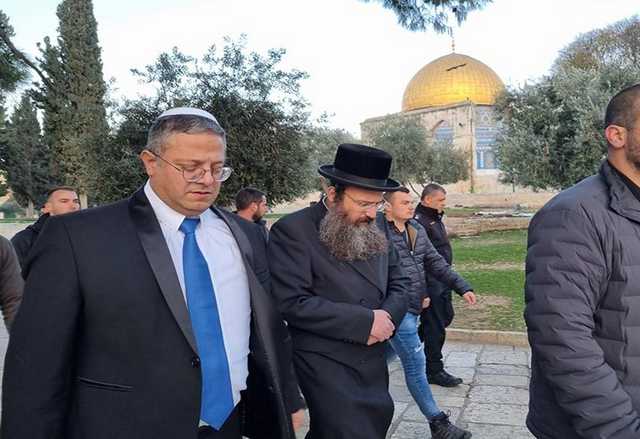 Ben-Gvir, Israel’s new national security minister and far-right lawmaker, has visited the contentious Al-Aqsa mosque in Jerusalem despite warnings that such a visit could lead to violence and the loss of lives. As expected, the move has angered the Palestinians, who described it as an act of aggression.

Hazem Qassem, the spokesperson for Hamas, said Ben-Gvir’s visit to the religious site on Tuesday was “a continuation of the Zionist’s occupation aggression on our sacred places and war on our Arab identity.”

“Our Palestinian people will continue defending their holy places and Al-Aqsa mosque,” he added.

The Al-Aqsa mosque is known to the Jews as the Temple Mount. It is the holiest site in Judaism and the third holiest site in Islam. While it is believed to be the site of two temples mentioned in the Bible, the Muslims call it Haram al-Sharif and believe it is the site of Muhammad’s ascension to Heaven. The question of who rightly owns the site, which is in Jerusalem, remains unanswered.

However, successive Israeli governments have maintained the status quo, leaving the temple to the Palestinians. The Jews and other non-muslims can only visit the site but are not allowed to offer prayers there.

Why Ben-Gvir’s visit is controversial

If Jews are allowed to visit the site, why can’t Ben-Gvir do so? The visit by Israel’s security minister did not break any Israeli or Palestinian law. After all, the territory he visited is still part of Israel, at least for now. Secondly, Ben-Gvir did not pray at the temple in contradiction to the status quo.

The reason for the protests against Ben-Gvir’s visit is that his presence alone at the site threatens the relative peace in the region. Palestinians see the visit as an attempt to change the status quo, which will allow Jews to claim ownership of the site.

Itamar Ben-Gvir is not an average Israeli. His party, the Jewish National Front, is a far-right Jewish religious party that demands tough actions against Palestine and its people, even if it means violently doing so. As a lawyer, he is prominent for defending Jews who have attacked Palestinians and other Arabs. He even calls for the expulsion of Arabs that are not loyal to the State of Israel.

The visitor had in the past faced charges of hate speech against Arabs, and before he joined politics, he had a picture of Baruch Goldstein, an Israeli who murdered 29 Palestinian Muslims in his sitting room.

With a silent but growing demand by Jews to have maximum liberty at the mosque, one visitor that the Palestinians and Arabs, in general, would not want to see at the place is the one that came on Tuesday.

Following the controversies that came with his visit to the site, Itamar Ben-Gvir said no one, including Hamas, could threaten or deter him from visiting the site as it is open to everyone.

“The Israeli government of which I am a member will not surrender to a vile murdering organisation,” Ben-Gvir wrote. “There is a government in Jerusalem!”

On his announcement that he would visit the holy site, opposition leader and immediate past prime minister Yair Lapid warned that the move could result in the loss of lives and called on Ben-Gvir to change his mind. He insisted that the minister of internal security was unfit for the job as his only experience with the Police is that he has been arrested several times.

Although it is still unclear, there are suggestions that Prime Minister Benjamin Netanyahu was uncomfortable with the planned visit, but there was nothing he could have done to stop him.

The visit has come and gone. However, it appeared that it changed nothing on both the Israeli and Palestinian sides.

However, the visit seems to have excited Jewish Israelis who feel there was nothing wrong with a man visiting the holiest site of his religion.

“I’m not a fan of Ben Gvir, but in regards to Jerusalem he’s absolutely correct: if we allow hostile nations to dictate what we can or can’t do in our capital through threats of violence, they’ll proceed to use the same tactic to influence all our domestic policies,” a Twitter user wrote.

“I hate Ben Gvir,” another Jew wrote on Twitter. “But nevertheless, Jews have a right to be on the Temple Mount, him included. There are many reasons why he should be criticized, but wanting to go to the Temple Mount is not one.”