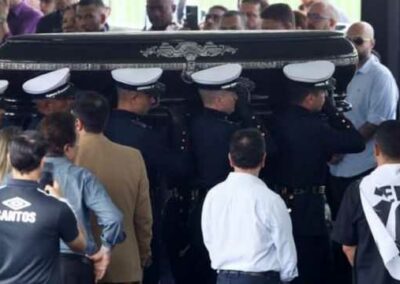 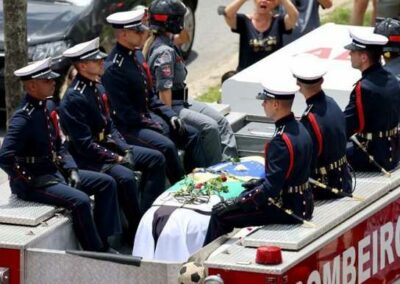 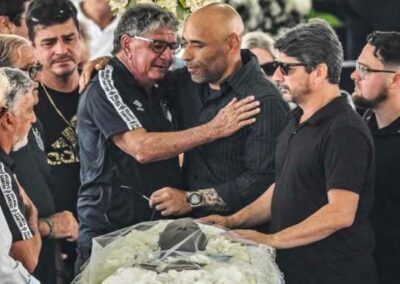 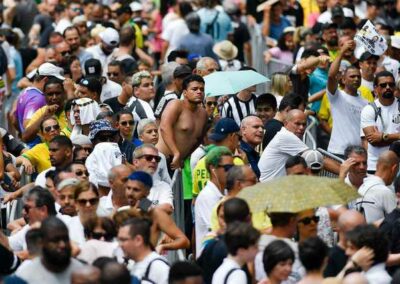 On Tuesday, many Brazilians and visitors from across the world were at the Urbano Caldeira stadium in Brazil, the home of the Pele’s former club Santos. They were not there to watch a football match. They were there to pay the final respect to the King of soccer, Pele, who died on Friday after a long battle with cancer.  As of Tuesday morning, when the gates of the stadium were locked, thousands were still waiting outside to pay their final respect to the legend.

An estimated 230,000 people were in long queues to see the open casket of Pele, who many regard as the greatest footballer of all time.

“Loving Pele is a tradition”

Most of those present during the lying-in-state were Brazilians that were too young to see him play. To them, the love for the Brazilian legend is enough to pass from one generation to another.

“I never saw him play, but loving Pele is a tradition that goes from father to son in Santos,” Claudio Carrança, 32, a Santos supporter, said. “I learned his history, saw his goals, and I see how Santos FC is important because he is important.”

Justice Gilmar Mendes of the Brazilian Supreme Court, a fan of Pele, was also in line to pay the final respect to a man that changed the game in Brazil.

“It is a very sad moment,” Mendes said. “But we are now seeing the real meaning of this legendary player to our country. My office has shirts signed by Pele, and a picture of him as a goalkeeper, also signed by him. DVDs, photos, a big collection of him.”

Others who were not supporters of Santos acknowledged the importance of Pele to Brazilian football and were in line to see the hero’s body for the very last time.

“I am not a Santos fan, neither is my father. But this guy invented Brazil’s national team. He made Santos stronger, he made it big, how could you not respect him? He is one of the greatest people ever, we needed to honour him,” Geovana Sarmento, 17, who waited three hours in the queue, told Marca.

However, for people like Caio Zalke, 35, Pele was more than a great footballer.  “Pele is the most important Brazilian of all time,” Zalke stated. “He made the sport important for Brazil and he made Brazil important for the world.”

Notably present at the funeral was newly inaugurated President Lula da Silva. The 77-year-old leader arrived on Tuesday morning to view Pele’s coffin and pay his final respect. Accompanied by his wife, they consoled members of the family before departing the stadium.

Buried in the heights

After 24 hours in the middle of the Pitch in Santos, it was time to take the King of Soccer to his final resting place. Thousands lined up on the streets to have a glimpse of at least the hero’s coffin. After a mass was conducted at the stadium, the coffin was wrapped with a Brazilian flag and carried by members of Brazil’s armed forces.

The black casket was driven in a firetruck past the streets of Santos, with the crowds singing Pele’s favourite samba songs and the band playing the official song of Santos football club and catholic hymns until it reached the Memorial Necropole Ecumenica cemetery, where that Pele had chosen to be buried.

In a private ceremony attended by only members of the footballer’s family, his body was laid to rest on the 9th floor of the 32 stories cemetery as a tribute to his father, who wore the number 9 jersey during his professional football career.

It was Pele’s wish to be buried in the cemetery, not far from the Santos’ Vila Belmiro stadium, where he played for most of his career. The burial site holds the world record of the tallest cemetery in the world. It is 32 stories building occupying a total of 1.8 hectares of land and could contain up to 16,000 graves.

Every country to name a stadium after Pele

FIFA president Gianni Infantino was also in Brazil for the funeral of the man he described as “the King.” The leader of the world’s football governing body said they would ask every country in the world to name at least one stadium after Pele.

“We’re going to ask every country in the world to name one of their football stadiums with the name of Pele,” Infantino stated during Pele’s wake. “As FIFA, we will pay a tribute to the King.”

While most Brazilians mourned the departure of Pele, it looked like most football stars did not find a reason to attend the wake. Understandably, the arrangements collided with league matches across Europe and the rest of the world, which prevented many footballers from attending. But what about the retired footballers?

“Where’s Ronaldo Nazario? Where’s Kaka, where’s Neymar?” Claudionor Alves, a Brazilian. asked. “Do they think they will be remembered as Pele will? These guys didn’t want to stop their vacations, that’s the problem.”

Although the former stars might have genuine reasons for missing the funeral, their decisions had not gone well with most Brazilians, especially football fans.

“His legacy will outlive us all”

Although Pele has died, many football fans agree that the name Pele will live on as long as the game exists. He is currently Brazil’s joint-top scorer with 77 goals alongside Neymar. Such records will be broken in no time. However, the world is still searching for a player who can win three world cups and score over 1,200 goals.

Even if these records are broken, Pele’s best friend and a former Santos player, Manoel Maria, believes his legacy outside the pitch will outlive everyone now living, as his being a great man surpassed his being a great footballer.

“If I had all the wealth in the world I would never be able to repay what this man did for me and my family,” Maria said. “He was as great a man as he was as a player; the best of all time. His legacy will outlive us all. And that can be seen in this long line with people of all ages here.”