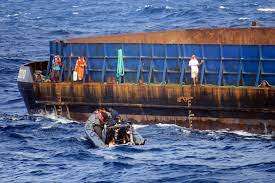 Five people were mightily relieved to be rescued in the Caribbean when the Royal Navy’s HMS Medway responded to an SOS message from an ocean-going tug, which reported that it was sinking off the British Overseas Territory of Anguilla at around 1pm local time (5pm UK time), on Friday 6 January.

The warship is the permanent vessel in that immediate region and had been conducting routine operations on her first patrol of the new year, in seas which at the time were reported to be extremely choppy. They were around 20 miles west of the Netherlands constituent territory of Sint Maarten on the southern part of the island it shares with the French, who occupy the north and which as a consequence, is known as Saint Martin.

The five crew members were brought uninjured, but pretty shaken from a large barge of sand, which their tug had been towing, when they were forced to abandon their boat when it began to flood and had to seek refuge as their craft started to sink. They were transferred to a search-and-rescue boat, which took them to shore at Anguilla.

On the scene in less than twenty minutes

The Medway, with around 50 crew aboard, consulted with the regional Maritime Rescue Coordination Centre in Martinique, and altered course with increased speed, managing to reach the rescue area in less than 20 minutes. Although the temperature was a warm 26C, there were squally showers, coupled with gusts of up to 30 knots (35mph), and waves approaching 1.5 metres (five foot), making it a frightening situation for the stranded tug crew.

Straight in to action in rescue boat

After launching its own sea boat, which a navy spokesperson said was put to the limits of its capability, as recommendations are for it not to go out in winds exceeding 30 knots, or in waves above 1.5 metres.

Medway’s boatswain Petty Officer (Seaman Specialist) Sarah Griffiths was in charge and was also the first person to reach the barge after a cautious approach. She was able to reassure the worried crew of the tug and confirmed that they were all safe and “hugely grateful”.

Executive Officer, Lieutenant Commander Carla Higgins, in temporary command of the 2,000-tonne patrol ship, said: “The whole ship’s company leapt into action as soon as we made the decision to respond and the swift-thinking and actions of the team were fantastic.”

It was confirmed also that although low in the water, the tug had not sunk when Medway left the area to resume her patrol duties.

HMS Medway is deployed across the Caribbean/Gulf of Mexico region and into the Atlantic, all year round, on a long-term mission, ready to respond rapidly should Caribbean communities, and not just the British Overseas Territories, require assistance.

Their standard call for support often comes in the aftermath of natural disasters, particularly during the hurricane season, and last year they proved to be a significant help following two of the strongest storms: Fiona and Ian; delivering vital aid and supplies to struggling communities.

She arrived in the Turks and Caicos Islands just 12 hours after Fiona passed, where a dedicated team helped to repair the perimeter fence around the airport and restore generators at the prison.

Then a matter of weeks later after Ian had powered through the Cayman Islands, they were on the hand within hours, giving additional resources to a stretched region and providing as much care and attention as was required.

They are also kept busy working alongside regional authorities, tackling the drugs trade; indeed only last autumn they made an interception of a massive £24m cocaine shipment, in a combined operation with the US Coast Guard.

Assisting the Antiguans on their big day

Another of the highlights of Medway’s deployment came on Independence Day in Antigua and Barbuda, when the ship’s engineers joined islanders in the Sir Vivian Richards Stadium taking part in community projects and helping with repairs to a care home; as well as demonstrating basic demolition techniques to the local Defence Force, before happily helping the islands to properly celebrate their special day.

Captain Sebastian Cooke RE, Crisis Response Troop Commander, said his team had thoroughly enjoyed the rich experience of helping the Caribbean islands quickly recover from storm damage, commenting: “The versatility and adaptability of the Troop enabled a wide range of support tasks to be completed under tough conditions, and demonstrate the value we are able to add to the Caribbean region.”