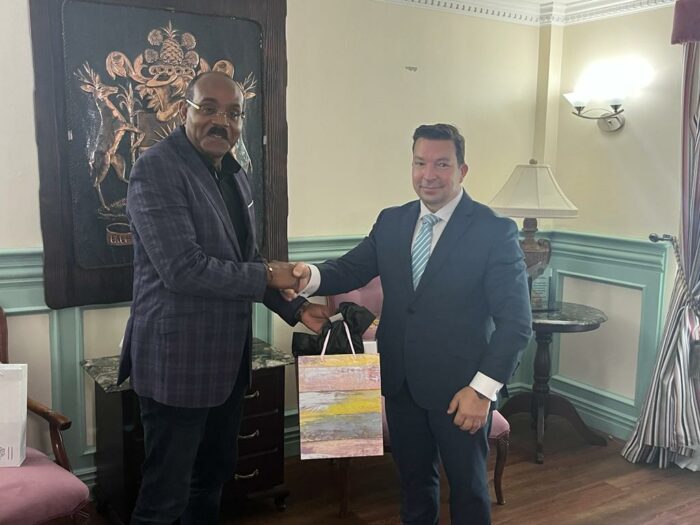 Prime Minister Gaston Browne is leaning on the government of the Czech Republic, to address some vexing issues with the European Union, chief among them de-risking and blacklisting.

Browne told the Czech Republic’s Ambassador to Antigua and Barbuda Miloslav Stašek during a brief meeting on Monday that the EU is creating sanction lists and placing Caribbean countries on these lists, wrongfully so.

“We are compliant with the requirement of the FATF yet still the EU is going outside of the FATF to create its sanction list. I think that’s an issue that requires attention to make sure we do not sully the relationship between the EU and the Caribbean countries,” Browne said.

Meanwhile, Browne said he believes that the Czech government can also assist Caribbean countries who are being threatened by the EU to end their Citizenship by Investment Programs.

Last year, the EU Parliament voted to ask the Commission to formulate a strategy to eventually request CBI programs be phased out in Antigua and Barbuda and all other countries offering citizenship by investment.

In essence, these countries could be given an ultimatum by the EU, to end their Citizenship by Investment Program or face visa restrictions

Browne has written to the EU and now he is asking the Czech government to intervene,

“That is in the area I believe the Czech Republic can assist as well. We are confident that our immigrant visa programs are as transparent as any other including those in Europe and North America. From that standpoint, we believe this kneejerk reaction by the EU is unacceptable,” he said

“But above and beyond that, I think there are a lot of opportunities for us to strengthen relationships between both our countries…” Browne added.

He also talked about future collaboration in training and areas of service delivery.

Browne also stressed, that while relations between the two countries have been very “cordial”, there are serious opportunities for growth to strengthen bilateral ties and the level of cooperation.

Ambassador Stašek said the Czech Republic has asked the government to provide all the information relating to the EU threat, promising to look further into the matter.

He also signaled the need for there to be better collaboration in the field of economic tourism, security, health, water management, and education.