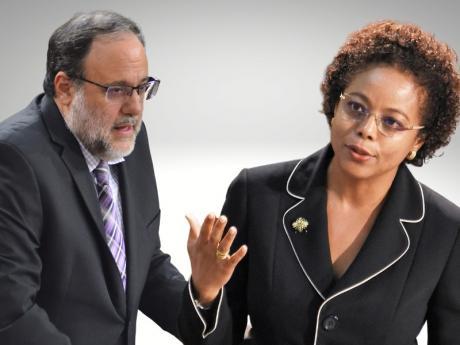 The Opposition in Jamaica is not in support of transitioning Jamaica into a republic or even setting up an economy to bolster the move.

On Tuesday, the Minister of Legal and Constitutional Affairs Marlene Malahoo Forte blasted the parliamentary Opposition for its lack of support.

The committee should comprise representatives of the houses of parliament from the government and opposition, the attorney general, the solicitor general and constitutional law experts, among others.

“The leader of the opposition has advised that concerns he has are such that he will not be naming the members of the opposition to sit on the committee at this time. I don’t think I can express sufficiently to the people of Jamaica how disappointed I am with this position,” Malahoo Forte said.

He accused Golding of harboring suspicions about what the government intends to do with the reform of the constitution.

While Golding is not entirely against the matter, he said the issue of moving from the London-based Privy Council to the Caribbean Court of Justice should be dealt with at the same time the review committee is looking at the republic issue.

“So, it is not a question that I am refusing to nominate members from the Opposition to sit on this committee, but I am asking and I expect and hope to receive the clarity, transparency and disclosure that we want … and that the Jamaican people deserve, as to where the Government intends to go on these important matters,” Golding said.

He wants the matter of Jamaica’s final court to be made a priority of the reform agenda.