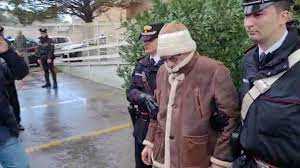 Convicted Mafia boss and Italy’s number one fugitive, Matteo Messina Denaro, was arrested by an elite squad of police officers and members of the armed forces, on Monday morning (January 16) at a private clinic in the Sicilian capital, Palermo. It is believed he had been receiving treatment there for an undisclosed medical condition; although some reports claim he had been regularly attending the facility under a fake name, for a course of chemotherapy.

The man nicknamed “The Ghost” due to his elusiveness, had been on the run for 30 years, but was still considered to be the top boss and in active command of the notorious crime syndicate Cosa Nostra, even whilst in hiding. He was taken away to a secret location initially before appearing before a judge, and faces multiple life sentences for a series of violent killings, on top of his overseeing of money-laundering, racketeering, and drug-trafficking; as well as his involvement in terrorist bomb attacks.

The 60-year-old has been quoted in the past as bragging that he had murdered enough people to “fill a  cemetery all by myself”. Prime Minister Giorgia Meloni, saluted the arrest, declaring it “a great victory for the State, which shows it never gives up in the face of the Mafia”; whilst Italy’s President, Sergio Mattarella, whose brother Piersanti was killed by Cosa Nostra back in 1980, congratulated the minister of the interior and the Carabinieri.

It was early morning when seemingly after a tip off, the Carabinieri approached Messina Denaro to challenge him as to his true identity, due to the fact that there were no known photos of him since the early 1990’s. Apparently without a struggle he admitted who he really was and was immediately taken into custody. It emerged that he had been using the pseudonym Andrea Bonafede – which translates in the Italian language to “good faith” in Italian.

Led away to a background of applause

In video footage released by the Italian media, members of the public are shown standing in the street outside the clinic applauding as the fugitive is led down some steps to a waiting van, wearing a brown leather jacket, a cream hat, and sunglasses, with an expressionless look on his face. It seems officers had secretly moved into the building overnight for the protection of other patients.

In front of a judge

Later in the day at a hastily arranged court hearing in Palermo, a judge asked him some basic questions and for his occupation, he replied “farmer”, and for his residence, he stated Castelvetrano, a town near Trapani, in Western Sicily; the very town where he was born in 1962, as the son of another Mafia boss.

Holds all the key names

He is regarded to be Cosa Nostra’s last “secret-keeper”, with many prosecutors believing that he is in possession of key information and crucially the names of those who were involved in several of the most high-profile crimes by the Mafia.

These include the horrific car-bomb attacks in 1992, which killed anti-mafia prosecutors Giovanni Falcone and Paolo Borsellino, along with bodyguards and policemen, plus Falcone’s wife; for which he was tried and sentenced to life in jail, in absentia.

Also, he was responsible for the organising of the bomb attacks in Milan, Florence and Rome, that occurred in 1993, taking ten innocent lives and injuring many more.

In the same year there was possibly the most shocking of the crimes he is reportedly responsible for, when the 12-year-old son of a Mafioso turned “State Witness”, was kidnapped and subsequently tortured, before eventually being murdered. The boy, Giuseppe Di Matteo, was held in captivity for two agonising years, before he was strangled and his body dissolved in a barrel of acid.

He has long been regarded as the protege of Salvatore “The Beast” Totò Riina, the head of the Corleone clan, who was arrested in 1993 after 23 years on the run. Ironically, Messina Denaro’s arrest comes just a day after the 30th anniversary of that arrest, after spending 30 years on the run himself.

The Italian Mafia boss who set the record for the longest time evading capture was Bernardo Provenzano – nicknamed “The Tractor” as an acknowledgement to him constantly “mowing people down”. He was finally apprehended in a farmhouse near Corleone, Sicily, in 2006, having spent more than 38 years at large.

Evading capture on an island for decades takes some doing

Messina Denaro, has ever since then been the main focus of police searches, but until now has always managed to avoid arrest. It will come as some embarrassment, but no surprise, that all three were tracked down and ultimately arrested in the heart of Sicily,. That is because despite it being the largest island in the Mediterranean, it is still an island when all is said and done.

So to remain hidden for all that time would many believe, require assistance from not just fellow mobsters and family members, but also people in high authority too.

Nevertheless, over the years there have been some close calls to his capture, and with valuable businesses getting seized, he did appear to become more isolated. However, his appearance continued to be an issue and a heavy reliance was placed on Mafia informants, alongside digital reconstructions for facial recognition.

Bizarrely, in 2021, the police thought they had got their man over in the Netherlands, when an English Formula One fan from Liverpool who had travelled over for the Grand Prix, was arrested at gunpoint, in a terrible case of mistaken identity, whilst he innocently waited to be served in a restaurant.

For some time many believed he no longer was in Sicily, or even Italy, with theories of plastic surgery being undertaken to completely alter his look; but on his arrest, other than ageing thirty years, he did not seem to be too different.

Historical development comes as a relief

For a great deal of honest, decent Sicilians, today’s news is a huge relief. Gian Carlo Caselli, a judge and former prosecutor general, said that the arrest was “exceptional” and a “historical event”, which he hoped might lead to significant developments in the ongoing inquiries into the bomb attacks of the early 1990’s.

With a growing number of “turncoats” the Sicilian Mafia found itself significantly weakened and the ‘ndrangheta syndicate, based in the “toe” of the Italian peninsula, has been gradually overshadowing Cosa Nostra, in its reach and overall influence.

This mainland organisation is now regarded as one of the world’s most powerful cocaine traffickers. However, the Sicilian Mafia still run drug trafficking operations, together with lucrative unlawful operations, that see them infiltrate public works contracts and extort small business owners for “protection money.”

The Italian PM Giorgia Meloni offered her warmest thanks to the police forces, and in particular to the Ros dei Carabinieri, the national anti-mafia prosecutor, and to the Palermo prosecutor for as she put it: “the capture of the most significant exponent of mafia crime.” Adding that it was a great victory for the state coming just a day after the anniversary of the arrest of Totò Riina.

Change for the better

For decades Messina Denaro had been a symbol of the state’s inability to get to the very upper reaches of the organised crime syndicates. So this arrest will send renewed optimism of possibly eliminating the Mafia’s powerful hold, or at the very least, make a huge dent in its ability to rule.