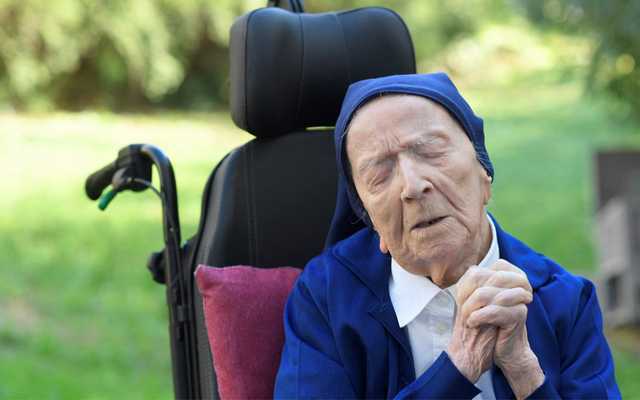 The world’s oldest person, Lucile Randon, has died at the age of 118. The French nun, better known as Sister Andre, died in her sleep on Tuesday at a nursing home in the city of Toulon.

“It is with immense sadness and a lot of emotions that I learn of the death this evening of our Dean of Humanity [Sister Andre] at 118 years old,” Hubert Falco, the Mayor of Toulon, wrote on Twitter. “Born in 1904, Sister André, Lucile Randon by her first name and Christian name, would have been 119 years old on February 11th.”

Lucile Randon was born on February 11, 1904. Until her death on Tuesday, she was the world’s oldest known person according to the Gerontology Research Group’s (GRG) World Supercentenarian Rankings List.

For a long time, she was the oldest person in Europe. Following the death of the immediate past world’s oldest person, Kane Tanaka of Japan, at the age of 119 last year, Randon became the new oldest person. The Guinness World Records recognised her status in April 2022.

During her 116th birthday, she told AFP in an interview that one of her fondest memories was when her two brothers returned home at the end of World War I.

“It was rare, in families, there were usually two dead rather than two alive. They both came back,” she said.

In the final years of Randon, she became blind and needed a wheelchair. However, she was described as one who’s always looking out for how she could help others. At the nursing home where she lived until her death, she cared for other old people. As the world’s oldest person, that means she was caring for other old people that were younger than her.

“People say that work kills, for me work kept me alive. I kept working until I was 108,” she said last year. “People should help each other and love each other instead of hating. If we shared all that, things would be a lot better.”

Sister Andre became a Catholic at the age of 26. At 41, she joined the Daughters of Charity Order of nuns. She was assigned to a hospital in Vichy, France, where she worked for 31 years.

“France is losing a nun with a big heart, who generously shared her experience of life. She had drawn during her existence rich in encounters and experiences, immense wisdom and an infinite love for others,” Hulbert Falco wrote.

Who is next in line?

Although there is no official oldest person now, Marie-Rose Tessier, another French woman from Vendee, is likely the next in line to replace Sister Andre. Even if she becomes one, there are arguments that there are older people elsewhere, whose ages are unknown.