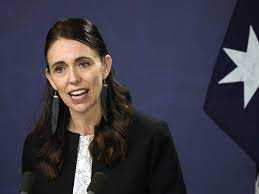 New Zealand’s prime minister Jacinda Ardern has announced that she is to step down from her role as leader by 7 February, after what she described as nearly six “challenging” years in the top job.

The 42-year-old broke the news in an emotional speech, saying that her time in the position had taken its toll and that she no longer had “enough in the tank” to continue; especially with this year’s election in mind.

She had become the youngest female head of government in the world when she was elected back in 2017, at the age of 37. Just a year later she joined Pakistan’s Benazir Bhutto in becoming just the  second elected world leader to ever give birth while in office.

She successfully steered the country through the Covid-19 pandemic and remained the calming influence in both the aftermath of New Zealand’s worst ever terror attack in the dreadful Christchurch mosque shootings, as well as literally the fall-out from the deadly volcanic eruption.

The Labour Party MP’s will vote to find her replacement on Sunday 22 January, with indications in the polls suggesting that the party faces a tricky period in the months ahead, if they are to stay in control after the October election. If no would-be successor is able to secure sufficient support – which needs to be two-thirds of the party room – then the vote will go to the Labour membership.

Ms Ardern had risen through the ranks to become the country’s youngest PM since 1856. A brief spell in the UK working in Tony Blair’s Cabinet Office saw her return as an elected MP, firstly championing the eradication of child poverty and then supporting gay rights; the latter to such an extent that she left the Mormon church over its negative stance on the subject.

Turned around the party in less than two months

She was thrust into the role as opposition leader a mere seven weeks before the 2017 election. At that time, they were trailing badly in the polls and looked to have little chance of winning, but by the time New Zealanders had been to the ballots Labour had secured the second highest number of votes, enabling her to form a minority government, via the proportional representation system.

Her popularity grew very quickly amongst other leaders around the world, and won praise at home when wearing a korowai, more commonly recognised as a Maori cloak, when meeting with the late Queen Elizabeth II. Along with her partner, television host Clarke Gayfield, the couple gained a huge amount of respect when they announced her pregnancy and that he was to become a stay-at-home father.

It was in March 2019, however, that her popularity really surged when her empathetic approach brought the country together, following the shocking Christchurch mosque attacks, which left 51 people dead. She was seen comforting the bereaved, and immediately announced a change to the country’s gun laws, banning the sale of all semi-automatic weapons and assault rifles.

Leading a country in mourning

This was quickly followed by the tragic events in December of the same year when a volcano erupted on the privately owned White Island, or Whakaari. Seventeen people, mostly tourists from the US and Australia, sadly perished. Ms Ardern won a great deal of praise from both those countries, as well as New Zealanders, for the way in which she led a period of mourning.

However, it will be the swift reaction to the global pandemic that won the most plaudits. After a man in the Philippines died from contracting Covid-19 at the beginning of February 2020, and in so doing became the first person outside of China to lose their life to the virus, Ms Ardern introduced the policy whereby any foreigner coming from or via China, was automatically forbidden entry. Also, any New Zealander returning from China had to isolate for 14 days.

As the spread of the virus escalated, so too did the restrictions put in place. From midnight on 16 March, everybody, including the New Zealand public, were required to go into self-isolation upon arrival from outside the country. Ms Ardern made no apologies for adopting the strictest regulations anywhere in the world, and just a matter of days later she took the unprecedented step of closing the borders to practically all no-citizens, or residents.

It was a massive success and by June there were no new community transmissions and as a result lockdowns were able to be lifted and everyday life more or less returned to normal, albeit with some social distancing; but crucially with borders remaining closed.

The economic pain was slightly higher than in other countries, but the outcome was a very free and healthy existence, for which the general public were extremely grateful.

Jacinda Ardern gained what could almost be described as star-status in the global political world, but after leading Labour to a landslide election victory in 2020, on the back of her swift pandemic actions, the Party’s and her own popularity has sunk to its lowest since she was first elected. Nevertheless, Ms Ardern stressed that her resignation was not because of either of those facts, but more that she believed they need a “fresh set of shoulders for that challenge.”

Kindness is a strength

She she said she hoped her legacy in New Zealand would be “as someone who always tried to be kind”, adding that it is possible to show kindness alongside being strong, and empathetic, whilst at the same time being decisive, optimistic, and focused.

She ended her address by insisting that it is important to be “your own kind of leader; one who knows when it’s time to go.” With obvious emotion she concluded that the past five-and-a-half years had been the “most fulfilling” of her life, but the catalogue of events and continual nature and sheer weight of them, had been extremely “taxing”.

The announcement has been greeted by other world leaders with shock and appreciation for the job she has undertaken with great determination and dignity.

Australian PM Anthony Albanese described Ms Ardern as a leader of intellect, strength and empathy. Writing on Twitter he said she has been: “a fierce advocate for New Zealand, an inspiration to so many and a great friend to me.”

Canada’s leader Justin Trudeau said she had made an “immeasurable” difference to the world.

Opposition leader Chris Luxon recognised the difficulties she had faced when thanking her “for the service she gave to New Zealand, in an incredibly demanding job,”

New Zealand’s Jurassic Park actor, Sam Neill, said Ms Ardern had faced “disgraceful treatment” from “bullies” and “misogynists”, before adding that she deserved “so much better”.

There is no doubt, from comments made not only after Ms Ardern’s announcement today, but also throughout her period in office, that she will leave with a huge amount of best wishes, and appreciation for a job well done, often in the most trying of circumstances.