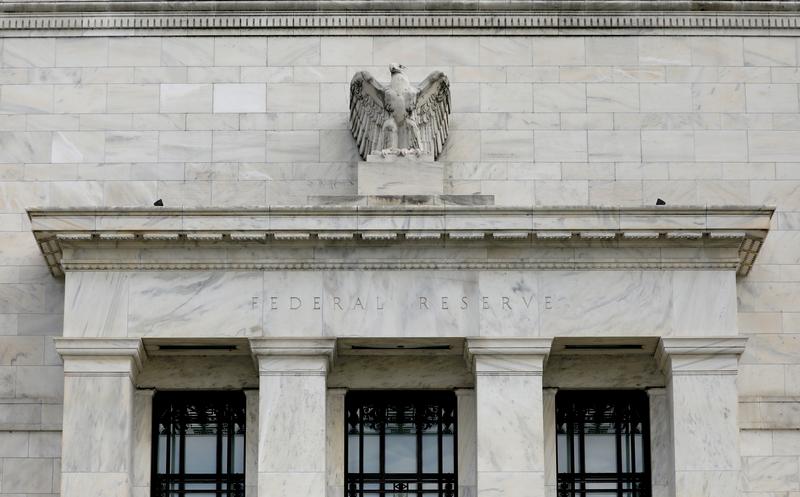 The timing of the Fed’s U.S. tapering plans remains the key question and recent data suggests caution may be warranted: the U.S. economy created the fewest jobs in seven months in August and consumer prices increased at their slowest pace in six months.

Several officials say the Fed’s tapering of its pandemic stimulus will start this year, a view Fed chief Jerome Powell may echo, while stressing an interest rate rise is still way off.

The Bank of Japan, which also meets on Tuesday and Wednesday, will keep policy steady but could well warn of growing risks to exports from supply disruptions.

2/ THE FIRST AND THE LAST

Confirmation that a major central bank is raising interest rates rather than just talking about it will be significant for markets hooked on cheap cash. On Thursday, Norway’s central bank is set to become the first from the developed world to hike rates since the pandemic, likely raising its main 0% rate to 0.25%.

The Bank of England is unlikely to change policy but with consumer price growth at a 9-year high in August, traders are pricing a rate rise next May. The BoE may signal at its Thursday meeting whether or not it still views inflation as transitory.

We will hear from the laggards too — Switzerland is not expected to begin shrinking its balance sheet or lifting rates, the world’s lowest, until long after the others. Sweden is forecast to keep rates at 0% until 2024 but its monetary policy announcement on Tuesday may well reflect a rethink after strong inflation readings.

Cash-strapped Chinese property developer Evergrande needs to come up with $120 million worth of bond coupon payments.

That such a tiny amount could be the tipping point for a $355 billion behemoth with more than 1,300 developments across China and over $300 billion of liabilities shows how bad things are.

China’s no. 2 developer has been scrambling to raise cash, with fire sales on apartments and stake sales in its sprawling business network, but with little success.

As it teeters between a messy meltdown, a managed collapse, or – least likely – a government bailout, the risk of contagion is in focus. Evergrande’s Hong Kong-listed shares plunged on Monday as much as 19% to their lowest since 2010; an index of Chinese high-yield dollar debt index is at a 17-month trough. 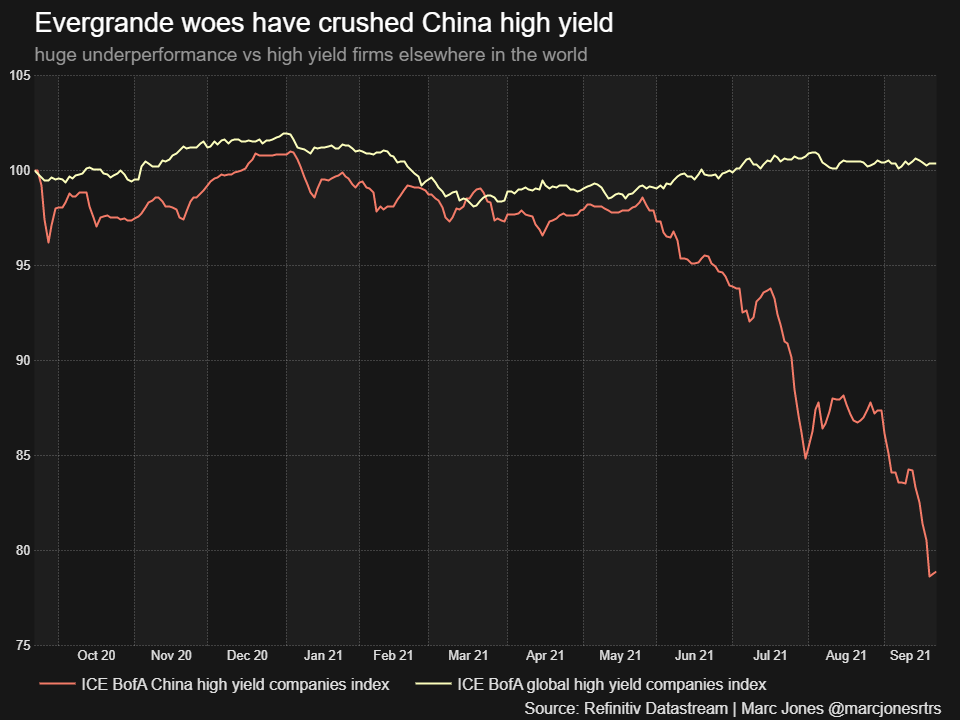 Purchasing managers indexes, an oft-used gauge of economic growth and corporate sentiment, are running well above historical averages but advance readings for September — due Thursday in many countries — will likely show PMIs edging further off the highs hit earlier this year.

The Delta COVID-19 variant, supply chain bottlenecks and soaring input costs have been showing up in PMIs in recent months. IHS Markit’s euro zone manufacturing PMIs for instance slipped in August to 61.4 from 63 in July, and are expected to ease further this month to 60.5.

A JPMorgan composite global PMI index was at 52.6 in August, six points off record highs hit in May. These are still healthy readings, above the 50 mark that separates growth from contraction, so central bankers meeting in coming days probably have no cause to fret just yet. 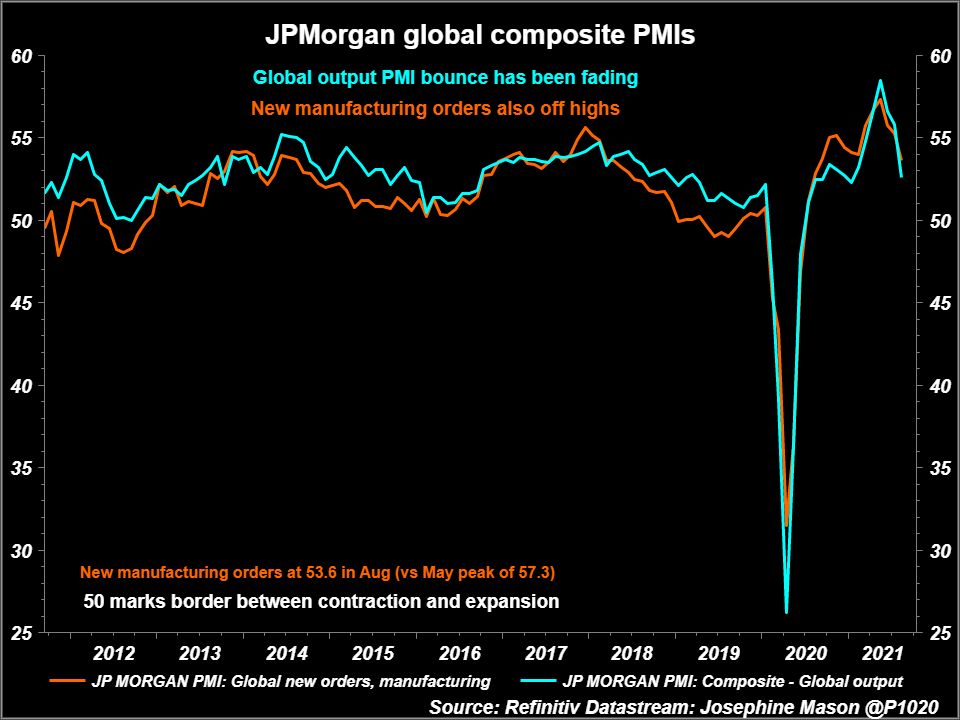 Ahead of Monday’s vote, Trudeau’s Liberals are virtually tied with the opposition Conservatives, raising the prospect that no party will be able to form even a stable minority government.

The prospect of a deadlock that hampers Ottawa’s response to COVID-19 is causing some anxiety – Canada’s dollar has shed 1% since Trudeau called the vote in mid-August (two years before schedule) and stocks are near three-weeks lows. 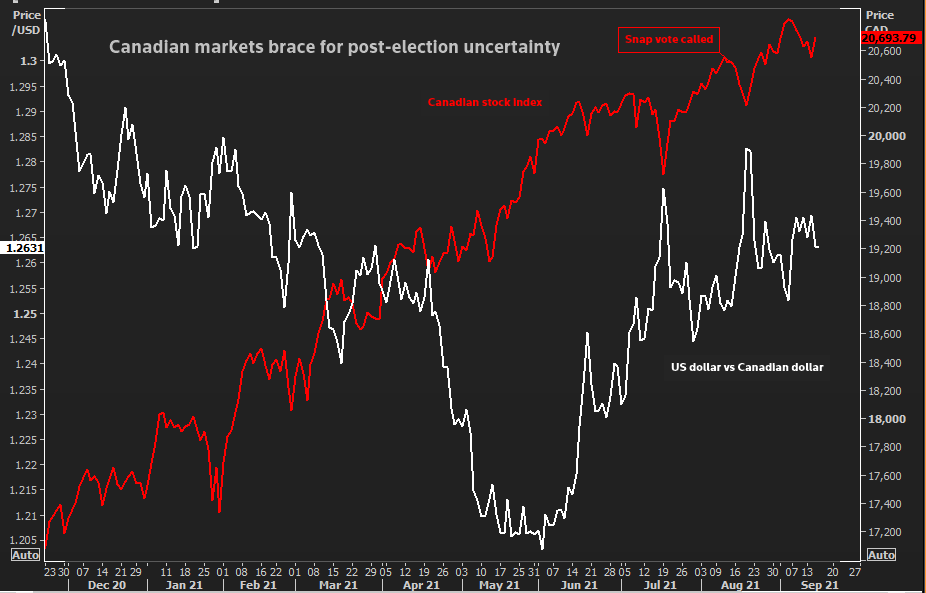