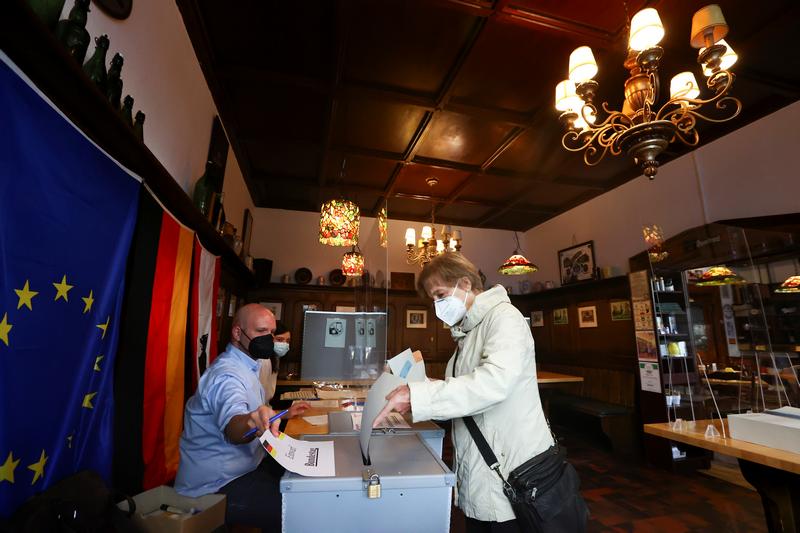 A woman casts her vote in the general elections, in Berlin, Germany, September 26, 2021. REUTERS/Fabrizio Bensch

Germany’s election produced a narrow win for the Social Democrats over Angela Merkel’s conservatives, projections show, but exit polls conducted for broadcasters on Sunday suggested voters had relatively clear ideas about the outcome they wanted to see.

SOCIAL DEMOCRATS WITH AN EDGE

An Infratest dimap poll for ARD showed 38% wanted the SPD to lead the next government, compared to 28% rooting for the conservatives, and more than half wanted the liberal Free Democrats and Greens to be part of it.

The SPD’s Olaf Scholz was preferred Chancellor candidate for 45% of voters, while the conservatives’ Armin Laschet was preferred by 20%.

While the Greens’ Annalena Baerbock was the favourite of just 14%, 20% thought her party had “the best answers to the questions of the future”, compared to 18% for the SPD and 14% for the conservatives.

Worryingly for whoever succeeds in building a coalition, 60% of those polled by Forschungsgruppe Wahlen in their exit poll for broadcaster ZDF thought nobody would succeed in filling the gap left by Angela Merkel when she leaves after 16 years in office.

The same poll showed a sharp generational divide, with younger people leaning more towards the Greens and the pro-business liberals, and the over-65s – a large section of one of the world’s oldest societies – leaning towards the SPD and the conservatives.

ZDF estimates the Bundestag will have 740 members – up from 709 in the last parliament. A side-effect of Germany’s complicated electoral system https://www.reuters.com/world/europe/making-elephants-dance-guide-germanys-electoral-system-2021-09-23 is that parliament can vary wildly in size. If the Linke, hovering on the 5% threshold, fail to get in, parliament could end up being smaller.

The Greens failed to live up to their performance at the start of the campaign, when they vied with the conservatives to top polls. But they have given the SPD a close run in its longtime stronghold, Berlin: polls suggested they are running the SPD a close second in the city state.

In South Thuringia, a controversial hard-right former domestic spying chief https://www.reuters.com/world/europe/blunt-outsider-heart-conservative-germanys-election-dilemma-2021-08-27 appears to have failed to win a seat as a conservative. Polls suggest Hans-Georg Maassen, who was forced to step down as Germany’s chief Nazi hunter, is running behind local hero Frank Ullrich, a former East German ski champion, who is the SPD’s candidate.

The SPD’s Scholz and the Greens’ Baerbock were running head to head in an electoral district in Potsdam, a baroque city just outside Berlin. There, Scholz has soundly beaten Baerbock, winning 34% of the votes to her 19%. Both will sit in parliament regardless, but the defeat underscores Baerbock’s failure to capitalize on her early advantage.

But Armin Laschet is behind in his own state: in North Rhine-Westphalia, the Netherlands-sized western state of which he is premier, the conservatives are running three percentage points behind the SPD, according to exit polls.

With Merkel stepping down, her own seat, in the windswept Baltic Sea state of Mecklenburg-Vorpommern, was up for grabs. She had held it since it was created in 1990. This time it looks set to swing to the SPD.