BUCHA, Ukraine (Reuters) – Sobbing uncontrollably, Serhii Lahovskyi nuzzles against the shrouded corpse of his closest childhood friend, who disappeared when Russian troops occupied the Ukrainian town of Bucha near Kyiv and was found shot through the head and dumped in a stairwell.

The labourer’s eyes cloudy and half open, black and crimson streaks of blood caked on his face and snaking down to his lips from an exit wound that cracked his skull, Igor Litvinenko had been shot through the mouth at very close range. He was found by local residents just days before his 30th birthday.

Dried clots of blood filled his nostrils. And his torso was covered with bright red welts, which Lahovskyi believes resulted from a beating. He was dumped together with another man who was found mutilated. His wife and other residents said the man who was mutilated had been taken prisoner by Russian troops who invaded Ukraine.

Reuters cannot independently verify the details of their accounts.

Litvinenko had been visiting his mother to bring her food when he disappeared.

“Why did these animals shoot him so?” Lahovskyi said on Tuesday, his eyes wide and reddened, gesturing with his hand to say they had been best friends since they were knee-high. “This is not Russia, this is a monster.”

“Just point-blank. Why is it needed? Tell me please.”

He and fellow residents in a housing complex in the ravaged town of Bucha, where Reuters has found a trail of what officials say are extra-judicial killings since Russian troops pulled back last week, grabbed shovels and dug a shallow grave on a grass verge by one housing block.

Then they used a carpet to carry the remains, placing him in the ditch, folding it over him and covering him with wooden boards, before shoveling earth on top.

Panting heavily after digging the grave, shaking his head in dismay, local locksmith and odd-job man Urii Churachenko bent down and placed two cigarettes in the earth as a token for his friend. 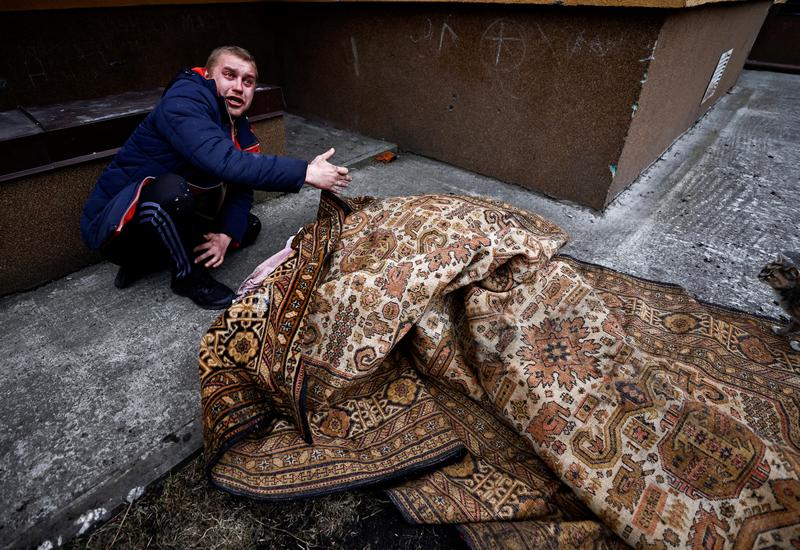 Serhii Lahovskyi, 26, mourns by the body of his friend Ihor Lytvynenko, who according to residents was killed by Russian Soldiers, after they found him beside a building’s basement, amid Russia’s invasion of Ukraine, in Bucha, Ukraine April 5, 2022. REUTERS/Zohra Bensemra

“I have known him since childhood,” he said. “We have lived through everything together. He is our colleague, our brother-in-arms. Let them burn in hell. That’s it.”

Reuters has seen at least four victims shot through the head in Bucha, one with their hands tied behind their back.

Residents have recounted cases of several others slain, some shot through their eyes and one apparently beaten to death and mutilated.

Officials say they have found more than 300 dead so far.

Ukrainian officials say Russia has committed genocide and have called for an investigation by the International Criminal Court.

The Kremlin dismisses the allegations as propaganda. Russia’s U.N. Ambassador Vassily Nebenzia told the Security Council on Tuesday that Russian troops are not targeting civilians, dismissing accusations of abuse as lies. He said that while Bucha was under Russian control “not a single civilian suffered from any kind of violence.”

In Bucha, Liudmyla Verhinska cried as she recounted how she found her 32-year-old son was slain, shot through the eye. He worked in anti-terrorism unit and is now buried on another small patch of grass near the housing complex.

“He went just to take out the trash and he was shot. After seven days, I found him,” she said. “And today I found his friend… What else to tell you?”. 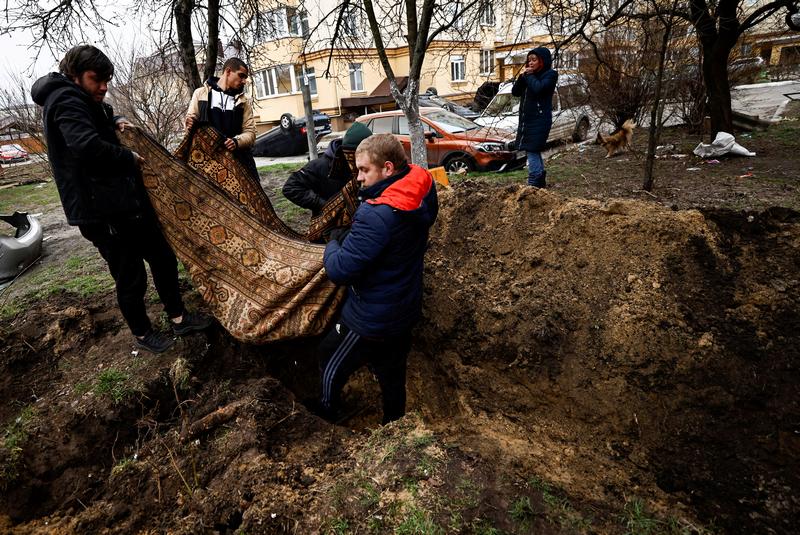 Serhii Lahovskyi, 26, and other residents carry the body of Ihor Lytvynenko, who according to residents was killed by Russian Soldiers, after they found him beside a building’s basement, to bury him at the garden of residential building, amid Russia’s invasion of Ukraine, in Bucha, Ukraine April 5, 2022. REUTERS/Zohra Bensemra