Ukraine and Russia What you need to know right now 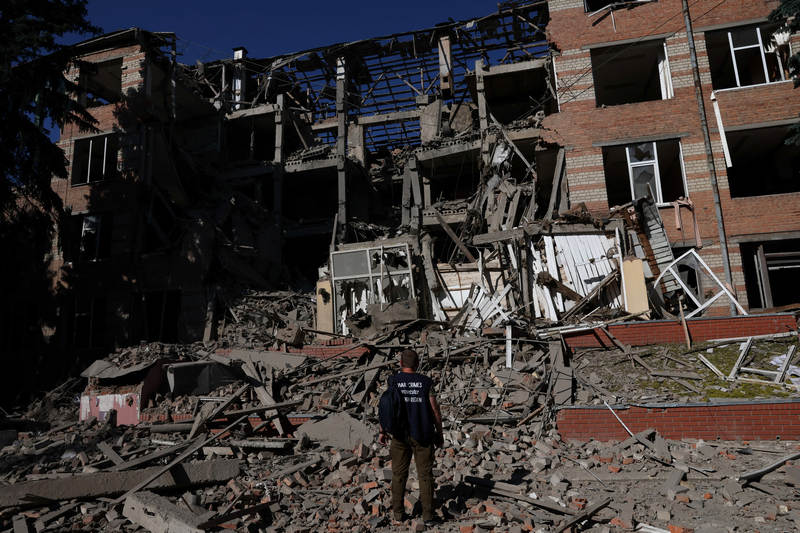 A worker from the war crimes prosecutor’s office takes in the damage from overnight shelling that landed on a building of Kharkiv’s Housing and Communal College as Russia’s attack on Ukraine continues in Kharkiv, Ukraine, June 21, 2022. REUTERS/Leah Millis

(Reuters) – Ukrainian troops will “have to be withdrawn” from the mostly Russian-occupied battleground city of Sievierodonetsk in eastern Donbas, the regional governor said on Friday.

* Luhansk Governor Serhiy Gaidai said Ukrainian forces will have to leave Sievierodonetsk, but did not indicate if troops would be withdrawn immediately, or over what time frame any withdrawal would happen.

* Authorities in the town of Derhachi, to the northwest of Kharkiv, said heavy Russian shelling had knocked out most of the electrical and natural gas supply.

* In Ukraine’s south, three cruise missiles hit the port city of Mykolaiv on Thursday, while two more were shot down near Odesa, the Ukrainian armed forces said.

* Reuters was unable to independently verify the situation on the ground.

* The United States will provide an additional $450 million in security assistance to Ukraine, including more long-range rocket systems, U.S. officials said on Thursday.

* EU leaders formally accepted Ukraine as a candidate to join the bloc on Thursday.

* The EU should stop adding sanctions on Russia and instead push for a ceasefire and the start of negotiations, a senior aide to Hungarian Prime Minister Viktor Orban said on Thursday.

* Prime Minister Boris Johnson said Britain was willing to help with demining off Ukraine’s coast and may offer insurance for ships to ease grain exports.

* The G7 rich democracies will seek to show long-term support for Ukraine at a summit starting on Sunday.

* Turkey said it was investigating claims that Ukrainian grain was stolen by Russia and shipped to countries including Turkey, although no stolen shipments had been found so far. Russia has previously denied theft allegations.

* A dozen EU countries have now been affected by cuts to gas supply from Russia, the bloc’s climate policy chief said.

* Ukraine held on Thursday a preliminary hearing in its first trial of a Russian soldier charged with raping a Ukrainian woman during Russia’s invasion, the first of what prosecutors say could be dozens of such cases.

* “Ukraine’s future is in the EU,” Zelenskiy wrote on Twitter.

* “Ukraine will prevail. Europe will prevail. Today marks the beginning of a long journey that we will walk together,” EU foreign policy chief Josep Borrell said.