Sunday was neither a good nor lousy day in France as voters selected their representatives in the French Parliament. At the end of the historic election, Emmanuel Macron’s party lost its majority seats in parliament. The result of the election has generated mixed reactions in the country as some see it as a breakthrough for democracy, while others see it as a challenge to democracy.

At the end of the elections, the Ensemble, Macron’s party, won 245 seats, NUPES, the most recent coalition, won 131 seats, RN, Le Pen’s party, won a record-breaking 89 seats, while the Republicans won 61 seats.

Although the ruling party has managed to win the highest number of seats in the parliament, it fell short of the 289 majorities required in the house. With 577 members in parliament, the ruling party needed to win half of the seats plus one before bills sent in by the President can go through.

Reacting to the election, French Prime Minister Elisabeth Borne said the Country stands at risk and that France had never faced a similar situation in the 5th Republic.

“This situation represents a risk for our country, given the risks we’re facing nationally and internationally,” she said.

“The national assembly has never faced a configuration of this type in the 5th Republic,” she added.

While the ruling party is confused about how best to handle the situation, opposition parties are excited that they were able to stop a rubber-stamp parliament that Macron enjoyed during his first five years as President.

It is a totally unexpected situation, absolutely unheard of, the collapse of the presidential party. It is total, and no majority is presented,” Mélenchon, leader of the NUPES said.

“We have achieved the political objective that we had set ourselves, in less than a month, to bring down the one who, with such arrogance, had twisted the arm of the whole country, who had been elected without knowing what for,” he added.

The NUPES was a new coalition with Jean-Luc Mélenchon as its leader. After the Presidential elections, Melenchon formed the coalition intending to win the majority of seats in Parliament. Unfortunately, it did not achieve that goal, but at least it prevented the ruling party from having the majority of seats. This alliance is said to be the largest coalition in the history of France.

After the results, Le Pen also addressed her supporters. She said her party is going to be a responsible opposition.

“We will incarnate a strong opposition, which does not connive, but a responsible opposition, which respects institutions and is always constructive because our one and only compass is the interest of France and the French people,” she said.

Le Pen’s party, the National Rally, pulled a surprising result from Sunday’s elections, winning 89 seats. The party has less than ten parliamentarians in the last government.

Le Pen said on Monday said that her party’s success in the polls will not make the country ungovernable.

“The country is not ungovernable, but it is not going to be governed the way Macron wanted,” she said.

Some citizens have criticized the methods adopted by Macron in leading the country. Some feel he has handled the country as his property because he had a parliament working in his favor.

THE CHALLENGE OF FORMING A MINORITY GOVERNMENT

The French government is not familiar with formidable opposition. What even made this more difficult is that Macron is still the President. Macron has planned a lot of reforms in his second term as President, and the far left and right are against these changes. Forming a consensus with the same people that do not agree with his policies will be very challenging. Unfortunately, he had no other choice.

The French Prime Minister disclosed on Sunday that the party could reach out to elected MPs for possible cooperation in the Parliament.

“We will work as of tomorrow to build a working majority. There is no alternative to this to guarantee our country’s stability and carry out the necessary reforms,” Élisabeth Borne said.

Some experts have suggested that the ruling party could strike a deal with the Republicans. However, the leader of the Republican party Christian Jacob has stated that they were elected as opposition and will remain as such.

Macron had promised to raise the retirement age in France and cut taxes. He also promised other reforms which will now be difficult to achieve.

Some key members of Macron’s government have lost their seats, and Macron will have to reshuffle his government shortly. Macron, who once compared himself to Jupiter, will now learn humility, compromise, and consensus if he wants to succeed in his next five years as President. 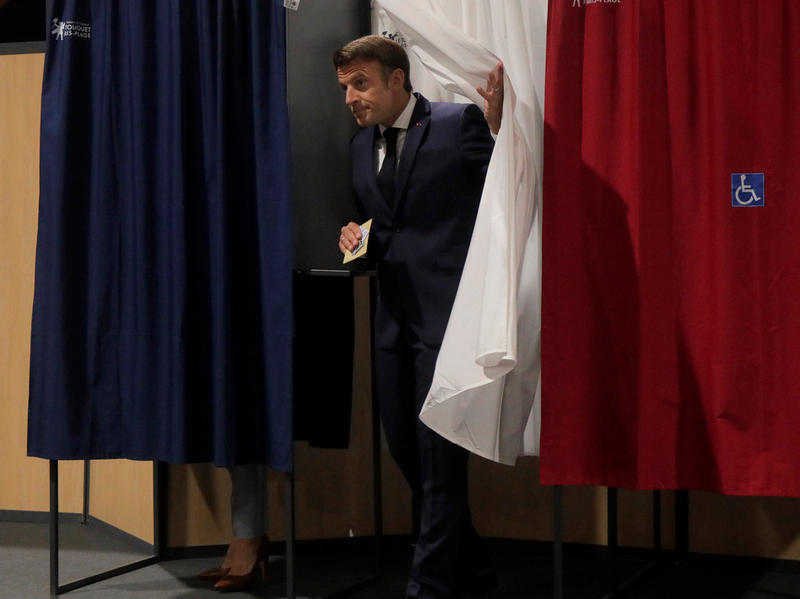 French President Emmanuel Macron leaves the voting booth Sunday, June 19, 2022 in Le Touquet, northern France. French voters are going to the polls in the final round of key parliamentary elections that will demonstrate how much legroom President Emmanuel Macron’s party will be given to implement his ambitious domestic agenda. (AP Photo/Michel Spingler, Pool)