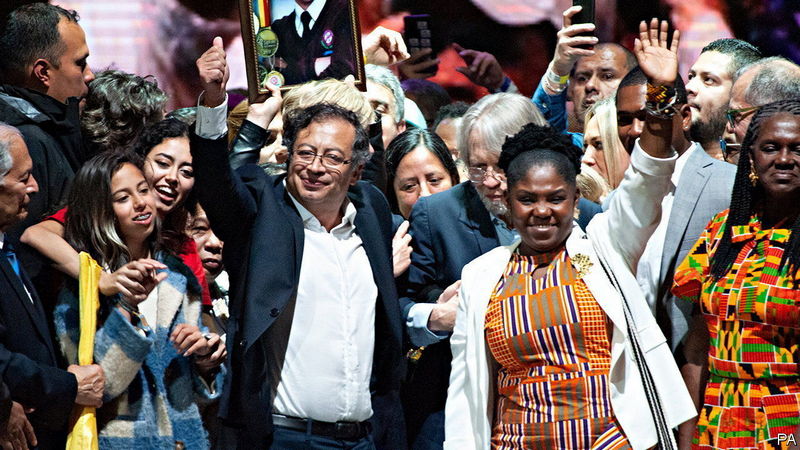 For the first time in over 100 years, Columbia elected its first left-wing President on Sunday. Former rebel Gustavo Petro defeated billionaire businessman Hernandez Suarez in a closely contested 2nd round of the election.

It took Petro three attempts before finally winning the Presidential election after he contested in 2010 and 2018. He scored the highest number of votes that any candidate has scored in a Columbian Presidential election. Petro promised to resign from politics if he failed this time, but after a formidable campaign, he will now become the President of Columbia.

The former guerilla no doubt won the election based on his promise to bridge the gap between the rich and the poor. Petro, during his campaign, promised to increase the tax of the wealthiest four thousand Columbians to redistribute wealth to the poor. He vowed to declare a state of emergency on the dwindling Columbian economy once he become the President and promised to give the country back to the poor.

Reacting to his victory, the President-elect said his election means the real change has come.

“What is coming here is real change, real change. That is what we are committing our lives to. We will not betray the electorate that has demanded that Colombia change from today,” he said.

The President-elect also took to social media to celebrate his victory with his supporters.

“Let’s celebrate the first popular victory. May so many sufferings be cushioned in the joy that today floods the heart of the homeland,” Petro tweeted after he was declared the winner of the presidential election.

Various individuals were scared his opponent would reject the election results. They were proven wrong when runner-up Hernandez Suarez conceded defeat and congratulated Petro.

“I accept the result as it should be if we want our institutions to be strong. I sincerely hope that this decision that has been taken is beneficial for all and that Colombia is heading towards the change that prevailed in the vote in the first round,” he said.

“I hope that Gustavo Petro will know how to lead the country, that he will be loyal in his discussion against corruption, and that he will not disappoint those who chose him,” he added.

The U.S Secretary of State Antony Blinken also sent a congratulatory message to the President-elect.

“On behalf of the United States, I congratulate the people of Colombia for making their voices heard in a free and fair presidential election. We look forward to working with President-Elect Petro to further strengthen the U.S.-Colombia relationship and move our nations toward a better future,” Blinken said.

Gustavo Petro, in his campaign,  said he would renegotiate the relationship with the United States, which is a close ally under the leadership of the current president.

Other campaign promises of Petro include the diversification of the economy from oil and agricultural reforms, and he promised to establish a ministry of equality to bridge the gap between the rich and the poor in the country.

PETRO AS A REBEL

The president-elect of Columbia has not always been a politician. At a time, he was a guerilla convicted for possessing firearms. He joined the Colombian revolutionary organization movement when he was 17 to oppose the government. He was jailed for 18 months in 1985. After his jail term, he formed a political party that contested the 1991 elections. His party won several seats in the Chamber of Representatives.

Since then, Petro has held different political positions. He served as a Senator, representative in the Chamber of Representatives, and mayor of Bogota before contesting the Presidential elections twice.

The election is not only the first time electing a leftist as President but also the first time a black female was elected vice president. Francia Elena Márquez Mina, 41, is a Columbian human-rights and environmental activist. She is also a lawyer.

She is expected to bring her experience in achieving the government’s manifesto of tackling climate change.

FEARS AND PROSPECTS OF A PETRO’S PRESIDENCY

Right-wing politicians have criticized the newly elected president for his proposed reforms. They believe the policies will be harsh on the economy, especially the proposed stoppage of further oil exploration. Others are worried that Petro has dictatorial traits which might turn him into a dictator. He has been accused of disregarding his advisers in the past. They fear that he might show that on a larger scale as president.

Although the international community and the Columbian oligarchs are not comfortable with Petro’s emergence, the hopes of the poor masses are high as they look forward to a government that will work in their favor. Either way, Columbia should brace up for massive changes.