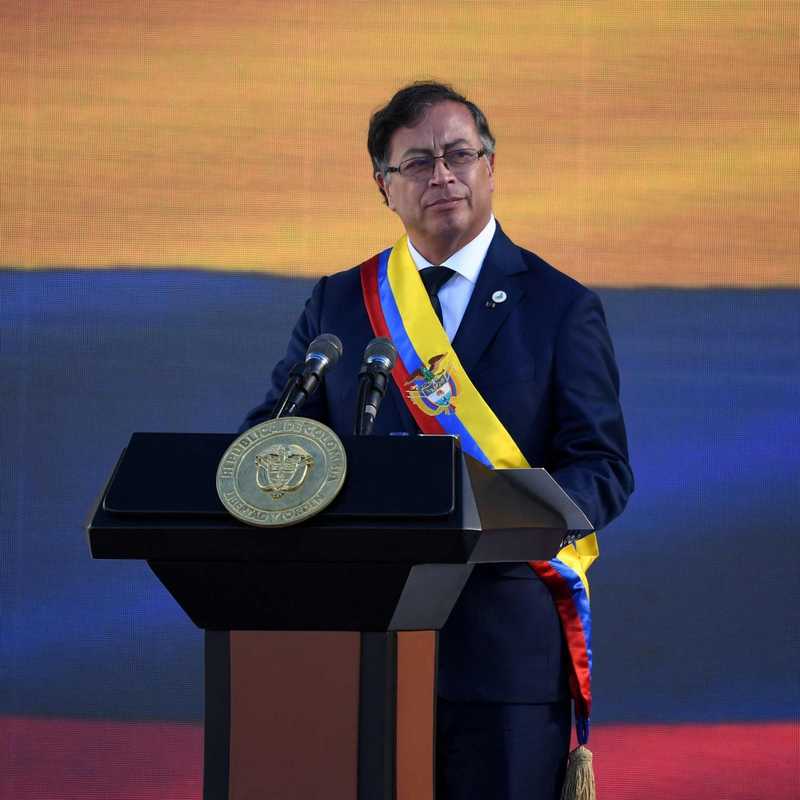 Every time a president is elected and sworn in in Columbia, a new record emerges. The last time, the country got its youngest leader in history. Again, another president has been sworn in, and another record broken. It was the first time in Columbia that a leftist and former rebel became president.

Gustavo Petro, 62, was elected President after scoring the highest votes in a Columbian election to defeat billionaire businessman Hernandez Suarez.

It was also the first time an Afro-Colombian woman was elected Vice President. Francia Marquez is an environmental activist and a former housekeeper.

“I swear to God and promise the people that I will faithfully enforce the constitution and the laws of Colombia,” said Petro while taking his oath.

His first message to Columbians after swearing in was that of unity. In an emotional inaugural speech, Petro said he does not want a divided Columbia but a united country.

“I do not want two countries, just as I do not want two societies. I want a strong, just, and united Colombia,” the new President said. “The challenges and tests that we have as a nation demand a period of unity and basic consensus.”

The new President also called on armed groups to drop their weapons permanently and accept peace.

“We call on all those who are armed to leave their arms in the haze of the past. To accept legal benefits in exchange for peace, in exchange for the definitive non-repetition of violence,” Petro, a former rebel, added during his inaugural speech.

The former rebel has promised to negotiate with the National Liberation Army (ELN) armed group to foster lasting peace.

There are at least 90 armed groups with over 10,000 active members in Columbia, and the effort to negotiate with all of these would not be an easy task for the government. Petro’s remarks suggest some amnesty for armed men or groups that surrenders their arms.

A FAILED WAR ON DRUG TRAFFICKING

Columbia is located in the part of the world where drug trafficking is an order of the day. It is the world’s biggest producer of cocaine. Despite the death of tens of thousands, it appears that very little has been achieved by the United States and other countries fighting the drug pandemic.

In his inaugural speech, Petro called for a reform in the fight against drug trafficking, saying the US-led war had failed.

“It is time for a new international convention that accepts that the war on drugs has failed, that it has left a million dead Latin Americans during 40 years, and that it leaves 70,000 North Americans dead by overdose each year. The war on drugs strengthened mafias and weakened states,” Petro said.

Petro, in his campaign, promised to raise the taxes of the wealthiest Columbians for equitable distribution of wealth. This promise no doubt appealed to the poor populace, who, in turn, voted for him.

While the wealthy have very little expectations from Petro, the poverty-stricken people of Columbia have much to expect from him.

The celebrations did not end in Columbia. There were also celebrations in neighboring Venezuela, as the new president had promised the reopening of trade between the two countries.

56-year-old plumber Nelson Molina, a supporter of Petro, said: “I didn’t believe I would live to see this finally happen. I know we won’t change from one day to the next, this is just the beginning.”

In his campaign, Petro said he would not issue new licenses for oil exploration, even though the oil industry is responsible for 50% of the country’s export. His government will focus on generating more revenue from taxes, with an additional $10 billion to be generated yearly after the tax reforms.

Petro also promised citizens free public university education and healthcare changes. However, his priority is to fight hunger and poverty as almost half of the population is living below the poverty line.

The citizens are not doubtful of their president’s zeal to solve their problems. However, the promises and reforms promised by the new president have raised the question of whether he can handle the multiple challenges as promised.

Yan Basset, a political scientist at Rosario University, thinks his plans are too numerous, and he might go nowhere.

“He’s got a very ambitious agenda. But he will have to prioritize. The risk Petro faces are that he goes after too many reforms,” Basset said.

Many Columbians will agree with Yan Basset, but the vast majority of the poor people are hoping that Petro’s government will be one that changes their status and make their life better.

Petro has selected some cabinet members, including renowned professor Jose Antonio Ocampo as finance minister. The new minister of labour is Jaime Caycedo, the head of the Columbian communist party.