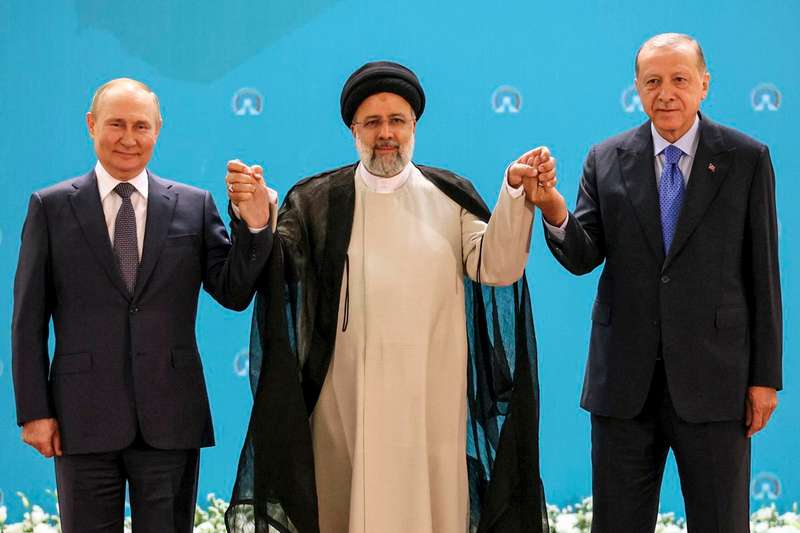 On Tuesday, President Putin left Russia for the second time since the war in Ukraine started. It was the first time the Russian leader would visit any country outside the former USSR since the fight began.

Receiving the Russian President, Ebrahim Raisi, the Iranian President thanked Biden for accepting the country’s invitation. He also said the two countries are interested in improving the relationship that exists between them.

“After our visit and the meeting in Moscow and then in Ashgabat, everything has been developing very quickly, including our bilateral relations. Both sides have the political will needed to develop our ties and put them into practice,” President Ebrahim Raisi told Putin.

He added that efforts by the two countries have made the region safer and that, unlike other countries claiming to fight terrorism, both countries have proven that they can defend themselves.

“We have good, substantial experience on the Syrian track. I think this experience and our cooperation have made this region safer. Other countries merely claim to be fighting terrorism. Meanwhile, our relations and cooperation in counterterrorism have proved our ability to reach the goals we set for ourselves,” Rais added.

Reacting to President Raisi’s remarks, President Putin thanked the leader for his country’s hospitality and promised to boost trade with the Islamic Country.

“I am very pleased to be on the hospitable Iranian soil…We can boast about record figures in terms of trade growth,” President Putin told President Raisi.

“We are strengthening our cooperation on international security issues, making a significant contribution to the settlement of the Syrian conflict,” he added.

President Putin also visited the Supreme Leader of Iran, Ali Khamenei. The leader described NATO as a dangerous entity that does not recognize its limits.

“NATO is a dangerous entity. The West is totally opposed to a strong, independent Russia. If the way is opened for NATO, it will recognize no limits,” Khamenei said. “If it hadn’t been stopped in Ukraine, it would have later started a similar war in Crimea.”

The meeting came after an American intelligence report showed that Russia was trying to purchase drones from Iran. National Security Adviser, Jake Sullivan, disclosed this.

“Information indicates that the Iranian government is preparing to provide Russia with up to several hundred (aerial vehicles), including weapons-capable UAVs on an expedited timeline,” Sullivan told reporters on Monday.

“Our information further indicates that Iran is preparing to train Russian forces to use these UAVs, with initial training session slated in as soon as early July. It’s unclear whether Iran has delivered any of these UAVs to Russia already,” he added.

President Putin’s visit to the area has further confirmed this speculation, and one thing of concern to NATO is Turkiye’s involvement in the alliance.

Although Erdogan’s country, Turkiye, is part of NATO, there seems to be a solid relationship between the President and Russia. During President Putin’s visit to Iran, he also met with the Turkiye President and thanked him for the role he played in mediating talks between Russia and Ukraine.

“With your mediation, we have moved forward. Not all issues, however, have been resolved. But what was is already good,” Putin told Erdogan concerning grain exports from Ukraine.

“It’s a great advantage that we are able to do so,” Erdogan said, adding that in the context of Turkey’s role as a mediator, he is sure that “Russia’s approach continues to be positive.”

Erdogan did not withhold from commenting on Finland and Sweden’s membership in NATO. After a cabinet meeting on Tuesday, the Turkiye president said he would not refrain from blocking their membership if necessary.

“I would like to remind you once again that we will freeze the process if they do not take the necessary steps to fulfill our conditions,” Erdogan said.

Although the three leaders of Russia, Iran, and Turkiye are relatively close, they have very little in common. The unifying factor between them is likely a combined dislike for the U.S and its allies.

Iran has now warned the Turkish leader of launching a military operation in Syria against the Kurdish fighters that the Turkish government regards as terrorists.

“A military attack in the north of Syria would be to the detriment of Turkey and benefit terrorists,” Khamenei told Erdogan.

The supreme leader warned that any attempt to launch a military operation would not yield the expected result.

“This move would definitely harm Syria, Turkey, and the region, and it will not create the expected political action by the Syrians,” Khamenei said. “The Syrian issue should be resolved through negotiations and Iran, Turkey, Syria and Russia will carry out discussions on this issue.”

There is already an indication that Russia is not ready to stop the war in Ukraine anytime soon, and an alliance with countries of like minds would help achieve that. No doubt, there is more to Putin’s visit to the West Asian country.