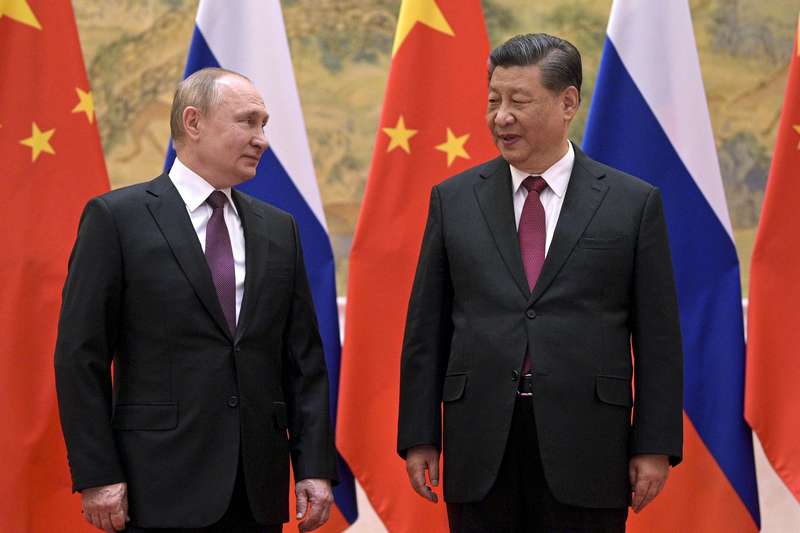 Leaders of Russia and China, the mutual enemies of the United States and the West, met on Thursday as the Kremlin struggles to keep up the fight in Ukraine. President Xi Jinping and Vladimir Putin met in Uzbekistan on Thursday for the first time since Russia invaded Ukraine.

The Russian leader thanked his Chinese counterpart for his balanced position on the war in Ukraine and promised to address his worries about the invasion.

“We highly appreciate the well-balanced position of our Chinese friends in connection with the Ukrainian crisis,” Putin said told Xi on Thursday.

“We understand your questions and your concerns in this regard, and we certainly will offer a detailed explanation of our stand on this issue during today’s meeting, even though we already talked about it earlier,” he added.

Putin also condemned the role of the United States in Taiwan, which he described as a “provocation.”

“We condemn the provocations of the U.S. and its satellites in the Taiwan Strait,” Putin continued: “We jointly stand for forming a just, democratic and multipolar world based on international law and the central role of the United Nations, not rules invented by some who try to enforce them on others without explaining what they are.”

China is one of those nations that have managed to refrain from condemning the invasion of Ukraine despite pressures from the West. There are also indications that China might provide military support to Russia, especially as the war is not yielding any results for the Russians. However, Putin’s statement suggested that president Xi has worries about the situation, which needs clarification before he can offer his full support.

President Xi to work with Russia, but not militarily yet

On his part, President Xi said China would “work with Russia to extend strong mutual support on issues concerning each other’s core interests.” He also promised that Beijing would “play a leading role in injecting stability and positive energy into a world of change and disorder,” according to a statement released by the Chinese Ministry of Foreign Affairs on Thursday.

Unlike Putin, President Xi’s choice of words were more subtle than those of his ally.

Experts believe that the more Russia is struggling to evade sanctions imposed by the West, China could be the only friend that helps to save the situation.

President Putin had earlier said he was “convinced that by the end of the year [China and Russia] will reach new record levels, and in the near future, as agreed, we will increase our annual trade turnover to $200 billion or more.”

At the moment, military support from China is still invisible, but the Kremlin cannot do without China at this point, whether it decides to help militarily or not. It is the biggest buyer of its energy after a complicated trade with Europe.

Xi added that he appreciated “Russia’s adherence to the one-China principle and stressed that Taiwan is a part of China” and said no country in the world has the right to interfere in the issue with Taiwan.

“China did not give Russia what it wanted”

There is no doubt that China has become Russia’s major trade partner and a close ally in the past months and years. However, it is difficult to determine if the outcome of the Thursday meeting was a positive one.

Some experts believe that Russia failed to get the needed support from China, as Beijing had become more cautious lately.

“China did not give Russia what it wanted,” Wan Qingsong, an associate research professor at East China Normal University’s Centre for Russian Studies, said.

“China will no doubt grow even more cautious after Moscow suffered severe setbacks in Ukraine and by no means wants to get entangled, directly or indirectly, in the protracted conflict,” he said. “That’s why the meeting is unlikely to yield substantive results,” he added.

President Xi’s choices of words at the meeting also suggested a leader trying to remain at the breakeven point.

While China is yet to provide military support to Russia, other analysts believe it will have a choice to make if things continue the way they are currently in Ukraine. However, the most likely option for Beijing will be to support Russia rather than the US and its allies.

“If Ukraine continues in its current momentum, China will be on the horns of a dilemma: actively support Russia or risk the huge strategic implications of its defeat,” Gal Luft, co-director of the Washington-based Institute for the Analysis of Global Security, said after the meeting.

“Russia is still holding well, but if things turn bad for it, China will ultimately move out of its comfort zone and support it in a meaningful way. China will never accept Nato proxies on its border,” he added.