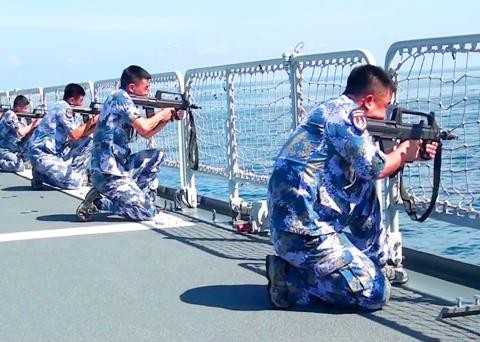 There is no sign that Taiwan will stop paying for Pelosi’s visit soon. After five days of the visit by the speaker of Congress, China has refused to slow down its military drill around the Island country. China has extended the military exercise, and the government of Taiwan is scared that Beijing could be simulating an invasion of the country.

China’s Ministry of National Defense spokesperson, Wu Qian, blamed the United States for the “strain in the Taiwan Strait.”

“China is the victim of political provocation from the US. The actions taken by the Chinese government to safeguard state sovereignty and territorial integrity and curb the separatist activities are legitimate and justified,” Wu said in a statement released by the country’s embassy.

“The US is deliberately creating a crisis, and at the same time making an excuse to shift blame to others, which China firmly opposes. We urge the US to respect China’s core interests and concerns, abandon to use the island of Taiwan to counter China,” Wu continued.

The drills were expected to end on Sunday at noon, but unfortunately, the PLA extended the operations.

“The Chinese People’s Liberation Army continued to carry out practical joint exercises and training in the sea and airspace around Taiwan island, focusing on organizing joint anti-submarine and sea assault operations,” the eastern command of the Chinese military said in a statement on Monday.

SIMULATION OF AN INVASION

Although the Chinese foreign ministry described the drills as “normal military exercises,” there are signs they could be more than that. There are possibilities that China is only practicing how to take over Taiwan when the time finally comes.

Even though China has not openly acknowledged that the ultimate goal is to take over Taiwan, the Chinese state broadcaster CCTV said the country was “testing the capabilities” of its military.

There have been talks that China was preparing its military to take over the Island country in the near future. The Chinese Communist party sees the Island as part of it, and both countries would merge either through diplomacy or through a war. Either way, what matters to the communist party is that Taiwan doesn’t remain as Taiwan. Maybe Pelosi just triggered a fight that would still come anyway.

TAIWAN READY TO DEFEND THE ISLAND

Despite the plenty of talks surrounding the drills in Taiwan, the Island country has kept calm and has only done all it could to ward off the Chinese military jets and ships. The country’s President, Tsai Ing-wen, last week said the pursuit of peace would not prevent Taiwan from defending itself.

“Peace is most important. Never resort to provocations that increase tension. However, I am determined and confident to defend my country if necessary,” the President said.

In a statement released by Taiwan’s foreign ministry, it condemned China’s claim that the Island is part of it and that Beijing was only creating more crises with that claim.

“In the face of military intimidation created by China, Taiwan will not be afraid nor back down and will more firmly defend its sovereignty, national security, and free and democratic way of life,” the ministry said.

Premier of Taiwan, Su Tseng-chang, also condemned China’s military actions along the borders of the country. He described the drills as “arrogant military operations.”

“Not only Taiwan but other countries in the region, as well as freedom-loving countries like the US and so on, have vehemently protested and condemned China’s arrogant military operations disrupting regional peace and stability,” he said during a pressing engagement.

At this point, nobody should be more worried than the leaders of the United States because Pelosi’s visit was responsible for the military operations. However, President Biden has said although he is concerned, he was not worried about the situation.

“I’m not worried, but I’m concerned they are moving as much as they are. But I don’t think they are going to do anything more than they are,” Biden told reporters on his first visit outside the White House after testing negative for Covid-19.

THE FEAR OF MISCALCULATIONS

For now, the Chinese Military drills are going on as planned. However, there are fears of miscalculations that could lead to a full-blown escalation.

“We condemn these actions, we have, we’ve been condemning them since they started escalating and we’ve also said we anticipated China might take this step,” Jean-Pierre told newsmen. Already, the Taiwanese government has confirmed that Chinese planes crossed the artificial boundaries between the countries. Actions like that if not properly handled, will likely lead to escalations. Hopefully, matters will not get worse to that extent before China finally withdraw its sword from Taiwan.