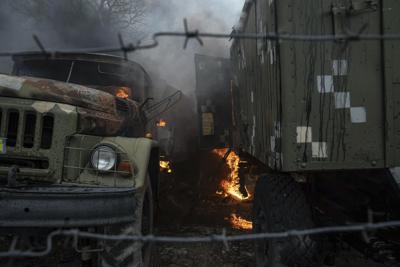 As Ukraine was celebrating its 31st independence anniversary on Wednesday, there were fears that Russia would mark the celebration with bombardments. Before the end of the day, the fears were realized as a Russian missile attack killed 22 people and set a train carrying passengers on fire.

The speaker of Parliament, Ruslan Stefanchuk, first made the revelation on Twitter, saying 15 people died, including an 11-year-old child.

“Just recently, 15 people, including an 11-year-old child, were killed during a rocket attack on the Chaplyne railway station. About 50 more were wounded,” Ruslan said.

“Chaplyne is our pain today. As of this moment, there are *22 dead, five of them burned in the car, a teenager died, he was 11 years old, a Russian rocket destroyed his house. Search and rescue operations at the railway station continue. We will definitely make the occupiers answer for everything they have done. And we will certainly throw out the invaders from our land,” Zelensky said.

The 44-year-old said the rockets hit a train in Chaplyne, a town not too far from Donetsk in Eastern Ukraine, adding that four carriages were on fire.

On Tuesday, Zelensky warned residents to stay indoors for fears that Russia could attack as Ukraine is celebrating its independence.

Secretary of State, Anthony Blinken condemned Russia’s actions and called on nations to stand with Ukraine.

“Russia’s missile strike on a train station full of civilians in Ukraine fits a pattern of atrocities. We will continue, together with partners from around the world, to stand with Ukraine and seek accountability for Russian officials,” Blinken said on Twitter.

On Wednesday, it completed six months since Russia invaded Ukraine. It coincided with the Country’s 31st independence celebrations.