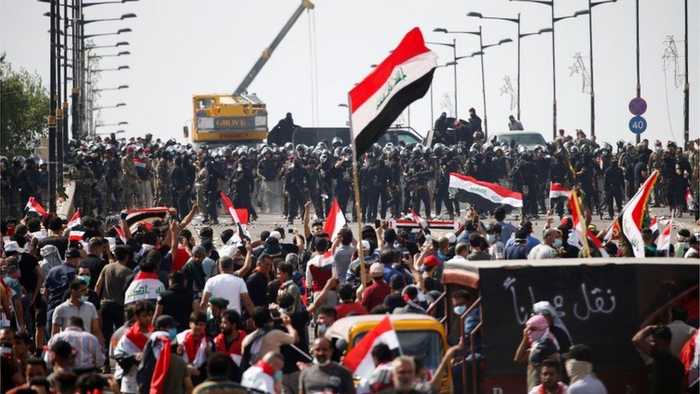 Barely one month after a massive protest in Sri Lanka, another protest had started in Iraq. This time, it is not a peaceful one. According to reports, at least 30 people had been confirmed dead and more than 70 injured in Bagdad, the capital of Iraq.

The protest followed the announcement by powerful Iraqi leader Muqtada al-Sadr that he was resigning from politics.

“I hereby announce my final withdrawal,” Sadr said in a statement posted on Twitter on Monday.

Supporters of the powerful Islamic cleric stormed the country’s Green Zone on Monday in protest, leading to a gun battle between the Sadr’s backed forces and Iraqi Security forces. Pictures from the scene of the protest show protesters taking over the government building, including the government’s palace. The Iraqi security forces said the Sadr’s backed forces had fired multiple rockets inside the Green Zone, which also houses embassies of different western countries.

Iraqi security forces on Monday asked protesters to withdraw from the Green Zone, adding that the military was practicing “the highest levels of self-restraint and brotherly behaviour to prevent clashes or the spilling of Iraqi blood.”

A curfew was declared in Baghdad beginning from 7 pm local time in a bid to halt the protest. As of Tuesday morning, the Iraqi forces said they had removed every protester from the presidential palace and

The man whose decision triggered the protest has called for peace and urged protesters to leave the Green Zone. Earlier, his supporters said he was observing a hunger strike until the violence ends in the country’s capital.

“The party is disciplined and obedient, and I was my hands of those who do not withdraw from parliament building within an hour,” Sadr said in a televised statement.

Sadr thanked the security forces for taking a neutral stand during the protest and apologized for the casualties recorded.

“I thank the security forces that took a neutral stance with all parties,” he said.

Analysts believe that his resignation was one of his political games and that he couldn’t resign from politics at this time. Other commentators believe that it was his method for not being held responsible for the consequences of the deadly protest.

Prime Minister, Mustafa Al-Kadhimi, said Sadr’s speech was an act of patriotism and respect for the people of Iraq.

“His Eminence Muqtada Al-Sadr’s call to stop violence is the epitome of patriotism and respect to the sanctity of Iraqi blood,” Mustafa said on Twitter.

“His speech emplaces national and moral duty upon all to protect Iraq and stop political escalation and violence and, to immediately engage in dialogue,” he added.

The UN assistance mission for Iraq also thanked the revered Islamic cleric for his statement that has brought relative calmness to the country.

“UNAMI welcomes the most recent moderate declaration by Sayed Muqtada al-Sadr. As stated yesterday: restraint and calm are necessary for reason to prevail,” the statement reads.

Calm is gradually returning to Baghdad after the violent protests which have given hope to citizens that peace could be on its way. Others think the calm is only temporary and that a civil war is imminent.

Effects of the Protest

Soon after the protest started in Baghdad, Iraq’s neighbor Iran closed its land borders and halted flights to and from Iraq.

Kuwait went a step further to urge its citizens to leave Iraq immediately and urged citizens planning to travel to the country to have a rethink.

Emirates Airlines also announced that it has suspended its flight to Iraq pending the suspension of the curfew.

The World calls for Peace

Many nations have expressed great concern over the situation in Iraq. As of Tuesday morning, several countries have sent messages of peace to the Asian country, calling for both parties to come to the negotiation table.

Canadian envoy, Gregory Galligan, said the situation was very dangerous and called on both parties to resolve their differences through negotiations.

“Deeply alarmed by clashes across [Iraq] this evening. The situation is very dangerous and could quickly spiral beyond control. Canada urges all parties to take steps to quickly de-escalate the situation and to resolve differences through negotiation for the benefit of all Iraqis. Gregory Galligan said on Twitter.

“The United States is concerned about escalating tensions and urges all parties to remain peaceful and refrain from acts that could lead to a cycle of violence. Iraq’s security, stability, and sovereignty should not be put at risk. Now is the time for dialogue to resolve differences, not through confrontation,” Ambassador Alina Romanowski said in a statement.

“The right to peaceful public protest is a fundamental element of all democracies, but demonstrators must also respect the institutions and property of the Iraqi government, which belong to and serve the Iraqi people and should be allowed to function,” she added.

The EU also called on both parties to “exercise utmost restraint and remain calm,” adding that it was important to avoid further conflict.

“All parties should work towards de-escalating tensions and engage in political dialogue within the constitutional framework, as the only means to resolve differences.

The European Union reiterates its unwavering support to Iraq’s security, stability and sovereignty,” the EU said in a statement.

The French Government said it was gravely concerned about the situation in Baghdad.

“France asks the parties to show the utmost restraint, to act responsibly and immediately stop the deadly clashes,” the statement said.