Stampede kills four at the venue of the Arabian Gulf Cup final in Iraq, dozens injured 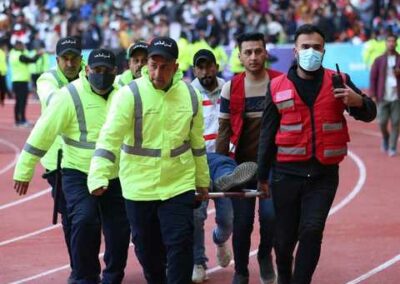 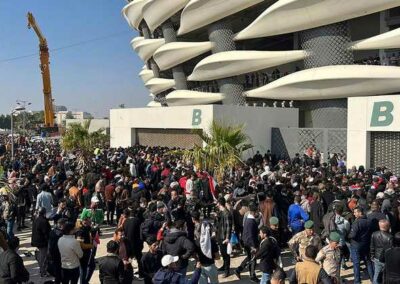 The Arabian Gulf Cup final has ended with Iraq defeating Oman by 3-1. While Iraqis should be celebrating the victory, they are mourning the death of at least four people who died in a stampede before the commencement of the match.

According to Iraqi football officials, four football fans died outside the stadium in a stampede when trying to find their way inside. The incident happened in Basra, Southern Iraq. Thousands of fans were already at the stadium in the morning, but the gates were closed, as most of them were without tickets. Others with tickets discovered they were fake at the last minute. At least 80 people are said to have sustained injuries, with many in critical condition.

Sajjad Ahmed, another supporter that travelled from Southern Iraq, told Al Jazeera that he regretted attending the match because of the situation.

“We reached the gates at 8 am,” she said. “The situation was [difficult] due to the amount of fans wanting to enter the stadium. The gates were closed at about 12:30.”

“If I had known that this would happen, I would not have come,” she added.

Pictures shared on social media showed football fans struggling to find their way into the stadium, even if it means not going in through the gate. The director of media and public relations at the ministry of interior, Major General Saad Maan, urged the fans to return home unless they had tickets for the match.

“The numbers of fans are very large, and we do not want there to be cases of suffocation,” Major General Saad said in a statement.

The stampede couldn’t stop the match

When the stampede was reported, many thought the match between Iraq and Oman would not go on. However, the Iraqi Football Association was quick to release a statement that the final would be played as planned.

“The match between the Iraqi and Omani national teams will take place as scheduled. We call on honourable fans to refrain from coming to the match stadium because the stands are completely full,” the Iraqi FA statement reads. On Thursday night, the competition ended with Iraq winning the trophy after a 3-1 win over Oman in a heated encounter.

To appease the supporters that have travelled from different parts of the country, the authorities had to set up large screens in different locations to enable them to watch the match outdoors. The eight-nation tournament started on January 6, with Qatar, Saudi Arabia, the UAE, Yemen, Iraq, Kuwait, and Oman participating.

Why so many people?

Because of the sanctions on Iraq, it had not hosted any major football competition since 1979, when it last hosted the Arabia Gulf Cup. Hosting such a tournament at this time was a unique opportunity for football fans and the government. For many, it was the first time they would have the opportunity to see a major final in their country. It was a once-in-lifetime thing. Since the competition began on January 6, the crowds in stadiums have been unprecedented, especially during matches involving Iraq. 5 hours before the 7 pm kick-off, the stadium was already filled to capacity.

As Iraq had qualified for the final, everyone wanted to see what happens inside the stadium. Unfortunately, the stadium’s capacity was below the crowd, hence there were no tickets for everyone. Others purchased fake tickets. Some fans travelled over 500 miles to the venue of the final match, only to see it on the screen. But at least, they were grateful to have seen it because not everyone was alive to witness Iraq lift the trophy.