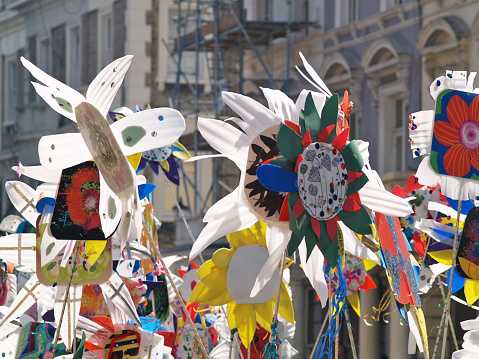 The Notting Hill Carnival returned to the London streets this weekend after an absence of three years due to the Covid situation in 2020 and 2021; but the undeniable joy of the occasion has been marred by incidents of violence, sadly which included the death of a 21 year old man, fatally stabbed on Monday evening.

Police named the victim as Takayo Nembhard, a rapper from Bristol, who was attacked in the Ladbroke Grove area, underneath a flyover at around 8pm. They reported that their officers had pulled the man out of a huge crowd and had administered emergency first aid until paramedics from the London Ambulance Service had arrived. He later died from his wound in a West London hospital, and now the Metropolitan Police have begun a murder investigation, stating that there should be plenty of witnesses, as there were literally hundreds of people in the immediate vicinity at the time of the attack and have appealed for anybody with information to come forward straight away, even though they may have reservations about doing so for fear of reprisals.

Dr Alison Heydari, the commander of local policing, said officers had been “working tirelessly” ahead of the festival to ensure it was a safe environment for those who attended, and said by and large it was a success. “The atmosphere over the past two days has been largely positive and good natured, as a Carnival should be. Regrettably however, on Monday evening we saw a number of violent incidents and a 21-year-old man has tragically lost his life.”

Continuing, she went on to express condolences and confirm that the victim’s next of kin have been informed and are being supported by specialist officers from the Met. “Our thoughts are with his family as they come to terms with their terrible loss. There were hundreds of people in the immediate vicinity when this incident took place. I would urge anyone who saw anything, who has video footage, or who has any other information that could assist officers, to please come forward.” She said homicide detectives would pursue every possible line of inquiry to identify those responsible and bring them to justice.

Tribute to the victim

Mr Nembhard, was known as TKorStretch, and his manager, Chris Patrick paid tribute to him, he said: “This is the worst possible ending for a talented kid. He went there with his sister and friends. He had nearly 11,000 monthly listeners on Spotify, with one of his songs having more than 300,000 streams and his YouTube videos have been viewed more than a million times.”

He added: “He played for Bristol Rovers in his youth but turned to drill music after injuring his right leg. His talent was endless and I can tell you guys he was close to greatness.” He went on to say: “My deepest condolences to TK’s Mother & Father, his Brother, 2 Sisters, Girlfriend and his child that will never meet his father. TK was a good kid, a good guy and what has happened breaks my heart… Rest in peace my Friend.”

Nearly one million people were thought to have been in attendance on Monday for what has become known as “Adults Day”. The extravagant costumes and booming sound systems meant that the August Bank Holiday spectacle lived up to its billing as the second-biggest carnival in the world, trailing only behind the Rio de Janeiro version.

With so many people on the streets it was probably inevitable that there would be incidents of unrest and criminal activities. Police said that as of the early hours of Tuesday 30 August, there had been a total of 209 arrests made since the start of Carnival, for a mixture of incidents including: 36 for possession of drugs, 46 for assault, 33 for possessing an offensive weapon, 8 sexual assaults and 27 public order offences. The force also reported that there had been several other stabbings, although none were thought to be life-threatening.

They confirmed that as many as 34 Metropolitan Police officers had been assaulted, some requiring hospital treatment. “The event aims to promote unity and bring people of all ages together, but every year our brave officers come under attack at this event. Colleagues dread policing it. And yet nothing changes.” was a tweet released early on Tuesday 30 August. It could bring about an official look into how the event might need to be structured differently in future, but it is unlikely.

There was additional sadness in the force as they paid tribute to one of its most experienced and “affectionate” horses that died after collapsing while on duty at the carnival on Sunday. Police Horse Sandown, a 14-year-old chestnut gelding, had policed “all types of events” across London during his seven years of service, since being presented to the force in 2015. A spokesperson said it was too early to determine the cause of death, and an investigation would follow.

Birth on the streets

There was also a birth at the carnival, although it is not actually known if the mother was a local resident, or just someone visiting the spectacle. A London Ambulance spokesperson said it was called at 18:45 to reports of “a person in labour within the footprint of Notting Hill Carnival. We treated an adult and baby at the scene and took them to hospital as a priority.”

There were 72 seconds of silence on Monday afternoon to remember those killed in the shocking fire at nearby Grenfell Tower, one of several gestures held over the weekend to mark that tragedy.

Questions to be answered

There can be no doubt that Europe’s largest carnival, the Notting Hill street party is alive and well. Sadly though that is not the case for all those who attended the event, and for family and friends of Takayo Nembhard there will be some searching question aimed at organisers and authorities.