Rai Benjamin appointed the latest Ambassador to Antigua and Barbuda 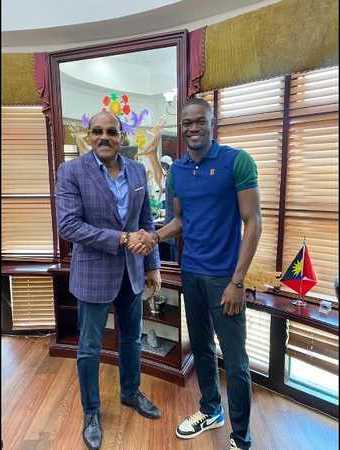 The Antigua and Barbuda government has made Rai Benjamin a cultural and sporting ambassador to the country and to be a strong advocate for other Antigua and Barbuda athletes seeking opportunities abroad. That decision was made by Prime Minister Gaston Browne.

Rai is the son of outstanding cricketer Winston Benjamin–who was a silver medalist in the last Olympics and the World Championships. Rai was invited to Cabinet by PM Browne Wednesday. He was accompanied by his family.

“Rai Benjamin confirmed that he was more than happy to play those roles and provided the Cabinet members a list of deficiencies that would have to be cured if the Antigua and Barbuda athletes were to be able to make it to the very top. They included an increased number of coaches, additional tracks that meet the same standard as YASCO, and more track meets, both regional and international. The Cabinet proposed more intense Parish-based clubs to foster greater competition. ” Chief of Staff in the PM’s Office said on Thursday

Hurst says the Cabinet also invited one of Rai’s coaching experts from the United States to attend its meeting and to consider him for turning out more successful athletes.

“The international coaching expert believes that the best coaching begins at childhood and continues through adulthood. In fact, coaches can gain certification and can also find places in the United States and elsewhere, once they are recognized as having high achievement results,” Hurst said.

Meanwhile, the Minister of Sports confirmed that proper training and exposure will bring global attention to Antigua and Barbuda, once the investment is made at an athlete’s early age; Antigua and Barbuda is at that stage at this moment.

“The Sports Minister and the Minister of Foreign Affairs are scheduled to meet with the Antigua and Barbuda coaches to develop a program to identify talent at an early age and to upgrade our talent,” Hurst added.

Although he competed on the USA’s team, Rai Benjamin was socialized, and schooled in Antigua; he is a graduate of the Antigua Grammar School before migrating to the USA.