Tension rises as Armenia and Azerbaijan engage in a fresh clash 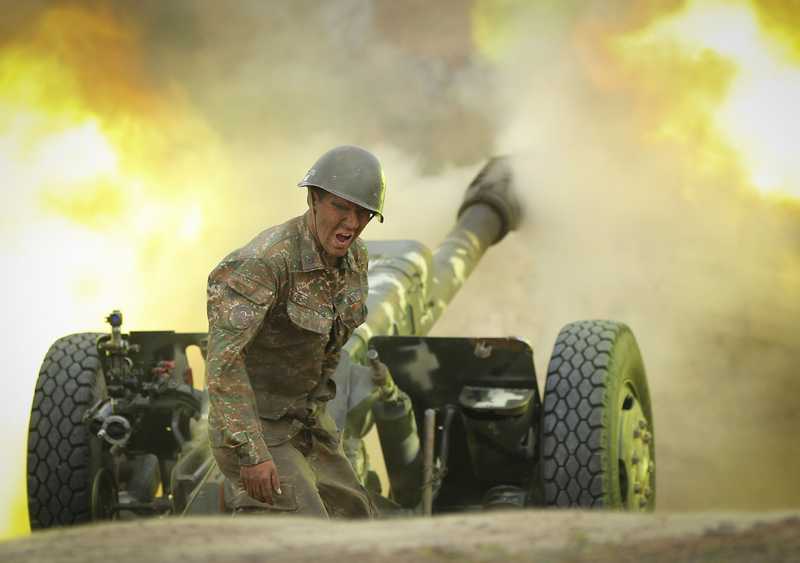 While the Russian forces are suffering losses in Ukraine, its neighbor, Azerbaijan, resumed fighting on Monday night with Armenia. The fight, a resumption of years of hostilities between the two nations, has raised concerns among neighbors, including the Kremlin. Both sides said they had lost soldiers in the clast.

“Several positions, shelters and reinforced points of the Azerbaijan armed forces … came under intense shelling from weapons of various calibres, including mortars, by units of the Armenian army,” a Russian news agency quoted a statement by Azerbaijan’s Defence Ministry.

“As a result, there are losses in personnel and damage to military infrastructure,” the statement added.

The president of Azerbaijan, Ilham Aliyev, said the country’s armed forces prevented the provocations of the Armenian soldiers on the border of the two countries.

“The provocations committed by the Armenian armed forces on the border of the two states were prevented, and all relevant duties and tasks were fulfilled,” Ilham Aliyev said in a statement.

“The Armed Forces of the Republic of Azerbaijan controls the operational situation along the border,” the statement added.

On its part, the Armenian government said Azerbaijan started the provocations, and its action was in response to the attacks.

“Intensive shooting is continuing – started as a result of a large-scale provocation by the Azerbaijani side. Armenia’s armed forces have launched a proportionate response,” Armenia’s Defence Ministry said on Tuesday.

Armenia’s deputy foreign minister, Vahe Gevorgyan, told Aljazeera that Azerbaijan attacked Armenian military installations in a “large-scale military offensive” initiated not just on the border of Armenia but also “inside of the territory of Armenia.”

“Armenia has always been interested in building security across the border with Azerbaijan, and on a number of occasions Armenia has proposed working together to de-escalate the situation there and undertake security and confidence-building measures,” Vahe continued: “But what Azerbaijan is doing is exactly the opposite.”

The prime minister of Armenia said 49 of its soldiers died in the clash and blamed Azerbaijan for attacking towns, including Jermuk, Goris, and Kapan. He added that Baku attacked the towns because it did not want to negotiate the status of Nagorno-Karabakh, an enclave in Azerbaijan but populated with Armenians.

At the moment, Antigua news has not independently verified the claims by both sides on who initiated the attacks. Meanwhile, the situation is calming down, but there are fears that the hostilities could begin at any time.

Despite fighting a war that many consider unnecessary for the past seven months, Russia was called upon to broker a peace deal between Armenia and Azerbaijan after the overnight shootings. In a statement released by the country’s foreign ministry, the Kremlin said it is in talks with the two sides, and a peace agreement has been reached.

“We call on the parties to refrain from further escalation of the situation, exercise restraint, and strictly observe the ceasefire,” the Russian foreign ministry said on Tuesday.

“We are in close contact with Baku and Yerevan. An appeal was received from the Armenian leadership to assist in resolving the situation,” the statement continued. “We expect that the agreement reached as a result of Russian mediation on a ceasefire from 9.00 am Moscow time on September 13 will be carried out in full.”

In 1997, Armenia entered a treaty of friendship with Russia. Under this deal, the Kremlin is expected to provide military support to Yerevan should it be attacked by a foreign country. After the attack, Armenia called on Russia to implement the treaty, but it decided to take the bold step of resolving the situation as it did in 2020.

The escalation between Azerbaijan and Armenia has drawn the attention of many countries, including the United States. US secretary of state Anthony Blinken said the United States is aware of the situation and called for an immediate non-military solution to the conflict.

“The United States is deeply concerned about reports of attacks along the Armenia-Azerbaijan border, including reported strikes against settlements and civilian infrastructure inside Armenia.  As we have long made clear, there can be no military solution to the conflict.  We urge an end to any military hostilities immediately,” Blinken said in a statement.

Josep Borrell, the European Union’s foreign policy chief, said: “It is imperative that the hostilities stop and that there is a return to the negotiating table. All forces should return to positions held prior to this escalation, and the ceasefire should be fully respected.”

He added that EU officials have been sent to the region “to support the necessary de-escalation and to discuss next steps in the Brussels dialogue process between the Armenian and Azerbaijani leaders.”

The unending crisis between Armenia and Azerbaijan

Over 6,500 people died in a one and half month of conflict in 2020. At the end of the fight, Azerbaijan regained a large territory in and around the enclave.

The Russian government managed to broker peace between the two sides after it sent almost 2,000 peacekeepers to the enclave. Since then, both sides have always accused each other of breaching the agreement.

The latest fight on Monday and Tuesday is the strongest since the 2020 six-week war.