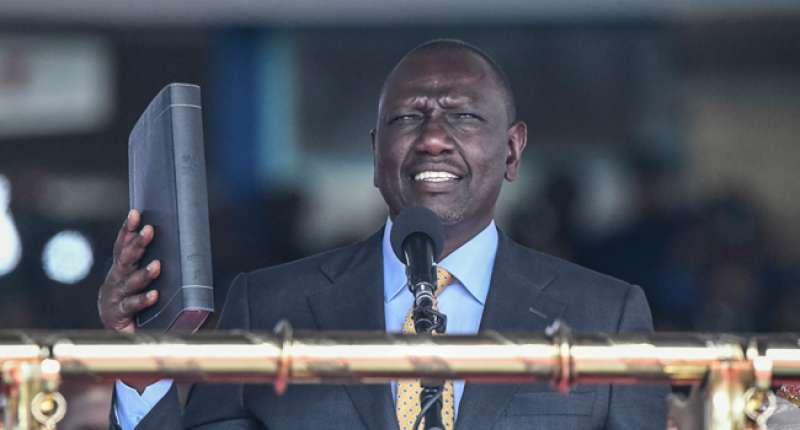 Despite tight security on Tuesday, supporters of William Ruto forced their way into the Kasarani International Stadium, Nairobi, to witness his inauguration as non of them wanted to miss the swearing-in ceremony of Kenya’s fifth President. Ruto, 55, won the country’s controversial Presidential elections last month after winning 50.5% of the total votes, and his closest rival, Raila Odinga, scored 48.5% of the votes.

As the tradition is, Ruto held a Bible in his hand and took the oath, promising to preserve and protect the country’s constitution. He attributed his emergence as President to God.

“This is the day the LORD has made; let us rejoice and be glad in it,” Ruto, a prominent churchgoer, quoted from the Bible in his first tweet after his inauguration.

“Standing here today is testimony that there is God in heaven. I want to thank God because a village boy has become the president of Kenya,” Mr. Ruto said in his inaugural speech.

In his speech, Ruto said his priority was to create 800,000 jobs for the people of Kenya each year and to create a business-friendly environment for them.

“Jobs are our other priority. It is time for us to stem the tide of youth unemployment. Every year, 800,000 young people join the workforce, and over 600,000 of them do not find opportunities for productive work,” Ruto said, adding that those seeking to “set up formal businesses” will not face what he described as a bureaucratic monster of “multiple licenses.”

Like most countries in the world, Kenya is faced with the challenge of the rising cost of living caused by a drought ravaging the east of Africa and other economic factors, including oil prices and unprecedented inflation. Mr. Ruto, in his inaugural speech, outlined the steps he would take to curb the growing cost of living and make food available to the people at an affordable rate.

“Our priority intervention, therefore, is to make fertilizer, good-quality seeds, and other agricultural inputs affordable and available.  For the short rainy season, we have already made arrangements to make 1.4 million bags of fertilizer available at Ksh3,500 for a 50kg bag down from the current Ksh 6,500,” Ruto added.

In Kenya, like in most African countries, women are often not adequately represented in government. Leadership is usually associated with men. However, the recently conducted elections in the east African country witnessed a win for a significant number of women.

In his speech, Ruto said: “7 women were elected governors, up from 3 in the last election. Twenty-nine women were elected as members of the National Assembly up from twenty-three in 2017.  Seven women Deputy Governors and three women Senators were also elected.”

Mr. Ruto described it as a “tremendous achievement” that had enhanced the participation of women in politics.

The absence of Raila Odinga

One person notably absent at Ruto’s inauguration was his primary opponent and political rival, Raila Odinga. There were reports that an official invitation was sent to him, which he declined because he was still dissatisfied with the results of the elections.

Raila Odinga, 77, a veteran politician and leader of the country’s opposition party, had consistently claimed that the elections were rigged in favour of William Ruto. After the results were declared, Odinga approached the country’s supreme court. The court held that despite the controversies surrounding the polls, it was not convinced that William Ruto cheated his way to power. He accepted the court’s judgment but said he was not satisfied with it.

Regarding the Supreme Court’s judgment, Ruto said: “Dissatisfied parties exercised their right of petition before the Supreme Court, whose proceedings and determination not only gave comfort to the doubtful but also restored faith in our electoral and judicial institutions.”

Uhuru Kenyatta, the country’s outgoing president, was present at the inauguration despite not supporting Ruto in the just concluded elections. Kenyatta fell out with Ruto, his deputy, and supported his rival, Odinga, for the top job.

Ruto assured the political enemies and their supporters of an inclusive government, assuring them that they had nothing to fear.

“Their supporters will be my constituents. I will work with all Kenyans irrespective of who they voted for,” Mr. Ruto said.

Mr. Ruto ended his speech with a “promise to make every Kenyan proud and ensure the economic well-being of all.”

Rigathi Gachagua was also sworn in as the country’s new vice President.