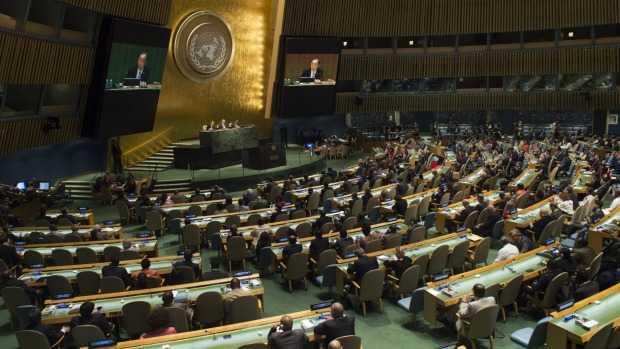 After two years of holding the annual United Nations General Assembly via video conferencing, leaders of over 150 countries are currently in New York for the largest gathering of world leaders. On top of the agenda was the need to unite the ever-dividing world and end the war in Ukraine, which has become the biggest conflict since World War II.

In his opening address, the president of the General Assembly, Csaba Kőrösi, described this time as “the most consequential moment of the last four decades,” adding that the world is now in a “permanent state of humanitarian emergency.”

Mr. Kőrösi talked about the over 300 million people in urgent need of aid and protection, noting that from January till now, there is an increase of 10 percent in the figure. He also addressed the issue of climate change that has caused an “alarming level” of hunger.

The official opening of the UN general assembly would be incomplete without addressing the issue of Russia.

“Who would have imagined that war would return to Europe? That the nuclear threat would be back in political discourse to settle a dispute with a neighbour?” the UNGA president asked.

Other issues addressed by the UNGA President include the flood ravaging Pakistan, threats to human rights, and the need to revitalize the Security Council of the UN before banging the ceremonial gavel to officially open the UN debate.

A world where ‘trust is crumbling’

As Secretary-General Antonio Guterres climbs the stage to deliver his address, he could not see a world that was willing to work together. He told the world leaders that nations were “gridlocked in colossal global dysfunction” and were not ready or willing to tackle the issues that threaten the future of humanity and the planet.

“Trust is crumbling, inequalities are exploding, our planet is burning. People are hurting, with the most vulnerable suffering the most,” Guterres said.

He, however, added that all hope is not lost  if there is cooperation and dialogue among the nations of the world, “no power or group alone can call the shots.”

“Let’s work as one, as a coalition of the world, as united nations,” he told the leaders gathered for the annual UNGA.

A debate on Russia and Ukraine

Before the start of the UNGA, top EU diplomat Josep Borrell said: “This year, Ukraine will be very high on the agenda. It will be unavoidable,” adding that “there are many other problems … but the war in Ukraine has been sending shock waves around the world,”

A few world leaders that have addressed the stage share the same sentiment with Josep Borrel. While some of them feel there is an urgent need to add to Russia’s sanctions, others think it is time to come to the negotiating table.

German Chancellor Olaf Scholz said there was “no justification whatsoever” for Putin’s invasion of Ukraine, describing his actions as an act of “imperialism” that could cause major disaster to the world.

“If we want this war to end, then we cannot be indifferent to how it ends. Putin will only give up his war and his imperialist ambitions if he realises that he cannot win,” Scholz said.

On behalf of Germany, he pledged not to accept a peace deal where conditions are set by Russia and promised to continue supporting “Ukraine with all our might financially, economically, with humanitarian assistance and also with weapons.”

There should be no neutrality

President Emmanuel Macron of France thinks there should be no neutrality in the ongoing conflict between Ukraine and Russia. In his emotional address, he called on world leaders to support the western sanctions imposed on Russia, adding that those who remain silent on the issue are “serving the cause of a new imperialism, a contemporary cynicism that is destroying the world order.”

“Who here can defend the idea that the invasion of Ukraine justifies no sanction? Who of you here can consider that the day when something similar with a more powerful neighbour happens to you, there’ll be silence from the region, from the world?” Macron asked.

Mr. Macron called on the world leaders to support the path of peace by forcing Russia to give up the choice of war by imposing sanctions that will make Russia realize the cost of the war and give up on it.

“It’s not about choosing a camp between East and West, but the responsibility of everybody to respect the UN charter,” he said.

While most world leaders think the issue is how to end the war in Ukraine, the President of Lithuania, Gitanas Nauseda, said it was time to set up a tribunal that will look into the atrocities committed by the Kremlin.

“There must be no impunity for the brutal crimes and atrocities committed during the war. Guaranteeing justice and accountability is of vital importance from the standpoint of credibility of the United Nations and the international community,” Nauseda said.

Despite the call by Emmanuel Macron to end the neutrality of the war, some world leaders are still in the middle, calling for peace.

President Macky Sall of Senegal is one of those leaders. He was one of those that addressed the UNGA on Tuesday. He is also the president of the African Union.

“I have come to say that Africa has suffered enough of the burden of history; that it does not want to be the breeding ground of a new Cold War, but rather a pole of stability and opportunity open to all its partners, on a mutually beneficial basis,” he said.

The Senegalese President called on the UN to establish a mediation team that would broker peace between the two countries.

It appears the voice of Macky Sall was not loud enough, as Qatar’s Emir Shiekh Tamim bin Hamad Al Thani added to his call for peace. According to the leader of the Islamic country, whether peace talks are held now or not, it would still be the only option later.

“We call for a ceasefire and the immediate pursuit of a peaceful solution to the conflict,” he said. “This is how the matter would eventually end anyway, no matter how long the war lasts.:

“Its continuation would not change this result, but would rather increase the number of victims, and double its severe consequences for Europe, Russia, and the global economy in general,” he added.

It appears that most world leaders want an end to the war, but their approaches differ. Turkish President Recep Tayyip Erdogan, who struck some agreements between the warring sides, also thinks a little push for talks could bring about the end to the war.

President Joe Biden of the United States and Volodymyr Zelenskyy would address the Assembly later today. The presidents of China and Russia were not in attendance.