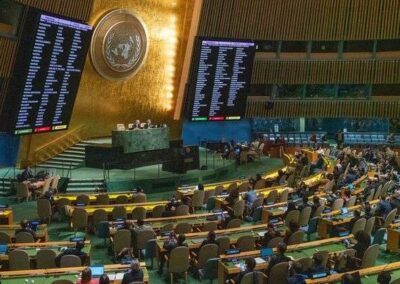 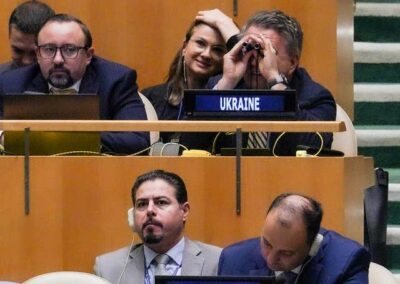 The United Nations General Assembly has voted overwhelmingly to condemn Russia’s annexation of four Ukrainian regions. 143 countries voted in support of the resolution, 35 abstained, and four others were on Russia’s side. The resolution was titled: “Territorial integrity of Ukraine: defending the principles of the UN Charter.”

The four sides that voted in support of Russia’s annexation of the Ukrainian regions were Belarus, the Democratic People’s Republic of Korea, Nicaragua, and Syria. Notable nations that abstained are China, India, and South Africa.

Antigua and Barbuda is one of the 143 nations that voted in support of the resolution. The UK, Canada, Germany, France, the United States, Italy, Japan, and 26 African countries also supported the resolution.

Wednesday’s overwhelming condemnation of Russia’s annexation of parts of Ukraine was even more than the 141 nations that voted in March to condemn Russia’s war against Ukraine.

President of the United States, Joe Biden, said what happened on Wednesday was an indication that the world has become more united since the war started in Ukraine.

“Nearly eight months into this war, the world has just demonstrated that it is more united and more determined than ever to hold Russia accountable for its violations,” President Biden said in a statement.

“Together with the UN General Assembly, we will not tolerate illegal attempts at annexation or the theft of a neighbor’s land by force,” Biden stated.

President Biden stressed that Ukraine has the same rights as every other sovereign country and that “Russia cannot change borders by force.”

Zelensky thanks the 143 states for the support

President Volodymyr Zelensky has sent a thank you message to all the nations that voted in support of the UN resolution.

“Grateful to 143 states that supported the historic [United Nations General Assembly] resolution,  “Territorial integrity of Ukraine: defending the principles of the UN Charter,” Zelensky wrote on Twitter, adding that Russia’s attempt to annex the territories of Ukraine is worthless.

The Ukrainian president wrote his thank you message on Twitter in multiple languages.

Despite the overwhelming condemnation of Russia’s actions by three-quarters of the UN member states, Moscow believes it was the engineering of Western countries using “diplomatic terror.”

“The methods of diplomatic terror were used by the West, shamelessly, openly twisting the arms of developing countries, and threatening them with all sorts of punishments,” Sergey Lavrov said.

“Only by such blatant blackmail, by such threats, was it possible to make that outcome possible,” Lavrov said, adding that Russia understands everything perfectly well.

Before Wednesday’s vote, the United States and its allies lobbied to get more nations to their side. US Secretary of State, Anthony Blinken, convened a virtual meeting on Tuesday with representatives of more than 100 countries. At least there was an improvement in the 141 countries who voted that Russia should withdraw its troops from Ukraine in March.

When the resolution was initially submitted to the United Nations Security Council, Russia, a permanent member of the Council, used its veto to push it aside. An emergency UN General Assembly was then called so that all 193 members of the United Nations could participate in the process. Some are saying that it was time for Russia to lose its seat as a permanent member of the Security Council.

This is not the first time the United Nations is voting against Russia’s actions. China believes it is one of those usual resolutions that will yield no result hence it abstained.

China’s Deputy UN Ambassador, Geng Shuang, said China’s abstinence was because the UN resolution will not be helpful and that the only way out was to resume dialogue.