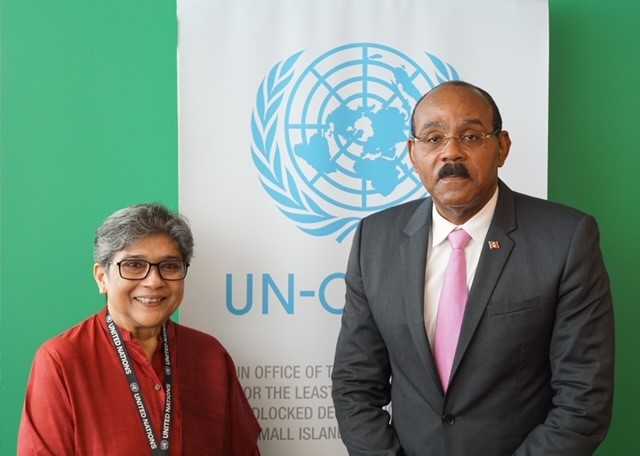 Clearly, it’s been a busy week for Prime Minister Gaston Browne and his colleagues in New York as meetings and greetings continue to take the better part of their day. Not like they mind it.

On Wednesday for instance, Prime Minister, Gaston Browne, met with the UN Under-Secretary-General and High Representative for the Least Developed Countries, Landlocked Developing Countries, and Small Island Developing States (OHRLLS), Her Excellency Rabab Fatima, on the margins of the 77th Session of the United Nations General Assembly (UNGA) at the United Nations Headquarters in New York.

According to reports, Prime Minister Browne opened the discussions by extending the warmest congratulations to Fatima, who was recently appointed as the High Representative of OHRLLS in August 2022.

Her new role comes with the challenging task of mobilizing international support for the most vulnerable United Nations Member States by ensuring that their urgent needs remain high on the international agenda.

Prime Minister Browne took the opportunity to discuss priorities for Small Island Developing States (SIDS), especially in his capacity as Chair of the Alliance for the Small Islands States (AOSIS).

Some crucial points he raised include the issue of Climate Change where SIDS hope to chart a way forward for loss and damage finance; the use of a Multidimensional Vulnerability Index (VMI) for vulnerable states to have better access to concessional financing; and the Fourth UN International Conference on SIDS, which Antigua and Barbuda will host in 2024.

The conference is a defining moment for SIDS to focus global attention on its unique vulnerabilities.

She expressed the unwavering support of the OHRLLS in ensuring that the conference will be a resonating success filled with concrete deliverables for SIDS.

The OHRLLS High Representative also took the opportunity to reaffirm support for SIDS in the fight against climate change and the resulting loss and damage and to build consensus on the application of the VMI.