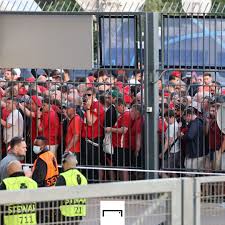 It was the show-piece game to bring the 2021/22 season to a close. The Champions League Final played on 28 May between Liverpool and Real Madrid was a mouth-watering proposition, which predictably attracted huge interest from both sets of supporters, with tickets at a premium.

The game took place at Stade de France in Paris, but it turned into something of a nightmare for the Merseyside club’s followers, as serious security issues led to huge numbers having to battle through crushes outside the ground and being subjected to police bullying tactics including indiscriminate tear gas attacks, and street crime from local gangs, with many not able to make it into the stadium, and those that did being left either physically or mentally scarred by the whole experience.

Rather than take responsibility for the chaos and shameful organisation, those in charge chose to try and deflect blame to anyone other than themselves, focusing mainly on the Liverpool supporters, claiming “fake tickets” were at the heart of the troubles. The game was delayed by 35 minutes with the Spanish outfit winning a disappointing match 1-0.

Now four months after the event, approaching 2,000 Liverpool fans who believe they have a valid claim are to sue UEFA (European football’s governing body), over negligence and incompetence.

The individuals pressing ahead with their lawsuits are being represented by two Liverpool law firms – Bingham’s Solicitors and Leigh Dy – as well as the global company, Pogust Goodhead. Amongst the list of claims are “breach of contract in ticket sales” and “gross negligence over a duty of care” which all supporters are entitled to expect at major sporting contests, from those left physically and or, psychologically harmed.

Bingham’s, who are to look after 1,450 clients have described how many have reported “terrifying scenes”; whilst experts from Leigh Day, who will take care of a further 400 clients, believe there was a genuine failure to provide a “safe and secure environment” for supporters, who they say were treated in a truly shocking manner, both at the match and in the aftermath, where they say there were situations taking place that left people actually fearing for their lives.

What actually happened outside the stadium?

A large number of Reds fans have said that there were long queues in the hours leading up to kick-off, where the police became increasingly heavy-handed. It seems that intense bottlenecks developed at turnstiles, triggered by a decision to suspend preliminary ticket checks further back in the line, taken to relieve crowd pressure on the ramp at the southern entrance to the concourse.

At these initial checkpoints, stewards were expected to activate digital tickets with a swipe-card, but by removing this specific check, it meant many supporters arrived at the turnstiles without an activated ticket, which resulted in the ticket having to have this requirement undertaken manually, slowing things up considerably. Fans spoke of being forced into a metal fence and carried along without any control and witnessing incredible tension amongst the crowd, with a description of “shambolic” being used frequently.

It seems that one of the train lines serving the stadium was not working, meaning fans had to take the one remaining line, which resulted in everyone being squeezed through a narrow underpass towards a single checkpoint at the perimeter outside the ground. Searches were apparently given to fans multiple times, which obviously only heightened the delays. Around this point the crush began to intensify, with fans lifting each other up and over the walls to try and escape the danger. Just to compound to the problems, with the police barricade breached, local youths  joined the crowd, attempting to snatch bags and other possessions.

“Save the women and kids”

As anxiety increased and panic began to set in, instead of helping to calm the situation, police made the astonishing decision to douse fans indiscriminately in pepper spray, causing the crowd to stampede backwards and leaving some of them vomiting, and all choking. Other supporters spoke of seeing police punching fans without provocation. Finally at the gates, fans found some main entrances closed and were manhandled through the turnstile without their tickets being scanned and chaos ensued, and the unthinkable state of affairs occurred where it was a case of “save the women and children first,” which is obviously unbelievable at a football match.

Amongst the injuries sustained were broken ribs, crush traumas, fractured arms, cuts, bruises and psychological symptoms of anxiety and post-traumatic stress disorder. People totally believed they were in serious danger of losing their lives.

Just to add to the stresses of the fans on the day, they were subjected to attacks from locals carrying knives who stole phones, watches, and bags without any intervention from watching police. Stewards later confirmed seeing English supporters being violently mugged by hostile locals, as well as disturbingly, two separate incidents of attempted sexual assault on terrified fans.

After such a traumatic experience fans would have hoped to at least get away from the stadium without further problems, but at the final whistle police lined up in front of the Liverpool section, and proceeded to fire tear gas into the crowd when local youths rushed the gates to confront the fans dispersed.

In the immediate aftermath of the game there were claims flying about from Government ministers and match officials that tried to deflect blame towards the Liverpool fans and in particular fake tickets. This was rebuffed and the problems were actually down to QR codes and the application itself, which suffered from connectivity issues.

Initially the French authorities outrageously tried to claim that around 30,000 to 40,000 fake tickets were the reason for the problems before the game. It was described by Interior Minister Gerard Darmanin as “Massive, industrial-level ticket fraud.” They amended this figure down to 2,500, which they say were detected at turnstiles. They still would not accept responsibility, instead they tried to point the finger at those fans who did not turn on their Bluetooth, as instructed. UEFA declined to give details of the anti-fraud measures used on the tickets, only saying: “Tickets contain a number of security features and the design is different for every single competition.”

It was confirmed after the game that there is no specific training for stewards. All that is required is a professional card verified by the Interior Ministry. It seems certain that those on duty at the Stade de France on 28 May, were not all in possession of such a card.

Those experienced stewards who worked that night have been reluctant to discuss the events of the night, but those that have spoken admit they were completely overwhelmed and that they were working alongside colleagues who had no certification, or indeed any previous security training and were in actual fact, on their very first assignment at the final, having been recruited just 24 hours earlier.

The process of getting to the truth was made significantly more difficult by the loss of video surveillance footage from both the stadium and the train network, because there was no judicial request to preserve it. Seemingly, CCTV footage of the stadium is automatically deleted after seven days.

However, as an investigation was opened a day after the game, there would have been “plenty of time” to request the footage and this would normally be the first line of any enquiry. It also emerged that all the CCTV from outside the stadium on the day of the final was deleted too, meaning that images from a total of 220 cameras were deleted, which from those with something to hide, might seem a little convenient.

A French Senate inquiry has now concluded that initial assertions by UEFA and the French government that Liverpool fans had been mainly responsible for the trouble by not having proper tickets, had no solid foundation. The inquiry instead cited a “string of dysfunctions” including a lack of preparation by authorities and UEFA, as well as poorly executed security arrangements. Liverpool had gathered 8,500 testimonials from fans, as well as photographs and videos, to submit to the independent review commissioned by UEFA.

Speaking at the Senate, head of policing for the match, Didier Lallement, defended the tactics he used, insisting his “red line” was to save lives, so the use of tear gas outside the stadium was the only means available to get the crowd to move back without charging at them, which would have been in his words: “devastating”. He added: “I am fully aware that even families were tear-gassed and for this I am very sorry, but there was no other way.” He did however admit that the security operation was an obvious failure.

The 30-page report highlighted that there was a catalogue of errors and failures by authorities that culminated in the chaos at the ground. It pinpointed lack of preparation for travelling fans, including mistakes with signposting safe routes, aggravated by a strike on the underground train line and a “rupture” in checks and security measures around the stadium; adding that the organisers and police officers were comprehensively overwhelmed by the whole situation.

It accepted that this combination had put fans’ lives at risk and noted a lack of contingency planning with regards to ticketing and in particular their activation, undoubtedly played a major part. The inexperience of the stewards only served to make a bad situation worse. There were flaws in the whole operation, with a chain of failures, and whilst the report stopped short of apportioning blame, it did recommend improvements, which the government says will be implemented.

What is the likelihood of success?

It is difficult to know just how good the complainants chances are for a successful outcome, but there is a very strong feeling in Liverpool to push this all the way, get proper admission of guilt and have the right people made accountable.

There will have been people in attendance who were at Hillsborough back in 1989 and no doubt had horrific flashbacks to that tragic day. The city proved in that incident that they will push for justice, how ever long it takes, so those currently trying to wriggle out of their responsibilities, should be aware that they will inevitably have to face up to their failings.