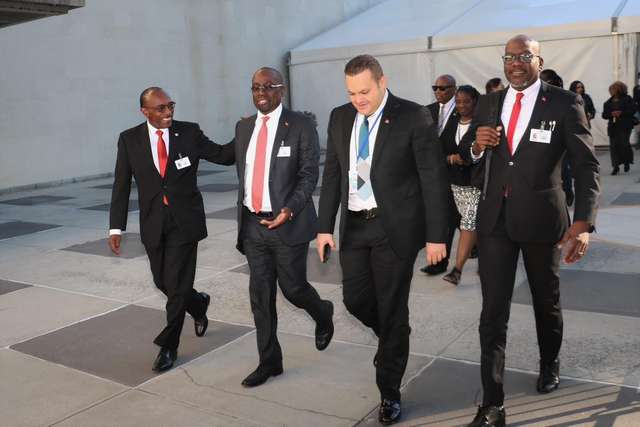 ‘We went to New York with a two-part agenda. One was Antigua and Barbuda’s interest, represented through several bilateral meetings, participation in several thematic engagements, and the presentation of our national statement, and on the other part, the leadership of the shared positions and interests of SIDS. I am pleased to report that both went exceptionally well.’

Greene expressed total satisfaction with the respect accorded to Prime Minister Browne by regional and other global leaders. ‘Our country’s leader and leadership are very well respected.

Prime Minister’s representation at the UN was exceptional. Not only did he present a national statement that resonates in the aftermath of the GA but other world leaders have either referred to his leadership in their national statements or have since requested copies of his speech. UNGA 2022 was a proud and humbling moment for all Antiguans and Barbudans as our leadership shone through and was embraced on the world stage.’

Minister Greene went on to thank colleague ministers Sir Molwyn Joseph and Daryl Matthew for their role in delivering on a very packed UNGA agenda. ‘

“Their presence and participation were complimentary and served to bolster our team’s ability to meet and keep our agenda. Our climate engagements this year, as chair of AOSIS, were simply demanding, and to have minister Joseph present aided greatly. As for minister Matthew, his first call was the education meeting on the margins but his supporting role throughout allowed us to successfully negotiate, promote and defend Antigua and Barbuda’s interests,” he said.

Finally, Greene was fulsome in praise for his staff at the Antigua and Barbuda UN Mission in New York.

“On behalf of prime minister Browne, the team of ministers who worked in NY during UNGA, on behalf of all of our citizens who today bask in the positive global attention emanating from the just concluded GA, and on my behalf as a minister with responsibility for our country’s international image through the ministry of Foreign Affairs, I place on record our abiding thanks and appreciation to Dr. Aubrey Webson and his staff for the outstanding organization and execution of UNGA 2022. The journey of maintaining a positive and effective international image continues,” he added.