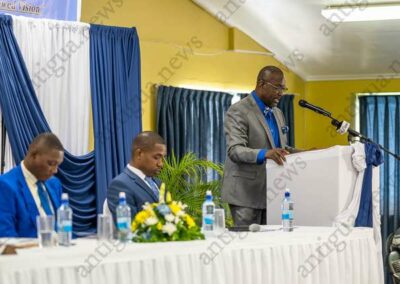 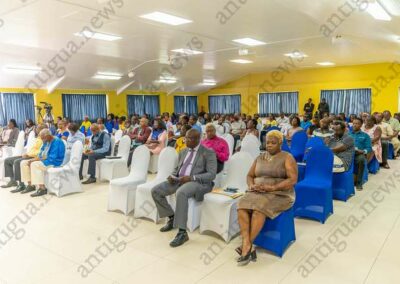 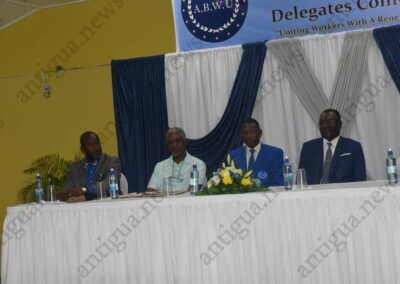 The General Secretary of the largest trade union body in Antigua and Barbuda has made it vehemently clear that workers should position themselves to adapt to the changes in the workplace brought on by globalization.

David Massiah, the man at the head of the Antigua and Barbuda Workers Union raised that awareness when he addressed the 55th Annual Delegates Conference on Sunday.

Getting familiar with the idea of adaptability, as well as learning how to strengthen it, is key to helping you get ahead at work was clear from Massiah’s presentation.

In his address, he spoke about changes brought on by Covid-19, Monkey Pox, and the Russian invasion of Ukraine, saying that all of these are significant events that will have an impact on the workforce.

“All the issues raised above help shape how as the representatives for workers, we create a vision for workers’ representation in the immediate future. We will start with the assumption that those who trade their labor in the Public or the Private sector, whether at manual, technical or professional levels, need to have several safeguards,” he said

Some of these “safeguards”, according to Massiah range from safe and secure lifelong employment, income protection when faced by adverse circumstances, and affordable health care to being assured freedom of security from crime and wrongdoing.

“Our Trade Unions have been fortunate to secure most of the conditions highlighted above however, there is now a major consideration, that we need to review which includes the relationship between Labour, the Private Sector, and the Government. I state categorically that Labour is one and indivisible. The social partnership model comprising: Labour, Private Sector and Government must have as its primary interest, the welfare of the working masses,” Massiah said.

Meanwhile, Massiah called on trade unions to work together to ensure that political parties and economic elites maintain the high standards required of them, saying that while Trade Unions must be wary of alliance with politics, they must be willing to work with any party which supports the interests of the Union and workers.

“It is becoming clear that the voice of the Trade Union also has to be varied to suit the new environment. To this end, the Trade Union must employ a variety of strategies to do its work. For instance, as our Officers complete trade union duties such as missions, and agreements: podcasts ought to be more utilized than ever before,” he said

Another major change highlighted by Massiah is the significant changes, impact, and anxiety on the entire workforce by governments the world over, including Antigua and Barbuda, to transition from fossil fuel-dependent societies to what is considered low-carbon energy societies without the meaningful dialogue or involvement of some stakeholders.

“Simply put, stakeholders are engaged long after the decisions are made some time.   The reality here is that this change from a fossil fuel economy to a low-carbon energy economy will see the elimination of many traditional jobs as we know them for new ones, in some cases.  This major transition in our society demands the total involvement of all stakeholders at every level.  The Union’s role will and must be to assist in the transition, in preparing the workforce to meet some areas,” he said.

A large part of Massiah’s presentation focused on climate change saying that it will undoubtingly create major shifts within the Labour markets, the economies world over as well as our societies.

He did not fall short of using his turn at the mic to bat for LIAT workers, especially those who were sent home without compensation.

“In Antigua and Barbuda, the demise of LIAT as a regional carrier has changed the sector forever. The uncertainty as to when the former workers will ever receive their legal entitlements, after being made redundant, is very high.  These skilled workers from within the Aviation industry will no doubt have to seek to be reskilled in other areas if they are to survive these harsh economic times, and the pending shifts in the world of work, since the upswing for a vibrant aviation sector in Antigua and Barbuda remains uncertain,” he said.

He ended his message by reminding those listening that solutions to existing problems, new path-breaking programs, and improved membership satisfaction are all key to success in the labor movement.

“We place these three as pivotal topics for our deliberations in our Conference and look forward to your participation and interaction,” he said

Meanwhile, President of the ABWU Ken Riley today, thousands of workers across the country share the understanding that the rights and well-being of workers are more than just an afterthought

He said despite the challenges, unity continues to prevail within the union, using the Covid-19 pandemic as the yardstick.

He said while not being boastful, the ABWU shelled out thousands of dollars to provide food for its members who were hit by the pandemic.

“We delivered hundreds of food packages to hotel workers and those employed in other sections of our unions. We distributed items of thousands of dollars in food vouchers for LIAT employees and other members…we did this not to boast but because we consider it a moral responsibility,” he said.

The featured address was delivered by Sir Carl Roberts–former High Commissioner to the United Kingdom.

Greetings came from a wide section of the public and also from regional and international high-ranking officials.

Over 100 delegates are participating in the conference being held under the theme “Uniting workers with a renewed vision”. The Conference will also hear reports from various workplaces and review several matters of business.

Another important highlight of the gathering will be the election of new officers to serve on the Union’s executive body for the next two years.

The ABWU is the largest union operating in the local private sector and is affiliated with key international and regional labor organizations.