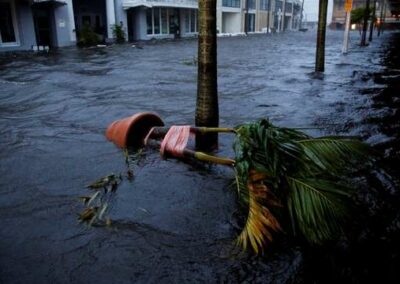 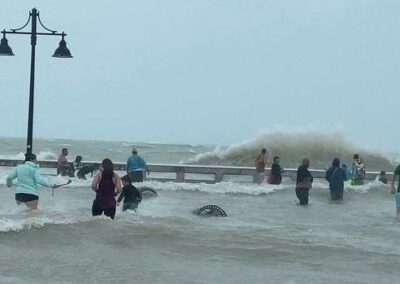 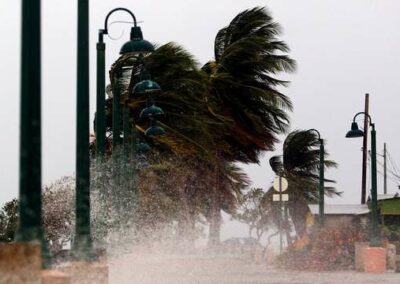 The long-awaited Hurricane Ian has finally landed in Florida, causing severe damage and trapping residents in their homes. For many, it was the worst disaster in their lifetime.

“Hurricane [Ian] has made landfall as an extremely dangerous Category 4 hurricane near Cayo Costa, Florida, with maximum sustained winds at 150 mph,” the National Hurricane Centre said on Wednesday.

As of Wednesday morning, the fears among Floridians increased after the National Hurricane Center confirmed that the Ian was just shy of category five and could be more dangerous than predicted.

However, upon arrival in Florida, the anger of the storm reduced, and as of late Wednesday, it had decreased significantly to around category one.

“In some areas, we think it’s hit 12 feet. It is our meteorologist’s view that the storm surge has likely peaked and will be less in the coming hours,” Florida Governor Ron DeSantis said on Wednesday evening.

While some heeded the call by the government to evacuate the regions, others felt it was one of the usual hurricanes, and there was no need for that. Soon after Hurricane Ian struck, there were calls for help, especially from those that refused to heed the evacuation orders. They realized it was arguably the worse disaster to hit the State.

For those that heeded the warning calls, the Hillsborough County Sheriff’s office thanked them for leaving their homes behind.

“We know the decision to leave behind your home and head to a shelter to ride out Hurricane Ian, is not an easy one to make. Thank you for heeding warnings and making sure you and your loved ones are safe,” the office said on Facebook.

About 7,500 residents in the County left their homes and are currently taking shelter in designated places.

“The worst I have ever seen”

The mayor of Fort Myers, Kevin Anderson, said the storm was the worst he had seen in the almost 50 years he has been in Florida.

“I’ve been here since the mid-70s — this is actually by far the worst storm I have ever seen,” Anderson told CNN. He added that windows of houses were blown up by the storm, and those that refused to heed the evacuation orders are now stuck.

“The streets are flooded, and emergency services couldn’t get to them if they wanted to,” he said.

Collier county Sherrif, on Wednesday, said there were emergency calls for help regarding citizens that are trapped under water. Unfortunately, the emergency 911 is down in some counties, and calls are being diverted.

“Here’s some tough news you need to know. We aren’t holding back: We are in call triage mode. We are getting a significant number of calls of people trapped by water in their homes,” the statement by Collier County Sheriff said.

The quest to rescue those not ready to be rescued

Before Ian landed, officials gave evacuation orders and stressed that calls for help might be ignored after the hurricane hits for safety reasons. That position has not changed as rescue operations are put on hold in some areas as it is not safe to do so at the moment.

“The folks were told in these areas of the hazards, they were given time to be able to make arrangements and to leave. Some chose not to do that. They would have probably been better off doing that. Nevertheless, if people are in harm’s way, we’re going to go and do whatever we can to help those folks,” Florida Governor Ron DeSantis said in a news conference on Wednesday.

“By and large, until the storm passes, they (emergency responders) are not going to go into a situation for rescue and put their own folks at risk,” DeSantis continued. “Local first responders will deploy as soon as it’s safe to do so,” DeSantis added.

The Collier County Sheriff said its emergency workers rescued up to 30 persons trapped in water. The statement added that things might get worse before they get better.

“Our East Naples deputies did 30 rescue missions today. We are still collecting numbers from other areas. We are still rescuing people,” the statement said.

“The worst is yet to come”

Mayor of Tampa Jane Castor told residents that the worst of Hurricane Ian might still be on its way.

“There has been somewhat of a lull, especially since Hurricane Ian made landfall down in South Florida, so there may be the idea that we’ve been through the worst of it, it is yet to come for Tampa Bay,” she said.

Ms. Jane told residents to take shelter as there would be higher winds and plenty of rain.

“We are still expecting widespread flooding throughout our city, and anywhere from tropical storm wind speeds to the possibly of category one hurricane wind speeds.,” she added.

While many residents are only concerned about how to survive the storm, a few residents saw Hurricane Ian as an opportunity to loot properties that are left behind. There were reported lootings in some areas, including an incident of someone trying to loot a gas station.

Lee County Sheriff Carmine Marceno, in a news conference on Wednesday night, said looters would be caught and sent to jail.

“The one thing I do have is absolute, and that is a message that’s very clear for any of those individuals that think they’re going to go out there and loot or prey on people during this horrific event: you better think twice,” Marceno said at a news conference.

The storm could have peaked

Although the situation is still rough in Florida, some specialists believe the storm has reached its peak.

Cody Fritz, a storm surge specialist at the National Hurricane Center, said: “The peaks have likely occurred given the storm has weakened and continues to move inland.”

“There’s still plenty of onshore flow along the coast keeping water levels elevated, so while the peak surge values will decrease here relative to the previous value, I still expect waters to be up for a while and the need to maintain the storm surge warnings,” Fritz told CNN.

Reports released on Wednesday night by the National Hurricane Center suggest that Hurricane Ian has depreciated to category one, but flood levels could remain high for some days.

For now, over two million people in Florida are without electricity and internet services. There are still a lot of emergency calls that have not been answered. However, officials say they will commence a full rescue operation on Thursday morning.