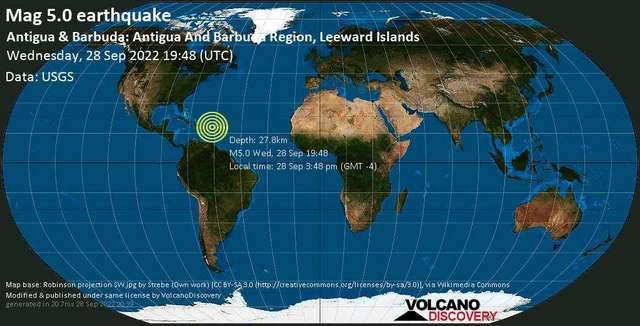 Several residents reported having felt the shaking, some more than others.

“Wow. I thought the building was going to fall”, one woman said on social media.

The exact magnitude, epicenter, and depth of the quake might be revised within the next few hours or minutes as seismologists review data and refine their calculations, or as other agencies issue their reports.

Generally, quakes of this magnitude are recorded by more than one agency and the results can vary, with subsequent reports that come in after the first one often showing more accuracy.

Based on the preliminary seismic data, the quake should not have caused any significant damage but was probably felt by many people as light vibration in the area of the epicenter.

Weak shaking might have been felt in Codrington located 50 km from the epicenter, Codrington 50 km away, Piggotts 92 km away, Saint John 94 km away, and All Saints 97 km away.