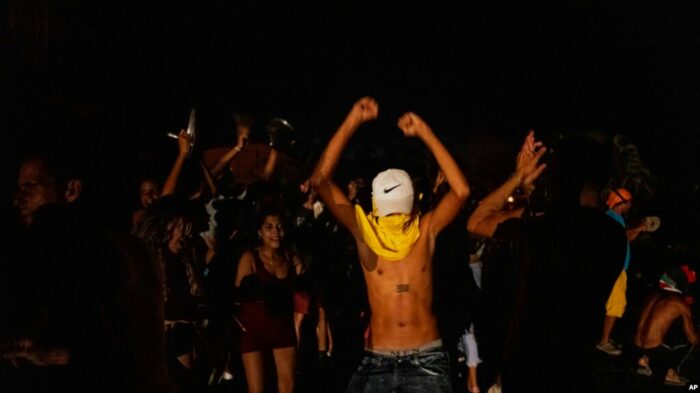 Already plagued with poverty and political issues, Cuba entered the second day of protest over ongoing blackouts triggered by the passage of Hurricane Ian.

Although the power company restored services to more neighborhoods across Havana on Saturday, protests continue including some of the largest demonstrations since widespread anti-government rallies in July 2021.

Ian knocked out power to the whole country of 11 million people when it plowed through western Cuba earlier this week. By early Saturday, officials said electricity had been restored to more than 82% of customers in Havana, a city of more than 2 million, but those still in the dark had grown increasingly anxious.

At one point, the group began to chant for freedom, or “libertad,” in Spanish, as protesters marched through a dark, densely populated district that has been without electricity since Hurricane Ian slammed into the island on Tuesday.

Reports on social media showed small protests had flared again at scattered locations across Havana and just outside the city on Saturday afternoon. The demonstrations, which remained largely peaceful, appeared confined to those places where power had not yet been restored.

Street protests in communist-run Cuba are very rare. On July 11, 2021, anti-government rallies rocked the island, the largest such demonstrations since Castro’s 1959 revolution.

Internet communications in Havana appeared to collapse again for the second night on Friday as protests flared, making mobile calls and messaging impossible until around 4 a.m. on Saturday.

Outside Havana, vast swaths of the island were still in the dark as work crews continued to repair electric poles and lines and remove trees from roads.

The Wall Street Journal reported late on Friday that Cuba’s government has made a rare request for emergency assistance following the hurricane from the administration of U.S. President Joe Biden.