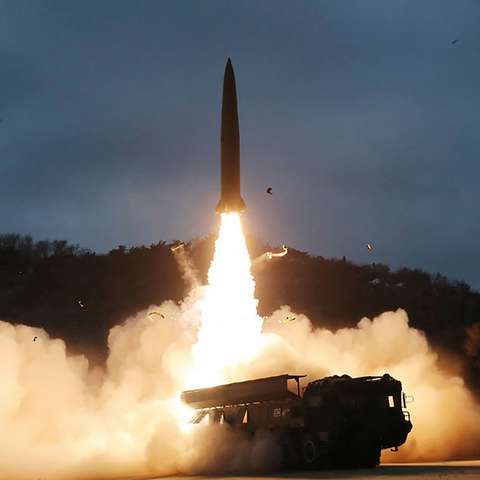 North Korea has once again instilled fear in its neighbors after it fired a ballistic missile over Japan for the first time in five years. The missile traveled across Northern Japan in the early hours before landing in the Pacific Ocean. It was the fifth launch in 10 days.

“A projectile that appears to be a North Korean ballistic missile has likely flown over Japan,” the Prime Minister’s Office tweeted on Tuesday morning.

Train services were immediately suspended in the regions after the missile was detected by the Japanese coast guard and South Korea’s Joint Chiefs of Staff. Residents were also advised to remain in safe places.

This year alone, North Korea has launched 23 missiles. Tuesday’s missile traveled 17 times more than the speed of sound, flying a distance of 2,858 miles (4,600 kilometers) with an altitude of 621 miles (1,000 kilometers). Experts say the most likely missile to make this trip is the Hwasong-12.

Jeffrey Lewis, director of the East Asia Nonproliferation Program at CNS told CNN that the Tuesday missile was not new, as the Asian country has been testing it since 2017.

“This is a missile that North Korea started testing in 2017,” Jeffrey Lewis said. “So it’s not really a new missile.”

The president of South Korea, Yoon Suk-yeol, and the Japanese prime minister, Fumio Kishida, have condemned North Korea’s actions using the strongest possible terms. Both leaders held separate emergency meetings in their countries soon after the missile flew past.

“(The NSC) made it clear that continued North Korean provocations cannot be tolerated and that there would be a price to be paid,” President Yoon of North Korea said in a statement.

The statement added that South Korea would take steps to prevent a further occurrence and strengthen sanctions against its neighbors.

“North Korea’s series of actions, including its repeated ballistic missile launches, threatens the peace and security of Japan, the region, and the international community, and poses a serious challenge to the entire international community, including Japan,” a spokesperson of the government Hirokazu Matsuno, told a news conference on Tuesday morning.

Defence Minister, Hamada Yasukazu said Tokyo did not consider shooting down the missile but was ready to look at the option of a counterattack and other possibilities.

Jeffery Lewis said the missile test was a “violation of [Japan’s] sovereignty,” and it was within Japan’s right to shoot it down.

The US is open to negotiations, but ready to defend its allies

The United States on Tuesday condemned North Korea’s nuclear test, describing it as “dangerous and reckless.”

The statement added that Jake Sullivan, the national security adviser, was in talks with his South Korean and Japanese counterparts to discuss “robust joint and international responses” to the threats.

The State Department’s assistant secretary for East Asian and Pacific affairs, Daniel Kritenbrink, said it was time for every country including China and Russia to join hands in preventing North Korea from evading its sanctions.

He added that the United States was ready to dialogue with North Korea on its nuclear program but that “the only response we have seen thus far is an increase in the number of ballistic missile launches and other provocative actions.”

“This is not a productive path forward, neither for North Korea or for any of us,” he added.

He called on the international community to come together against North Korea, insisting it is the “only path towards long-term peace and stability is through negotiations.”

Kritenbrink said the United States was ready to impose fresh sanctions on North Korea and also expressed the country’s resolve to defend its allies.