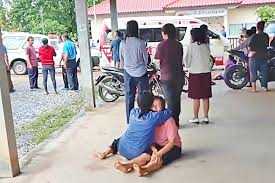 A seemingly deranged former police officer, wielding a shotgun, a pistol and a knife has gone on the rampage at a childcare centre in Thailand, which has tragically cost at least 37 people their lives, a figure that heartbreakingly includes 23 children. The savage and horrifying attack in Nong Bua Lamphu province, has left a country in shock and disbelief, and trying to somehow understand how this could have happened.

The attacker stormed the centre in the town of Uthai Sawan, which is just over 300 miles north-east of Bangkok, at about 12:30 local time on Thursday 6 October. He apparently shot four or five officials initially, before forcing his way into a locked room where children, some as young as two, were innocently sleeping. He then proceeded to attack and kill all but one of them.

Hardened police officers were visibly shaken at the carnage they were confronted with, as bodies lay strewn inside and outside the building. The maniac raced from the scene, to his home a short distance away, and took the life of his wife and son, before killing himself.

Former lieutenant behind the mass murders

The crazed assailant was named as 34 year old Panya Khamrab, his motive remains unclear, but it was confirmed by National Police Chief Damrongsak Kittiprapat that he used to be a police lieutenant colonel before he was suspended for drug use in January this year, and then dismissed in June. He is understood to have appeared in court shortly before going on his murderous spree, related to the use and possible sale of methamphetamine. The verdict was scheduled to be delivered on Friday 7 October.

His son was previously a regular at the centre

The man used to bring his own son to the centre, but had not attended for more than a month. He used to drop his child off, and was always polite and chatty, a teacher commented. Several others said that was probably why he wasn’t approached sooner, as he would have been recognised and nobody would have suspected anything out of the ordinary.

Pregnant teacher amongst the victims

Headteacher, Nanticha Panchum, said that after settling the small children off for a nap, she heard five gunshots, which were the bullets that killed her colleagues, one of which was a teacher eight months pregnant. Distraught and bewildered by the events, she explained that some staff members were outside eating when the attacker pulled up.

As soon as the shooting started, teachers were trying to lock the door, but he broke in and went into the rooms where the children were sleeping. Khamrab then attacked indiscriminately, stabbing and slashing the poor defenceless children with a knife that has been described as being curved, “like one for cutting grass.”

His actions defy belief  and mercifully, but for nature lending a hand, it could have been much worse. Due to bad weather and a broken down school bus, the usual number of 92 children had been reduced to just 24 on the day, Ms Panchum confirmed, so the slaughter could easily have been even more horrendous.

Killing all before him

Once out of the building, the unhinged killer continued to take down anybody who crossed his path,  with eyewitnesses quoted as saying that he had driven into bystanders and opened fire at some of them, injuring several people as he made his escape. He then sped off in a white four-door Toyota pick-up truck, headed home, where he killed his wife and their young son, before turning the gun on himself and committing suicide.

Paweena Purichan, 31, said she was riding her motorcycle to the shop when she encountered the killer trying to ram other drivers as he fled the scene in a truck. “He intended to crash into others on the road, there was blood everywhere,” she said.

The number of dead is currently believed to be 37, although other reports are saying 38, but it seems definite that of the 24 little children only one survived. Three of those were just two years old. A further 12 people were wounded, and taken to Nong Bua Lamphu district hospital. This is a deeply shocking incident for Thailand, a country which has relatively high levels of gun violence, but nothing ever like this.

Community in state of shock and disbelief

This rural community has been left devastated by an attack which is just so difficult to try to comprehend. The area is quite remote and indigent, with most locals working as farmers and living on basic needs. Many will be traumatised, including those families who children were spared because monsoon rains had prevented them from going to the centre that morning. Naturally there will be a sense of relief, but also horror at what could have been.

King Maha Vajiralongkorn and Queen Suthida of Thailand will be visiting the injured on Friday, a spokesperson announced. The government said it was committed to providing financial aid to the families to help cover funeral expenses and any medical treatment required. Thai Prime Minister Prayuth Chan-ocha described the incident as “a shocking event” and declared that he has ordered an immediate investigation into the attack, insisting it be fast-tracked, to establish how such an awful and heartbreaking incident could occur. He too will visit the area on Friday.

United Nations Secretary-General Antonio Guterres has condemned the attack saying he was “shocked and saddened by the horrific mass shooting.” Other global leaders have been offering their sympathies to the families of the victims of this unthinkable attack. UK Prime Minister Liz Truss tweeted that she was shocked to hear of the horrific events in Thailand and said her thoughts were with all those affected and the first responders. She added that the UK stands with the Thai people at such a terrible time. Australian leader Anthony Albanese wrote that it was “impossible to comprehend the heartbreak” and said  that all Australians sent their love and condolences.

One in seven own a gun in the country

Mass shootings in Thailand are uncommon, although the rate of gun ownership is not, with illegal weapons regarded as pretty standard. There are believed to be approximately 10 million privately-owned guns in the country with a population of around 70 million people. The last tragedy of scale occurred in 2020, when a soldier killed 29 people and badly injured many more in the city of Nakhon Ratchasima. He reason was given as being angry over the outcome of a property deal.

Support welcome but will not explain tragedy

Support had already been coming forward, and it is likely much more will flood in over the coming days, but no amount of financial and emotional help will ever be able to explain how anybody could carry out such heinous acts on such innocence.

There are no answers at this stage, and because of the magnitude of the shocking crimes that have been committed, no answers are likely any time soon, if indeed ever; and this quiet area of Thailand sadly will probably never fully recover.