Cocaine found in bowls of curry 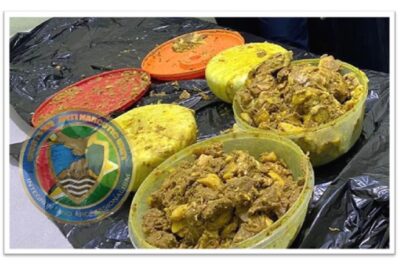 Lawmen in Guyana reported that two men were been arrested after cocaine was found hidden in bowls containing curry.

The drugs were found when the Customs Anti Narcotic Unit (CANU) officers intercepted a male passenger at the Cheddi Jagan International Airport (CJIA) who was about to travel on Jet Blue Airways Flight B61966 destined for JFK.

“A search of the passenger’s suitcase was conducted in his presence, which resulted in the discovery of a white substance suspected to be cocaine concealed in two bowls with curry,” according to reports.

A 36-year-old man of Parika Backdam was arrested and escorted to CANU headquarters with the suspected narcotics, which was subsequently tested and confirmed to be cocaine weighing a total of 13.8lbs with a street value of approximately US $31,000.

Further investigations led to the arrest of a 43-year-old man of Section C “D” Field Sophia.