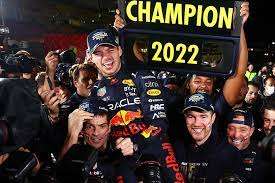 Max Verstappen has been crowned the world champion in Formula one for the second year running, although in a dramatic and truncated Japanese Grand Prix, it initially looked as though he was one point short and would need to go to the US for the next race, and clinch it there.

However, in a confused and almost comical situation, it transpired that interpretations of the regulations regarding resumed races, meant that the points awarded were greater than all the teams were expecting, so the flying Dutchman had indeed done enough to become the two times champ.

The race was badly affected by heavy rain making visibility for the first few laps practically impossible, and almost immediately there was an incident that could have ended in tragedy. Carlos Sainz had spun out on the “un-drivable” circuit and astonishingly a tractor was sent out to recover the Ferrari, but not before checking all other cars had stopped racing. Pierre Gasly, who was hit by a piece of advertising hoarding right on the nose of his vehicle, as he desperately tried to keep the Alpha Tauri under control, was just a couple of metres from certain death as his vehicle went past the recovery vehicle at high speed on the rain-soaked track, without any idea of it being there.

For long periods it seemed that the race would be abandoned. But eventually the skies cleared and it was allowed to resume, but with light fading it was cut short to a 28 lap contest instead of the 53 it should have been. Then more drama, the second Ferrari, driven by Charles Leclerc was clinging onto second place, behind the imperious Verstappen, with Sergio Perez hunting him down. After an incident at the final corner, with Leclerc struggling, the Ferrari crossed the line in second and the Red Bull in third. There then followed a quick decision by the authorities Leclerc was handed a five-second time penalty for leaving the track and gaining an advantage. Consequently, Perez was promoted up to second place.

At this stage however, it was thought that the points gained by Verstappen were not quite enough and he was in actual fact conducting a post-race interview when news came through that full points had been awarded. This was contrary to what every racing team believed would be the case, but it meant therefore that the brilliant Dutchman had indeed won the Championship with four races remaining of the 2022 campaign; joining Lewis Hamilton, Fernando Alonso and Sebastian Vettel as a member of the back-to-back titles club.

Of course this is now two Championships in a row that have ended controversially. Last year, the problem was that the race director Michael Masi applied the rules incorrectly during a late safety-car period, in the final Grand Prix of the season, denying Hamilton the victory he would have been assured of and deserved, allowing Verstappen to pass during a single lap of racing. Masi, was relieved of his post over the winter, but that was of no consolation to Hamilton, who although quite humble in defeat, could rightly feel cheated.

This second clumsy ending is from the FIA’s point of view, precisely what was not needed, amid increasing dissatisfaction at the way the sport is being run. It seems that a mistake made in the redrafting of the regulations after a weather-hit race at the Belgian Grand Prix last year, has led to the confusion. The intention was to re-write the rules to ensure that points could not be awarded unless there had been a genuine race, even if it was short.

Historically, it had always been the case that a shortened race would mean reduced points. As far as everyone was concerned as the race only just got over halfway to completion, there would only be three-quarter points. A clause inserted has caused all the misunderstandings regarding what can and can’t happen following suspensions and resumptions. Nowhere apparently, is there anything in the rules to cover the circumstances that played out at Sunday’s race, leaving it open to interpretation and the governing body decided to award full points, thus handing the title to Verstappen.

Why race in monsoon season?

Most people are of the opinion that running the Japanese Grand Prix in October when it is effectively their monsoon season, makes little sense. A big push is expected now to move it to earlier in the calendar to avoid any repeat.

On course to beat record

Verstappen though now looks unbeatable, and able to win from pretty much anywhere on the grid. He and his team at Red Bull have had a season of almost total dominance. This victory was his 12th out of 18 races, and his fifth in the last six. With four to go, it seems inevitable that he will smash the record for most wins in a season, currently held at 13 by his predecessor at Red Bull Sebastian Vettel and Michael Schumacher in his heyday.

Ferrari did mount something of a challenge, before their season imploded in a torrent of engine failures and strategy errors. Verstappen said after securing the title that he had very different emotions compared to last year. He admitted that he found it strange with how the points situation unfolded, but was “Just very happy we got to race in the end and very pleased to win for the fans.”

He paid tribute to the entire team at Red Bull who had contributed to his success and confirmed that whilst his victory last year was more emotional, this second championship was “more beautiful”.

Former champ not giving up

Lewis Hamilton who finished fifth congratulated his rival whilst adding he still had faith in his Mercedes team to fight back next year with a far better car, and be able to push harder and more consistently. He said they knew what the problems were and believed they would be able to rectify them for 2023.

Gasly furious over near fatal incident

Understandably, Gasly was shaken and very angry at his near miss. He rightly referred back to the sickening incident back in 2014 when Jules Bianchi went off the track and collided with a recovery vehicle and subsequently lost his life from the injuries he sustained. “I passed two metres from that crane, and if I was two metres to the left I would have been dead,” he said in an emotionally charged interview.

He demanded to know how the crane was not even on the gravel, but on the actual race track, before stating he believed it was disrespectful to the Bianchi family to still allow it to happen, showing that nothing had been learned. He added: “It is already dangerous enough, why could they not have waited one more minute to get back in the pit lane?”

Other drivers expressed their fury and disbelief after the narrow escape of Gasly. Perez described it as the lowest point seen in the sport for years, whilst Vettel said the authorities were lucky that death or serious injury was avoided.

Sainz pointed out that even behind a Safety Car, they are still doing incredible speeds and the drivers often cannot see anything; therefore it only takes a small switch on the steering and they would smash straight into the tractor, and inevitably it would be all over.

McLaren driver Lando Norris insists that whatever the outcome of any FIA review, there can be no compromises around driver safety, saying it was mind-blowing how someone could not recognise the potential consequences of their actions when making the decision to send out the tractor.

Champion will be looking ahead to join greats

Whilst that controversy unravels, Verstappen will no doubt reflect on a job well done. He is still young so will probably already be looking ahead to hopefully join Ayrton Senna, Nelson Piquet, Niki Lauda, Sir Jackie Stewart and Sir Jack Brabham as a three time champion, next time around.

He will be aware that after that record, his next targets would be four times winners Vettel and Alain Prost; five times winner Juan Manuel Fangio, before setting his sights on seven times winners, Hamilton and Schumacher.