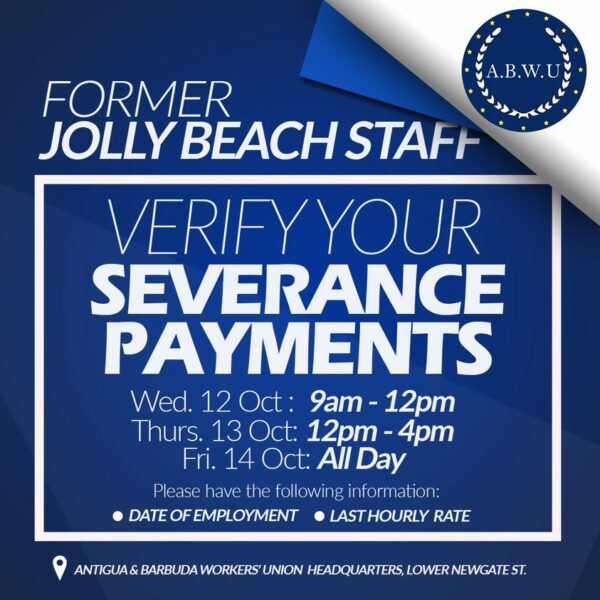 The Antigua and Barbuda Workers Union (ABWU) is currently verifying final payments for former Jolly Beach workers, on the heels of information from Finance Minister Gaston Browne that they are just mere days away from receiving their severance pay

The severance payments were made possible following an agreement with major hotelier Rob Barrette of Elite Island Resort who is reportedly investing US$6 million into the project. That money is a loan to the government which will be paid back over time

Browne said first on the agenda is the payment of severance to staff who were sent home during the peak of the Covid-10 pandemic in 2020.

But Chester Hughes, the Deputy General Secretary of the ABWU said the union will be meeting with former employees on Wednesday through Friday with the sole purpose of verifying their payments.

“We are meeting with them as of Wednesday at 9 a.m. We are meeting them from 12 on Thursday and all day on Friday. Having done that, we will verify with the receivers and provide them with the numbers, after which checks can be cut and they will receive their monies,” he said.

Hughes said the Union met with the employees last week Friday to discuss the issues of severance pay. He said up until then, then, there has been no confirmation that the funds have been handed to the receiver, nevertheless, former workers are being prepared.

“As I said to employees, this is a process. We have to do a verification of numbers now. We are verifying with them the numbers we have had in our possession of their severance. We have to then reconcile with the receiver to ensure what we have is what they have. Having done that then the checks will be allocated to the various individuals,” he said.

Hundreds of former workers, at least two of whom have since died, are collectively owed more than EC$7 million.

Government and statutory bodies alone are also owed around EC$80 million by the business which has been closed since the start of the Covid pandemic.