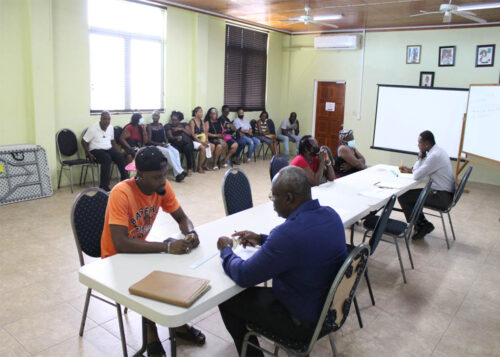 More than 200 former Jolly Beach workers were able to verify their outstanding payment with their union representative, the Antigua and Barbuda Workers Union (ABWU).

When the government announced last week that it had secured funding from local hotelier Rob Barett to renovate parts of the hotel and pay workers, the ABWU asked all former employees to verify their severance.

By Friday morning, the ABWU said more than 200 individuals were able to verify their outstanding severance amounts.

Deputy General Secretary, Chester Hughes, says the ongoing verification exercise will ensure that all employees are paid what is rightfully theirs.

Several former staff members have expressed relief that the severance dispute was now drawing to a close.

One young man, who was employed at the hotel for 10 years, said he was grateful to the Union for its relentless pursuit of the workers’ severance.

“They did a very good job! They stuck with us right through…I must commend them [for] pounding the government, [and going] through the courts…,” the young man said. A 62-year-old woman, who gave 12 years of service to the hotel, expressed disappointment at the protracted course of the severance dispute. “I’ve been home for two years and months without nothing…so I find that we’ve been treated badly,” the former worker explained.

The woman who takes care of her 92-year-old mother added that she and her co-workers had given their best to the Resort but were left to languish.

Hundreds of former workers, at least two of whom have since died, are collectively owed more than EC$7 million.

Government and statutory bodies alone are also owed around EC$80 million by the business which has been closed since the start of the Covid pandemic.