PM Browne to be featured on Netflix 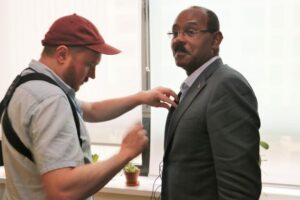 Antigua and Barbuda’s Prime Minister will appear in a Netflix film documenting the journey of small island states.

According to reports, Prime Minister Gaston Browne will be among a cast of expert sources appearing in the film, documenting the “grueling journey of small island states in dealing with the varied and deeply troubling issues of climate change”.

Prime Minister Browne used his trip to New York to share his insights with the film crew which has been in the process of shooting the documentary since 2021.

“The film will carry the working title, “1.5” – an appropriate choice as this is the temperature level that scientists have warned is the tipping point for climate change to reach the crisis proportions,” the statement from the office of the prime minister said.

Shooting on the film began during the frenetic lead-up to the 2021 United Nations Climate Change Conference in Glasgow, otherwise known as COP26. It will seek to take its audience behind the closed doors of the heated exchanges in securing climate justice for small states.

According to reports, Prime Minister Browne was sought after by other media outlets for his thoughts on the issue of climate change and his leadership in bringing the attention of the global community to the concerns of small states. Among the news agencies that secured an interview with the Prime Minister was the New York Times.

Meanwhile, the award-winning international climate reporter for the Times, Somini Sengupta, sat with Prime Minister Browne for over an hour to speak on the possibilities for the proposed Multidimensional Vulnerability Index (MVI).

The MVI seeks to improve access to concessional financing for countries like Antigua and Barbuda, especially in times of crisis.

In November, COP27 will convene in Egypt and this is expected to set the scene for the final stages of filming for the production that is expected to be released on Netflix in 2024.

Prime Minister Browne is Co-Chair of a UN expert panel on the MVI and also serves as Chair of the Alliance of Small Island States (AOSIS).