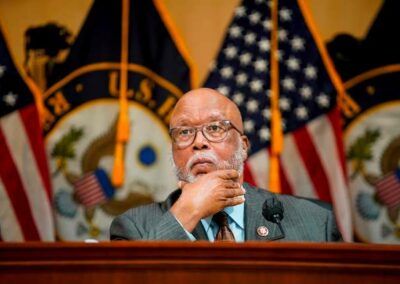 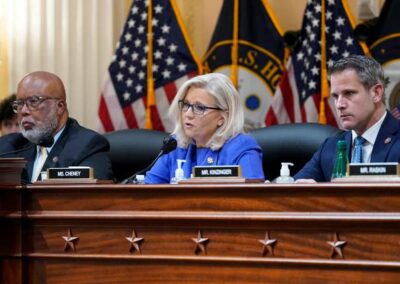 As the 2024 election draws nearer in the United States, the chances of former President Donald Trump reclaiming his former seat are becoming slimmer by the day. The latest of the many issues facing the former president are the recent findings of the January 6 committee, which is investigating the Capitol riot that took place after the 2020 presidential election.

The committee headed by Bennie Thompson made more damaging revelations about the former president on Thursday, claiming that he was aware he lost the election but wanted to declare himself a winner at all costs.

The chairman of the committee said the committee would unveil new evidence of how the former president tried to overturn the elections, and also show “never-before-seen footage of congressional leaders on January 6 working to coordinate the response to the violence.”

“Today, as in previous proceedings, my colleagues and I will present new evidence,” Mr. Thompson, a Democrat, said in his opening remarks.

Liz Cheney, a Republican and vice chairman of the committee, said Donald Trump was at the centre of everything that happened on January 6, 2020.

“The vast weight of evidence presented so far has shown us that the central cause of Jan. 6 was one man, Donald Trump, who many others followed,” Cheney said in her opening remarks.

“None of this would have happened without him. He was personally and substantially involved in all of it,” she added.

The premeditated plan to announce victory

One of the new revelations made on Thursday was that President Trump had made plans on how he would declare himself the winner of the election even if he lost the contest.

Committee member Zoe Lofgren said: “The evidence shows that his false victory speech was planned well in advance before any votes had been counted. It was a premeditated plan by the President to declare victory no matter what the actual result was.”

Rep Lofgren added that the committee interviewed Brad Parscale, a former campaign manager of Donald Trump, who told the committee that President Trump could have planned how he would announce that he won the election as early as July, even if he lost.

The committee discovered that other members of the White House were involved in the plot to announce an election victory before the actual results were released. One such person was Marc Short, then chief of staff to vice president Mike Pence.

“Marc had indicated to me that there was a possibility that there would be a declaration of victory within the White House that some might push for – and this is prior to the election results being known – and he was trying to figure out a way of avoiding the Vice President sort of being thrust into a position of needing to opine on that when he might not have sufficient information to do so,” counsel to Mike Pence, Greg Jacob, said in a video clip.

Trump knew he lost the election

Contrary to the belief that the election was fraudulent, the committee revealed that Trump was aware he lost the battle, but was only finding a shortcut to victory.

Cassidy Hutchinson, an aide to the White House chief of staff, Mark Meadows, told the committee that they could not see how the former president would push through with his claim and that Trump was aware he lost.

“I remember looking at Mark (Meadows), and I said ‘Mark, he can’t possibly think we’re going to pull this off. Like, that call was crazy.’ And he looked at me and just started shaking his head. And he’s like, ‘No, Cass, you know, he knows it’s over. He knows he lost. But we’re going to keep trying,'” Hutchinson told the House committee.

Former President Trump filed a suit before the Supreme Court challenging the election results, hoping that the apex court would overturn the outcome of the election. After getting an unfavorable judgment, Cassidy Hutchinson said Trump told the former chief of staff that he did not want people to know he lost the election.

Since the committee began its investigation on the matter, one thing that has become clear is that the capitol riot was not an organic reaction, but a premeditated plan to disrupt the activities of the day.

New Secret Service emails and messages revealed agents spotted guns in the crowd the morning of Jan. 6 before Trump was set to speak at the Ellipse. Why do they need guns at the Capitol?

The Trump supporters threatened to kill lawmakers if they certify Joe Biden’s electoral victory. Messages obtained from the pro-Trump website include:

“Patriots will be there, armed to the teeth. And if the filthy commie maggots try to push their fraud through, there will be hell to pay.”

“Our ‘lawmakers’ in Congress can leave one of two ways: 1. in a body bag 2. After rightfully certifying Trump the winner.”

Adam Shiff, a member of the committee, said among the messages received by the Secret Service agents was the threat to kill Vice President Pence if he did not heed the call of Trump and his allies.

The January 6 committee has heard testimonies from everyone but Trump. Family members, allies, members of his party, electoral officials, and even employees of the former President have all testified before the committee. The committee, on Thursday, unanimously voted that it was time to hear from the former president directly.

“[Trump] is the one person at the center of the story of what happened on Jan. 6. So we want to hear from him,” committee chair, Bennie Thompson, said.

“The need for this committee to hear from Donald Trump goes beyond our fact-finding. This is a question about accountability to the American people. He must be accountable. He is required to answer for his actions,” he added.

The vice chair of the committee, Liz Chenney, said: “We are obligated to seek answers directly from the man who set this all in motion. And every American is entitled to the answers, so we can act now to protect our republic.”

What that means is that the former president, who had denied all the allegations and accusations, will now have the opportunity to speak for himself.