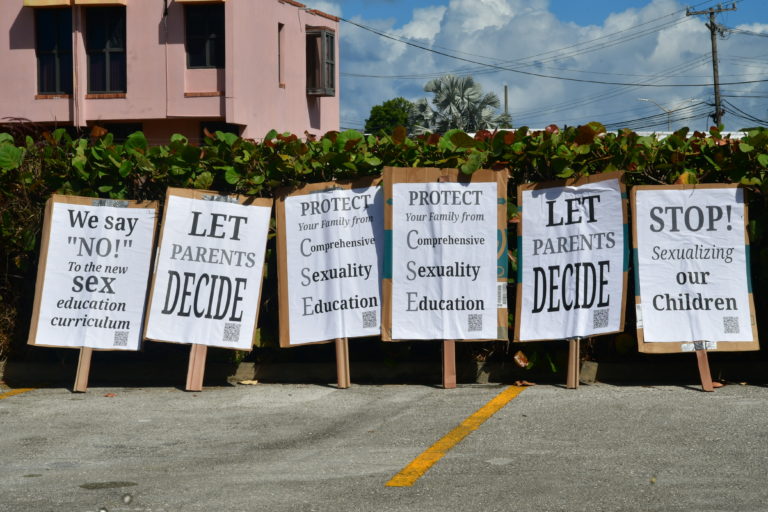 Parents in Barbados are pushing back against a survey that quizzes their children on sensitive topics like their sexuality and gender identity.

The Inter-American Development Bank is responsible for managing the survey that was sanctioned by the Ministry of Health and administered to 733 first-form secondary school students in Bridgetown.

On Saturday, dozens of parents took to the streets to express their disapproval of the controversial study.

Donning placards, some of which read, ‘Let Parents Do Their Jobs’, ‘Stop Sexualizing Our Children’, ‘Let Parents Decide’ and ‘We Say “NO” to the New Sex Curriculum’ the group marched to accompanying loud music throughout the main street of Bridgetown.

They marched the streets beginning from Kensington Oval just after 10 a.m. and arrived at Independence Square just before noon on Saturday.

Reverend Ferdinand Nicholls, a pastor at House of Freedom Ministries and one of the organizers of the protest, indicated that the protest may not be the only action that will be taken.

“I am a part of this protest because of the concern we have for the future of our children and the future of our country. Some may ask why we are protesting and we are protesting really with a dual purpose. We want justice for the parents and children of Barbados. What was done to the children of our schools was against the laws of Barbados according to Section 8 of the Data Protection Act and we want justice to be served,” he told an interview with Barbados today.

He said “we would like to encourage parents to file a class action lawsuit against the Ministry of Education, the IDB, and Code.org and we are calling as parents and families for the resignation of the Minister of Education, the Chief Education Officer, and anybody responsible for approving the survey that was conducted in our schools. An apology is simply not enough,”.

Adding, “we are saying no to the introduction of comprehensive sexual education in our primary schools, in our pre-schools and our secondary schools and yes to the teaching of a sex education based on an optimal house approach. Children are our future and as a nation, we have to create an environment in which they can flourish and grow up to be productive citizens, and confusing them with sex and gender ideology is simply counterproductive,” he added.

Among his recommendations, Nicholls wants the Mia Motley Government to let its stance be known publicly on the introduction of CSE in the school curriculum and to draft a sex education policy that identifies what is to be taught to children about sexual orientation, gender identity and the notion that sex is binary and gender fluid.