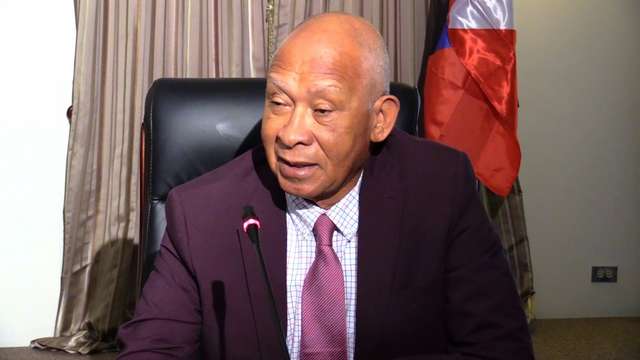 Chief of Staff in the Prime Minister’s Office Lionel Max Hurst is not convinced that the government owes the Barbuda Council over $8M.

Chairman of the Barbuda Council Mckenzie Frank said this week that the government owes about $8.2M in arrears of weekly and monthly paid workers and also some back pay.

“Mr. Walker [Trevor] has been making representation and he has come back empty-handed,” he said,

Mckenzie said workers are suffering in Barbuda and the economy is on a downward trend and “he as the prime minister has decided for some reason to leave us at the back of the queue,” he said,

But Hurst said from his recollection, the government owes the Barbuda Council only a few months in payments.

“I don’t know how he came to his conclusion but to the best of my knowledge, we owe them just a few months of remittances. He would have to show us how he came to that conclusion of the $8M figure,” Hurst told reporters

He said the auditing of the Barbuda Council came to a halt and loans were taken from the council’s coffers which were not paid back.

Another issue according to Hurst is that monies are being used by the Barbuda Council to pay legal fees.

“The council has taken large sums of money to pay their lawyers to fight the ABLP government. We consider that inappropriate use of resources. There’s no line in the budget to use remittances to fight the government”, he said

He said the Barbuda Council should not rely solely on the government to maintain its operations.

“They will make claims that we owe a significant amount of money but we believe that the Barbudans are responsible for raising revenue on their own. But they have not brought any projects to life that contribute in any significant to the resources used by the Barbuda Council,” he explained.

While the government said it is not hostile to workers on Barbuda, Hurst said the time may be ripe for those employed at the Council to look and think outside the box.

“We are not hostile to the workers they employ but they have about 200 people on the payroll and they are listed as cleaners. We think that it is done to ensure people have some kind of income in Barbuda. So now the PLH has employed lots of Barbudans more than 200 so the council has lost its monopoly on employment,” he said,

Adding, “opportunities are coming to Barbuda, we know that the Barbudans are smart enough to make the best use of them. They should not allow a blind allegiance to the party that now controls the Council to continue to make them dependent on it We will see major changes to Barbuda. We see they are coming and they are coming soon”.