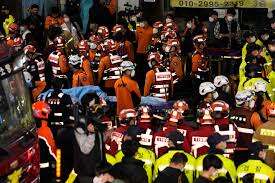 What started out as a celebration of Halloween, turned into a night that will haunt those who survived for a long time to come. Something in the region of 100,000 people had descended on the Itaewon area of the South Korean capital Seoul, excited at the chance to party again after two long years of Covid restrictions.

Masks were discarded, as a sense of freedom overwhelmed the district; but tragedy struck amongst the warren-like alleyways when one particular sloping alley became so densely crowded that people found they could not move, and a crush occurred, from which there have been so far 153 confirmed deaths. Many more were injured in desperate scenes, with the vast majority being teenagers, or twenty something’s.

Over-crowded streets behind the tragedy

The actual cause is still unknown, but sheer weight of numbers seems to have been at its inception. The Itaewon neighbourhood is a lively party destination in the city, with locals and foreign tourists flocking there every weekend, to the dozens of bars and restaurants. Halloween however, is notoriously one of the busiest nights of the year, and after the harsh restrictions of the past two years, it was probably inevitable that the numbers would be vast, but not to the size that it eventually swelled.

It appears that panic set in and people started to lose their footing, breathing suddenly became a real issue, as life was literally crushed out of people. The first confirmed death toll was issued at 02:30 local time with an announcement that 59 were dead, with a further 150 injured. Just an hour later the deaths had risen to 120 and continued to grow, soon passing 150, with the expectation for it to increase significantly higher still.

Bodies lined up still in their costumes

From nowhere this became a disaster and ambulances struggled to get through the crowd to tend to the injured and dying. The grim sight of bodies, many in Halloween costumes, being lined up along the street covered in blue blankets was the unbelievable consequence of what seemed such a joyous occasion, only minutes prior to it all going so terribly wrong. Strangers bravely tried to administer CPR to those lying unconscious, but in most cases to no avail.

Relatives and friends of missing people arrived at a scene of devastation and have been desperately trying to discover if their loved ones were there. Bodies of the dead have been moved from the street into a gymnasium, for family members to come and identify them, in what must be an deeply distressing situation. With so many victims, it is expected to take quite some time, and authorities are doing their best to keep some dignity for those who have tragically lost their lives.

Social media messages posted earlier in the evening showed some people remarking that the Itaewon area was so crowded that it felt unsafe, with unprecedented numbers flooding into the area.

Witnesses have spoken of their shock at how quickly it all unfolded and how suddenly the number of victims multiplied and outnumbered first responders:

Nuhyil Ahammed, 32, and an IT worker from India, lives nearby and had been to Halloween parties in Itaewon for five years running. He spoke of his astonishment at the remarkable numbers in attendance. “It was crazy, from 5pm there were too many people on the streets and I was thinking, what is it going to be like from seven or eight?” he said.

He explained that the sloping alley off the district’s main street was always incredibly popular due to its many good bars, but last night the crush was like a wave that couldn’t be held back. He admitted he had been really fortunate to get out having managed to climb above the crowd up some steps along the side of the alley.

Incredibly Mr Ahammed said that even hours after the incident others in the vicinity were still partying, with music still being heard coming from many of the bars and clubs just a few blocks away. It’s not clear if those venues and the clientele frequenting them, were even aware of the seriousness of what was happening just down the road.

Bystander tries to help but in vain

Another shocked witness was Ana, a 24-year-old from Spain. She had tried to leave a bar at 23:00 local time, but could not believe what she was seeing with dead bodies and the many injured. She said she went to try and help the best she could, listening to instructions being given to her on how to deliver CPR. “They were telling me how to hold their heads and open their mouths, and things like that, but sadly most of them were already not breathing so we couldn’t do anything.”

Some too young to identify

South Korea’s Interior Minister Lee Sang-min said some victims remained unidentified because they were below the age of 17, or did not have an adult ID.

President Yoon Suk-yeol announced a period of national mourning and said he felt responsible for people’s lives and safety, adding that his heart was heavy and he was struggling to cope with his grief. After holding an emergency meeting, the South Korean leader ordered a task force to be set up to help treat the injured. He also launched an investigation into the cause of the crush.

Other leaders offer their condolences and support

This is the country’s worst disaster since 2014, when a ferry sank killing more than 300 people.